Tatra FORCE Tow platform feedback.
This topic has been deleted. Only users with topic management privileges can see it.

Currently the newly added platfrom servers no practical use for two main reasons:

Solution for this one would be to make the wheel holder size adjustable with the fast control menu, however that would mean making the menu quite busy for being a fast control one. 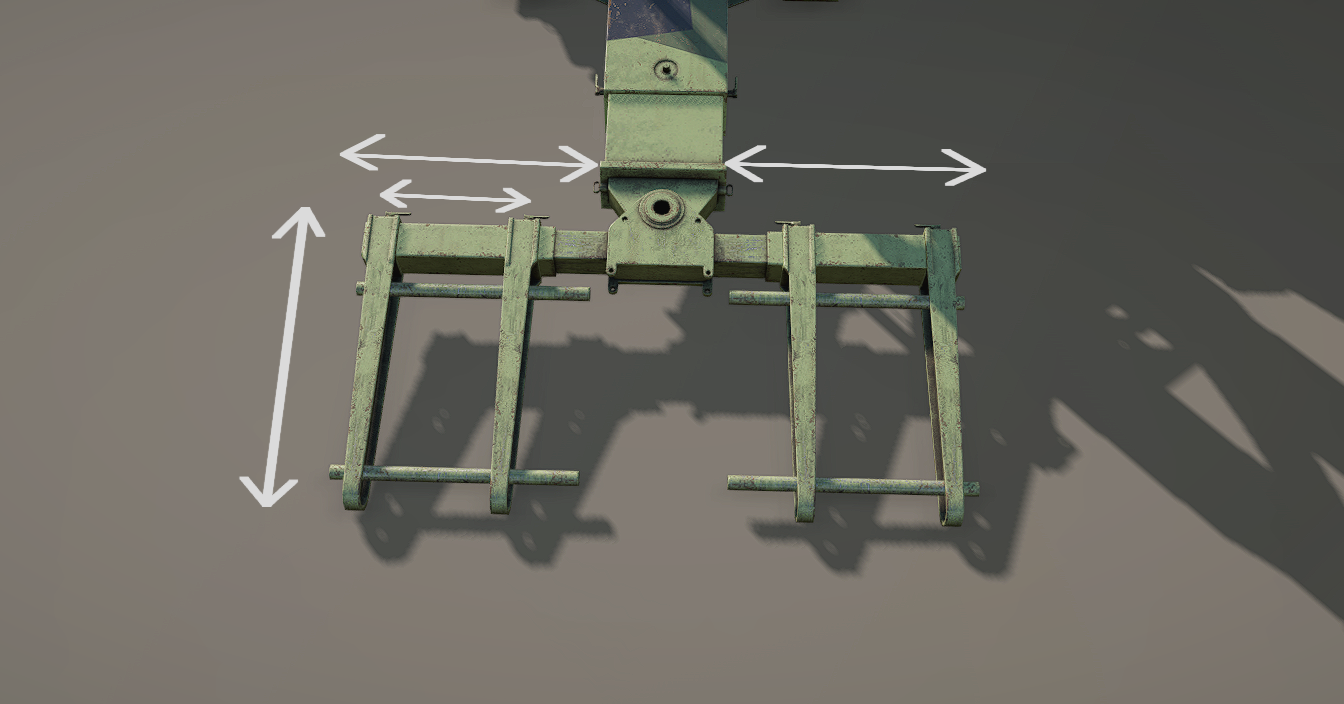 Solution here would need a similar system to packing vehicles, but instead freezing whole ride, just freeze the axle that is within the trigger of wheel holder on the towing platform, so the rest of the vehicle and its axles still behaves to the physic.

Alternatively, you could skip the first problem with the use of having auto-adjust of the wheel holders once the truck is "packed" on platform. Since you got the wheel size and distance between two wheels on an axle in truck's XML, this could be used to translate the dimensions on the towing platform.
In this solution of both problems, player would drive with their front or rear axle on the platform (which wouldn't need to be perfect or actually fit the wheel holders), "pack" it and see the wheel holders to automatically adjust to the size of wheels of towed vehicle.

Honestly, I think this is a wasted effort by the developers, because this type of tow package doesn’t make sense for Snowrunner. Why not go with an articulating large flatbed similar to The one RNGR runs on his mods, and call it a day? I’d get more use from the add on and probably more enjoyment.

Unless, I am missing some other cool feature, I’d scrap this idea and send it back to ground zero.

I think after seeing how easily you can worsen the recoveries in this game, the best option is to autoadjust the wheel anchors when you pack the vehicle, to make it more easy to handle

Apart of the wheel packing, this kind of add-on in real life can pack the vehicles by ataching directly to their axle or to their lifting points if they have any.
(You can see that happening in this video in 2:11min, they lift the tank packed on its axle and the other tatra packed on its atachment points, soo maybe ataching and packing directly to the axle will be a good solution)

Gaming Wheel’s new video demonstrates everything that is wrong with this concept. The towed vehicle doesn’t even make it out of the first turn. Surely this is a joke

@secelit3 Hope that this still work in progress and they will add the packing feature for the axle that sits on the platform.
It could be a really good mechanic in game because they theorically allow you to tow a vehicle with his trailer still atached, so you can continue till the delivery point with the wrecked truck and delivery the load, and if you can pack the axle on the platform you can still use your winch for other things.

But apart of this addon i think would be nice if we will have a rollback plataform too(like the one you say from RNGN), making us able transport smaller vehicles and be potentially available to more trucks because is not something as specialliced as this one on the tatra (for example the kodiak wich looks like the typicall rollback truck for transport wrecked cars)

last edited by treneroefc
B
B
blackjack01 Reply Quote

Similar towing platforms are mostly used to rescue heavy vehicles on the road, which is not suitable for the gameplay of this game, especially when the steering angle of the vehicle is also weakened. On the contrary, some of these devices are equipped with 2 or more winches, which can pull the rescued vehicle from multiple directions at the same time to quickly return to normal, which is what this game lacks.

Hope that this still work in progress 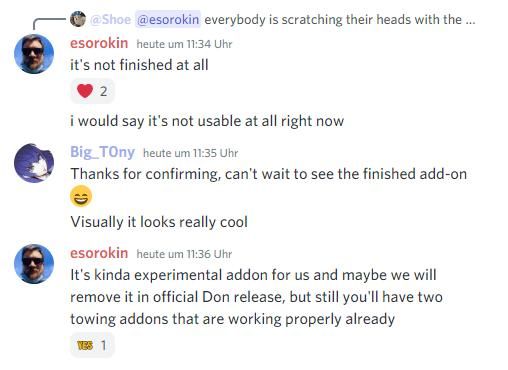 Evgeniy Sorokin is Saber's project lead for Snowrunner. These messages were sent 4 hours ago on the official Snowrunner discord.

By the way ... if you define that plate at the rear as a kind of platform, couldn't you "pack that truck" with the frontwheels on it? Rear should be then free spinning (similar engine off).

If you look at the sketch - expand it to a max, drive back, then close that until you get a certain resistance (see expansion of crane anchors). Then lift, autopack with lifting and you are done.

I do like the idea of a class having a crane plus rescue/repair capabilities. Could be a nice specialization for less loved trucks giving these a purpose in gameplay at all. See Derry 31, Step 300....

It's a great add-on to tow big trucks, if we can pack the axle on it we will be able to still use the winch and that kind of addon will allow us to tow the trucks with its trailers and load still atached, wich is very convenient because you can tow the truck to the unloading zone and finish the job.

By the way I noticed that currently the lift arm don't have the articulation that allow the truck to take curves while towing. 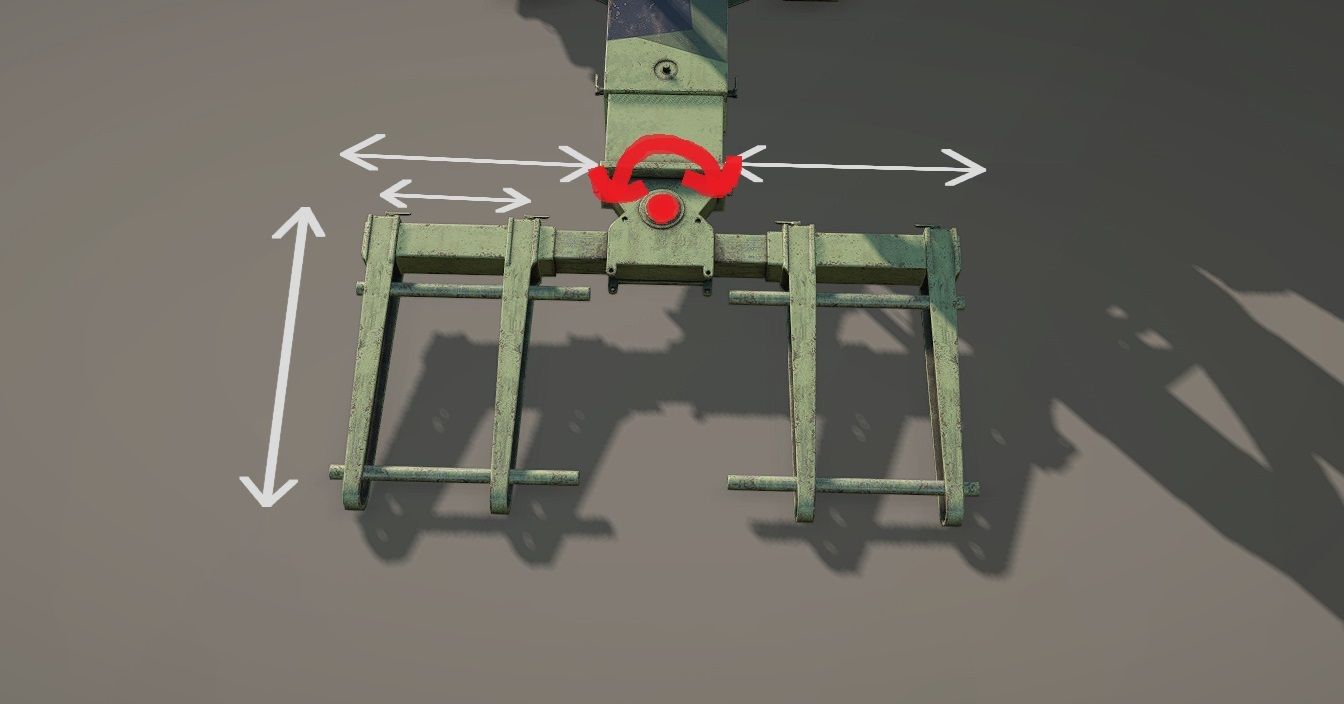 Will be nice if when the packing axle feature will be implemented once you pack the axle the lift arm activate that articulation point to be able to make turns when towing.

Hello the addition of the packing feature is great (Great work) but there is still a minor problem when using it, and is that the lack of the articulation, makes the set of trucks to rigid to be able to do the turns well.

@treneroefc oooh yes, the function of the pivot joint is not enough, it is simply impossible to drive on such a tow truck, and it is also impossible to go back, since the second car rears up, as if it is standing on the handbrake

Some of the heavies vehicles with big tires or long wheel track can be packed despite the fact they don't physically fit on the towing arm. Those vehicles are also heavy enough to not be able to be lifted (causing mostly physics bugs, like propelling the Tatra truck itself in straight line). Either implement here a more suitable means to pack and tow them, or exclude them from being packed on Tatra. 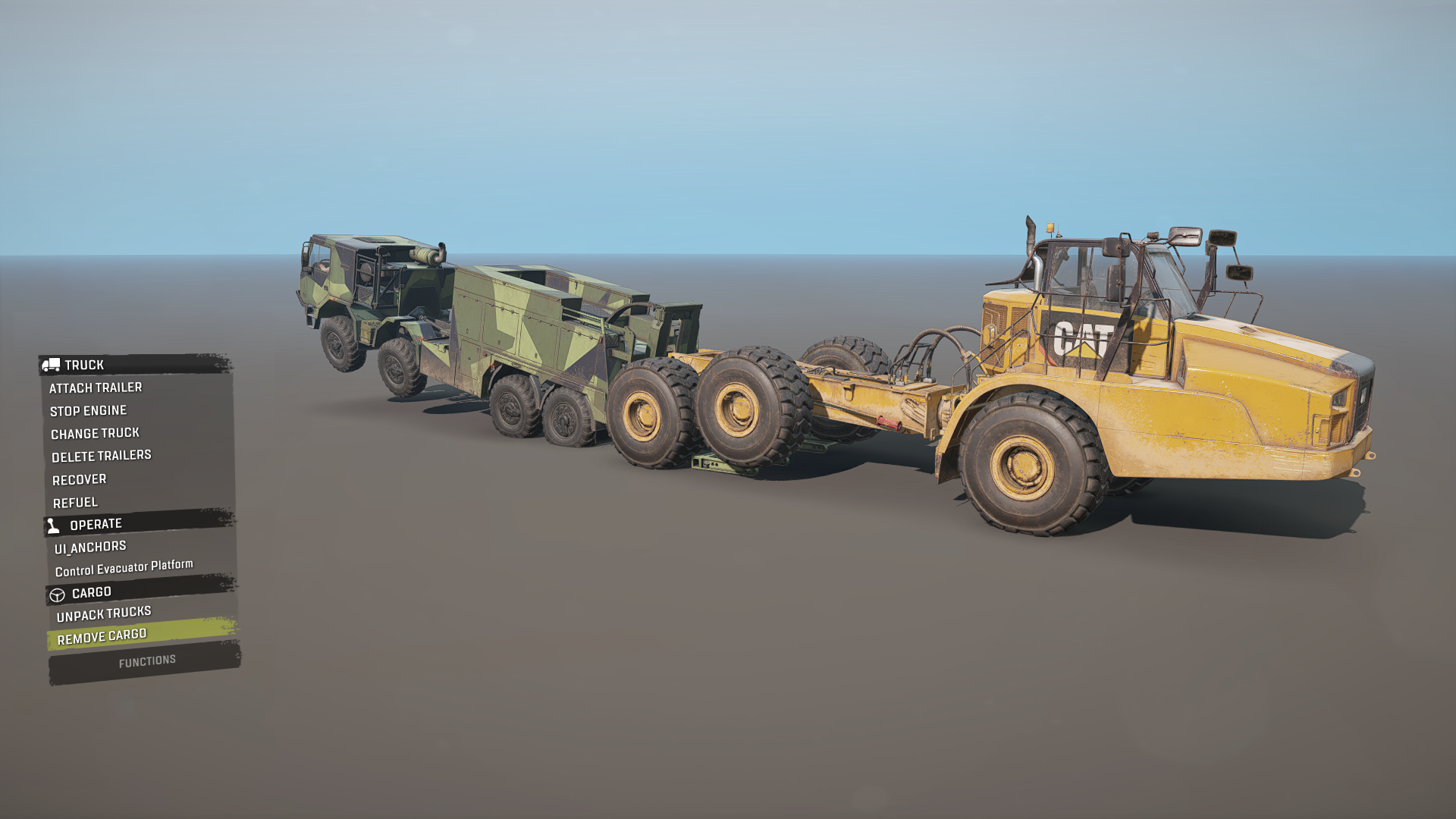 In previous versions of PTS, the arm besides being liftable, it was also able to be extended further, leaving more space for vehicle to pack, while there's not a lot of vehicles with cabins (and their bumper) much further over the front wheels, I'd say the possibility to extend the arm should stay. 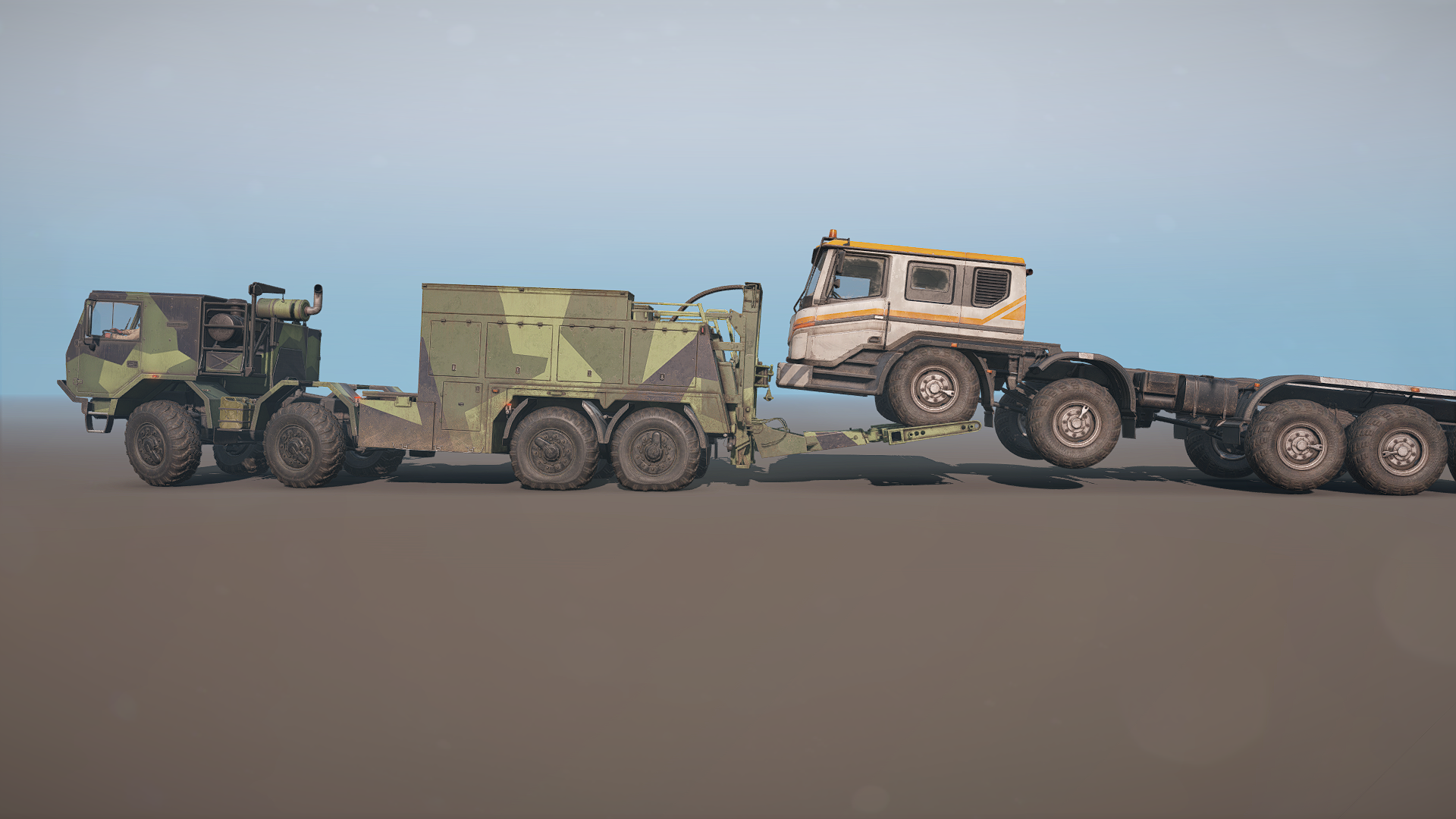 Azov has barely space between bumper and tow arm

As many people mentioned, the pivot on the arm should be free to rotate during towing. It should stay fixed until player packs the truck/trailer, once one is unpacked, it should automatically return to its fixed default position. 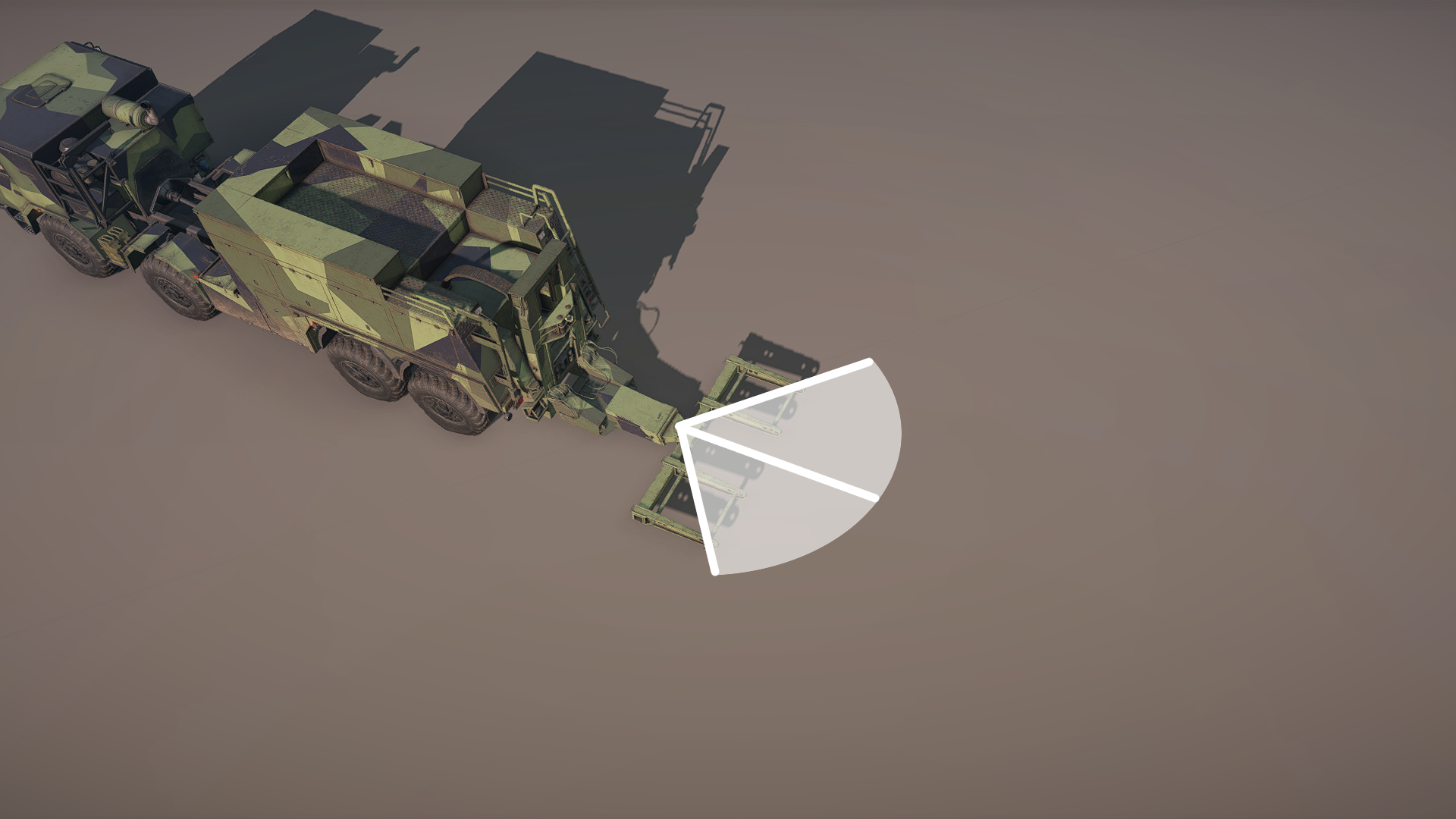 Additionally, from my testing, it feels like sometimes only one wheel is packed, it's really hard to record of screenshot the issue, but I hope it could be tested on your end (especially with debugging tools to show clearly if both wheels stay packed or not).
Once packed, the towed vehicle should have its handbreak released to allow smoother towing and reversing (with towed vehicle).
Sometimes it may be harder to get vehicles with smaller tires on the wheel holders, since the arm is always above the ground level; it cannot get below it (like the other towing addons).

I'm still wondering if it could be possible on your end to make the wheel holders automatically adjustable to the wheel sizes.
oh, and give the addon custom name and description, don't forget it

The arm itself need to be able to lower a bit closer to the ground, it is hard for the winch itself to pull some trucks on the wheel holders (ANK is example here).

The rotating pivot point on arm seems to work fine, with exception of several cases when towed vehicle with handbreak on makes it visually break/bug.

If they get this working right, I hope we can get a scout wrecker next.

As Big_T0ny noticed, this problem seems to only appear when the the towed truck is winched onto the towing addon, not when the truck is manually driven on. Universal solution regardless any possible state of handbreak when the truck is packed, is just to override everytime it to released.

just witnessed such couple yesterday, they made a quite a slowdown on a highway, moving 20 km/h due destroed zils left rear tire) 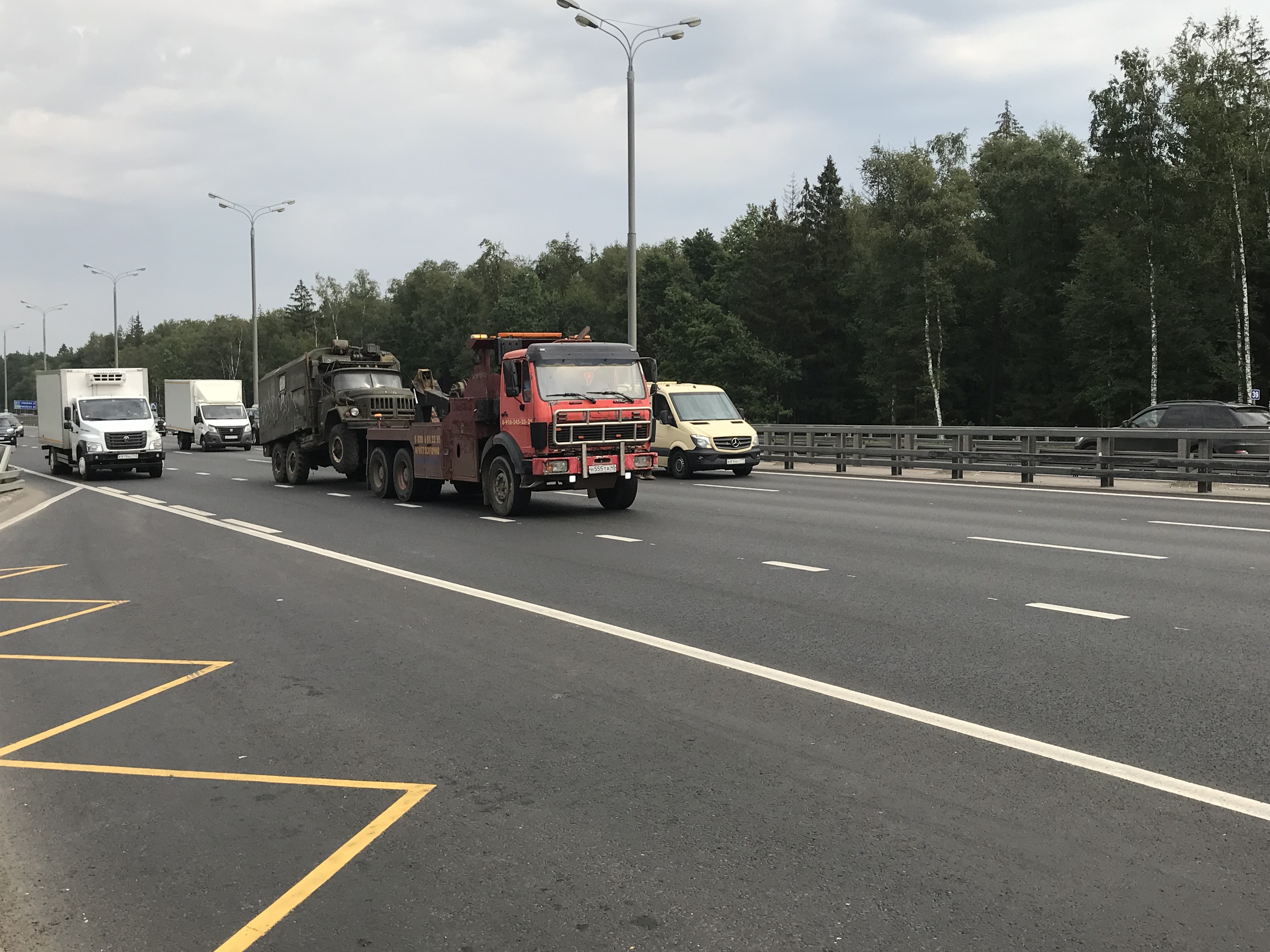 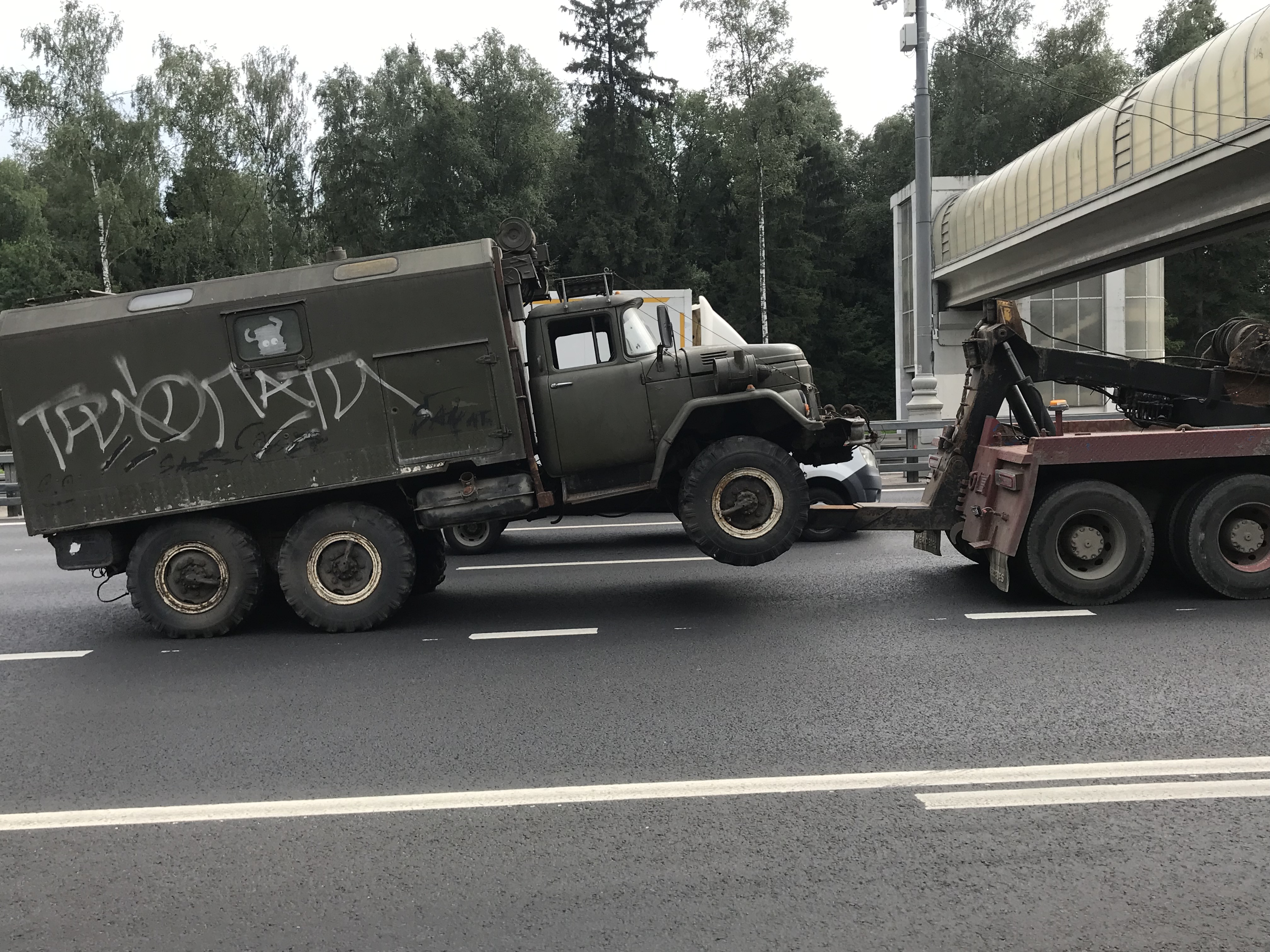 @Stazco
Tow arm is always attached to to the axle. And you want a heavy tow truck for such a job - wheelies to not look nice when you are sitting a tow truck.

@Stazco
Tow arm is always attached to to the axle. And you want a heavy tow truck for such a job - wheelies to not look nice when you are sitting a tow truck.

Then why we discuss the details of wrong tatra mechanism?
It must be redone to simply attach the arm to the axle beam/frame, easy solution, easy implementation, better handling and most important- realistic!

With at least half the trucks having "transparent" axles - so no collision? There is no way that these all get reworked. And then these trucks suddenly dont work on areas with lots of stones. Which would need also "rework" to have not only a few trucks being usable there.

Ok, realistically noone would ever take such big rocks right between the wheels, as glitching over may cause some glitches with driveshafts, the oil sump or your gearbox housing....

So keep cool. Its a nice attempt, I hope its better than the TH Forklift. Which is from gameplay point of view simply a desaster. It cant really do what its intended to do, but be abused as an "untippable" scout. Yeah.

My comment with "heavy" was refering to the "yea f750 or loadstar" statement. These could at the best tow an H2, Scout800, DON71, TUZ166 or similar small scouts and thats it.