P512 List of Issues and Feedback (12.5)
This topic has been deleted. Only users with topic management privileges can see it.
T
T
treneroefc Reply Quote

Hello i notice that the P512 can equip small crane + van body addon which is great because now we have another vehicle that can be use for rescue operations.
But i noticed that the crane has some clipping issues with the van body add-on, maybe for this combination would be better if it has a little more space between crane and van body or even best has the crane mounted on the back of the truck only for this combination. 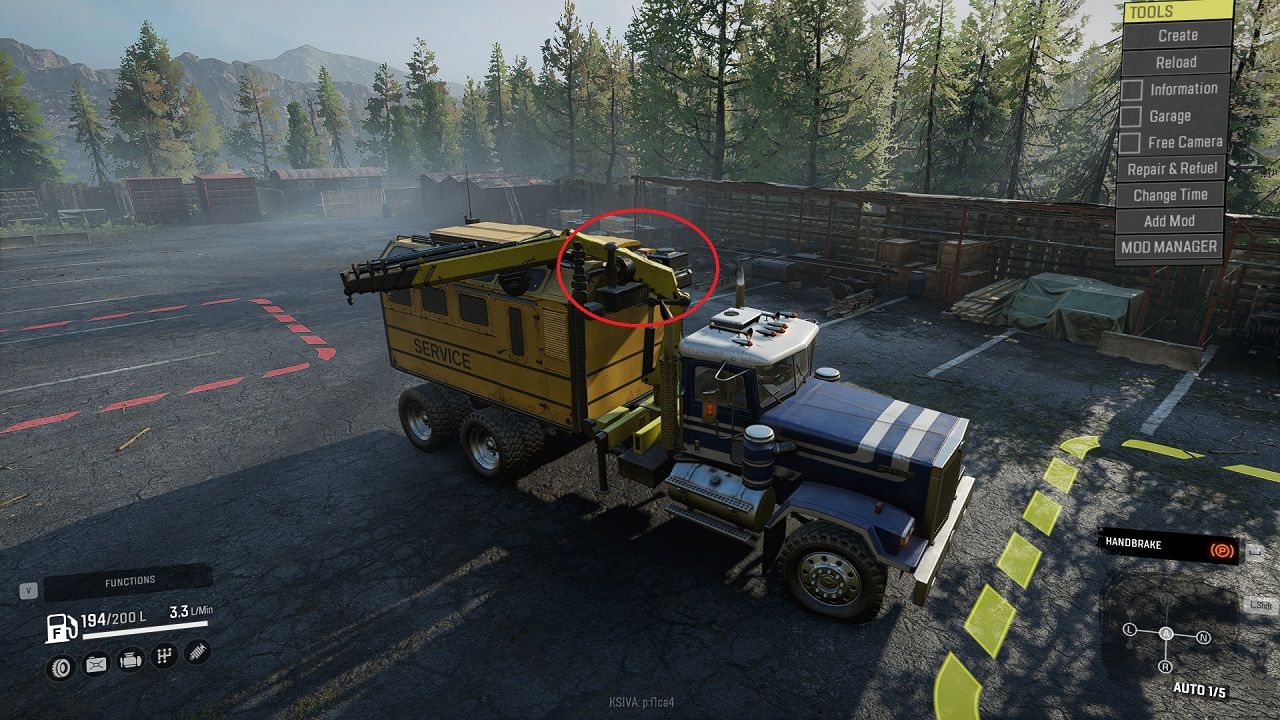 Other thing that will be nice if you add it, is add chained wheels as option, i think OHD I chained will be enough, and let the truck with only one tyre option but letting us chose between chained or unchained, that improve the truck a lot specially in snowy maps like Yukon roads.
And maybe you should consider increase a bit the fuel capacity because with the bigger engines the trucks has a poor range.

By the way I think that this truck is more suitable for heavy duty category than heavy category.

This truck should be able to attach trailers with crane + flatbed/sideboard combo, there is plenty of room for it.

Here is comparison with Fleetstar and Freightliner 114SD which are able to use trailers with crane + bed combo: 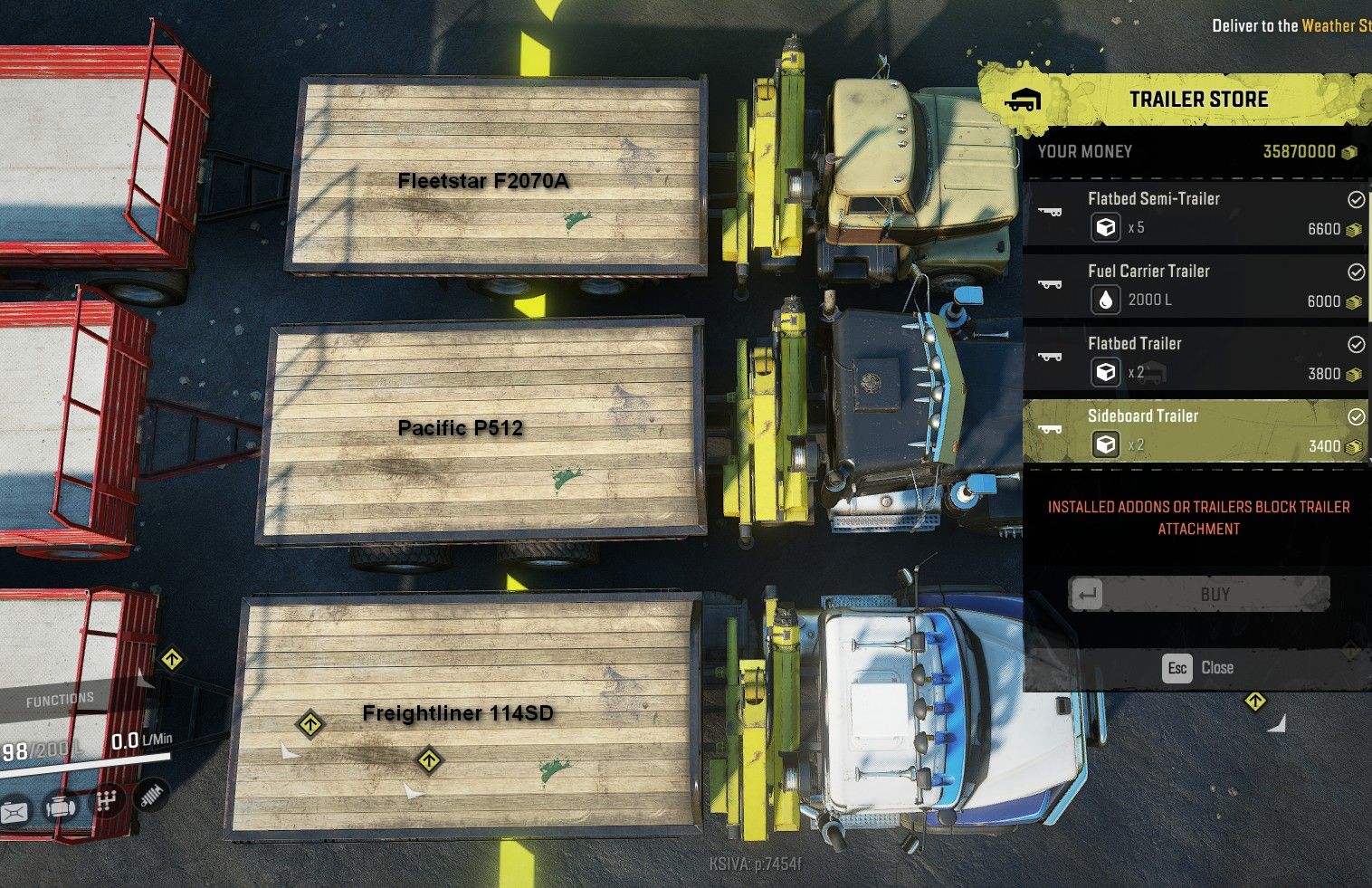 Pacific has better clearance between bed and trailer than both trucks.

Also, give it a bigger fuel tank please. I don't need another lawn ornament next to my M916A1.

If you are going to keep it in Heavy class, at least give it Heavy type winches like every other heavy truck.

Another problem is that it shows Offroad truck icon on the map, truck list and player list instead of Heavy truck. Same problem with Boar: 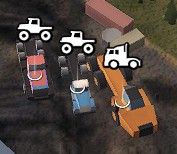 Other thing i'm still thinking that the fuel than should be increased a bit.
By they way why the change of category from heavy duty to heavy?

12.10
Fuel tank still too small.
Still no heavy winches despite being in Heavy class.
Still Offroad icon on the map istead of Heavy: I did not understand why the P512 was in heavy. XML says, its an 11 Ton truck. So perfectly in the 6x6 Range as Tayga, Grad, Azov 53. I would plainly move it to the "offroad" class or even "Heavy Duty" as its not exactly an offroad monster.

@JTT because they don't have to deal with real technical specifications

@IntruDeath
And what would be your suggestion for weight and power as well as tire traction as heavy stuff is usually poorly implemented / scaling with the stock tiresets?

i dont know...
i can't handle the principle of tires at all. you have tires with a profile where you think that nothing will work in the mud and mud and that is super great and then there are tire profiles that are the all-plus ultra for mud and snow, because they have "big shovels" incorporated and are absolutely not good for anything and then there are standard tires that are almost perfect.

I sometimes have 3 to 4 tires of one class, which are absolutely identical from the values ​​shown to me and only differ in terms of appearance and price, but sometimes behave differently. how should I know what is good for what?

In addition, there is my logic that large, balloon-like tires should be more suitable for sand, mud and snow than narrower or double wheels ... just somehow that doesn't really seem to be true.

you find, that P12 drive same as 512?
With the P12 everything wobbles in the terrain and you have to be careful not to tip over at any moment due to the "weak shock absorbers" which is not the case with the P512. In addition, I find the P12 totally weak as soon as it goes up inclines. Somehow it seems to me as if the power-to-weight ratio no longer fits at all. Despite the greatest possible powerful engine, many vehicles with a trailer hardly ever come up mountains in the slightly more difficult terrain and even on paved roads they shift into first gear ...

The P12 has the worst tireset of all heavies (20 tons, see https://www.maprunner.info/resources/torque-calculator), despite it has access to switchable AWD it doesn't help. Its best Engine has 210K torque, the 6x6 Vorons has also 210K. But for 11 tons. If you look or weight, power and traction: Its weight is the same as the TUZ420 and the torque similar. But the TUZ has traction, the P12 has practically nothing.

Center of gravity is high as you have noticed and the suspension settings are quite some junk. Its "damping" is also too low, very bouncy as a result - see the F2070A having a similar issue. Thats typical "XML" copy paste stuff for an early game truck being rushed into service and then "forgotten".

Had the P512 now for the logging missions on Michigan.

The good things first - if you have a small map and fuel stations, the truck isn't that bad. Bad news: Fuel Consumption in the high tens, 200l - you are pretty quickly out of fuel and you need still some spare fuel to get to the next station. Your felt "usable fuel" for carrying cargo is only 100l as 2 x 50l to a fuel station or from garage to cargo pickup is easily required. Especially as it has no AWD and is quite slow in any mudpit. So each difficult section requires way more fuel than some more potent trucks.

Second thing I do not like: The center of gravity feels wrong and comparably high. With the "center of mass for cabin" 30 cm lower - its ok. Even 15 cm is already an improvement.

Third: Unnecessary large turning radius. Not as bad as the Derry 31, but not exactly good. Feels as there is a lot of understeer. With 40-42° rather than 36 is remarkable difference, feels way better.

The niche it could fit: Less fuel consumption in the low tens or way more fuel capacity (I'd say 250-300l), it could be a range hauler on "not that bad roads" and as long as it has some grip there. It lacks also chained tires for icy regions. Without awd ice is really an issue. I was really searching for "why using this" rather than "its looking good". Not a waste of time, but nothing to pick. If you know its not too complicated and wanna have still a challenge, that truck is unfortunately a solid choice.

By the way, the Boar with its small fuel tank plus AWD/Difflock Penalty - same stuff with "felt range". Its running faster out of fuel than making miles. Still, one of the better "heavy, but not that heavy" ones.

My interpretation how these should have been designed.

Its never ever a heavy with 11 tons. But the good thing: P512 has access to heavy tires (twice the grip as "medium" ones) and it got a good grip coefficient. So that truck can work at all.

I still think loudly what happens, if you give it access to the special gearbox. So low fuel consumption and a lot of miles per gallon as long as the terrain is not too muddy.

The BOAR with "medium tires" is/was hopefully either a joke or I really hope a "copy & paste" XML bug. 20 tons with the grip of a White Western Star / ZIKZ / Step300 - yeah. Makes sense. Not.

I belive P512 should be rebalanced. Just a bit.