Japan Releases (Oizumi Amuzio)
This topic has been deleted. Only users with topic management privileges can see it.

I wanted to take the 11/28 release of 《A Plague Tale》 as an occasion to give some feedback regarding Japanese releases.

In The Surge 1, all audio except for English had been deleted (in a German game, why would someone do that), while at the same time all texts besides Japanese were removed. So popular play options like "EN dub + EN sub" or "original dub + JP sub" were not available.

A Plague Tale, on the other hand, offers the same options to Japanese PS4 users that steam players would have as well, which is really great. Moreover, the OK button was switched to ○ as players are used to (X would be abort in Japan).

The dubbing options do not only matter to me, it is fairly common here to prefer Japanese dubbing first and as second priority the original language of the devs or the game setting. You can for example see one of Japans most famous Letsplayers changing the game audio to French in the first minutes of playing the game (after being angry why a game would have deactivated subtitles as the standard option despite dub not being Japanese)
Youtube Video – [01:50..]

2) Release
The game had some PR on 4gamer and Gamespark, but not enough for people to be really aware of the game coming to Playstation. Moreover, there was no Preorder for the game which is about the only thing that guarantees some visibility on the PS store. No Japanese publisher releases a game without preorders. Not for the prepurchases, but for players to have it on their schedule.
But far worse, there was NO 新着(new release) banner for Plague Tale when it came out, which is a disaster. Sony must simply hate Amuzio or they both don't talk to each other, but discovering that the game has been released was only possible if one already knew. The store would not tell you.
What you needed to do was going to the store, then to new release, scroll through all 10 "Introducing" banners to land at the "Show all releases of the week" banner. Than scroll again because even among the 12 games released on 11/28, Plague Tale has been listed the last!
This is fatal and simply unworthy of a game like A Plague Tale, a title of high renown that received main features on Steam or GOG for a very good reason.

3) Some publisher options
In their Japanese release, 《World War Z》 did not have a preorder either but they DID have the release banner. That a Korean publisher (H2 Interactive) knows how to make their games being shown on Playstation Store Japan, but a Japanese Publisher (Amuzio) does not, is quite sad and telling. For the release of Control, Digital Brothers/505 changed from publishing via Amuzio to publishing via Marvelous, who then started preorder campaigns several months before the 12/12 release to raise attention.
Really fantastic inbound publishers for Japan are Spike Chunsoft (The Witcher 3, Metro) or DMM Games (Kingdom Come), because they know how to create a buzz and their localisation is really well written (including good dubbing) and of course there are Sony and Bandai.

To me it feels that the quality of FHI games has improved so much through the recent years and I am always a bit sad to see them not taking off in such an important market as Japan, especially when it is for reasons as the above.

Nonetheless good luck with the release of The Surge 2 on the 19th & Keep up your great work!

As promised, here my feedback regarding the release of The Surge 2, which so far looks really promising.

The game is directly featured in the category 人気コンテンツ (Popular), which is one of the first menus in the store and easy to see. The banner received the 3rd position and is quite big. 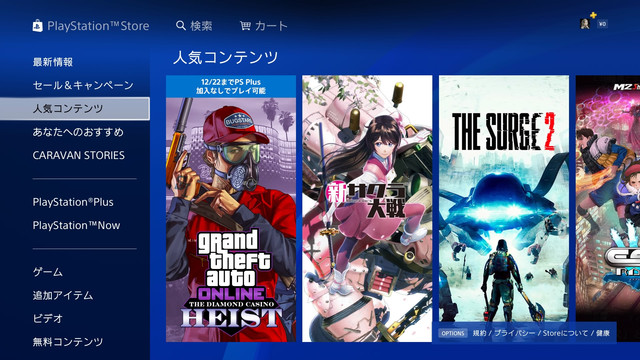 The game is moreover displayed under Game > 新着 (New releases) in 5th position, with a smaller banner but still easy to see. 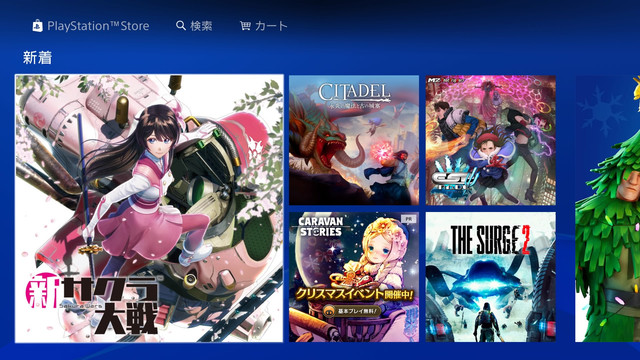