Community Update #2– Chaos Campaign Mechanics
This topic has been deleted. Only users with topic management privileges can see it.

Last week we introduced you to Malos Vrykan and Arkrist Vane, the new characters in the Chaos Campaign. Now, we dive into the mechanics that you will encounter in the Expansion. The separate free update arriving with the Expansion will bring improvements to the campaigns across the board, and we’ll take a look at these next week in a final blog post.

Corruption: This is the main currency in the campaign, and works similarly to what you’ve seen in previous campaigns. You’ll use it to build and repair ships, build defensive structures, etc.

Gift of Chaos: As you conquer systems, it is prudent to pay tribute to the Gods of Chaos, as pleasing them will earn you their Gifts of Chaos. The Gift of each God is unique, and the power conveyed significant.

Spending a Gift of Chaos will apply the respective God’s curse to a system of your choosing, as follows (exact numbers are not specified since they are subject to change prior to launch):

Khorne’s Anger: Khorne inflames the dormant rage within your enemy into uncontrollable fury. Taunts an enemy fleet and forces it to perform an assault on a random adjacent system (it will only attack enemy fleets, not its allies).

Nurgle’s Rot: Nurgle’s atrophic influence worms its way into the enemy fleet. Reduces the Fleet Power of the fleet in an enemy system.

Slaanesh’s Slavery: Slaanesh undermines the resolve of your enemy with false whispered promises. A random enemy fleet must move to an adjacent allied system.

Tzeentch’s Shifting: Tzeentch pulls the threads of fate and creates an invasion in the selected system.

Marked Fleets: Gifts of Chaos can also be spent to hire a Marked Chaos Fleet, which have four additional skills and four upgrades. Each fleet and its admiral is different depending on the God, which is reflected in the skills and upgrades they have. For example, a fleet marked by Khorne can have the Khorne Berserkers Upgrade, increasing the critical assault chance of boarding actions by 20%.

Due to the power of these fleets, it’s important to pick wisely, depending on what your strategy is... or what God you favour. 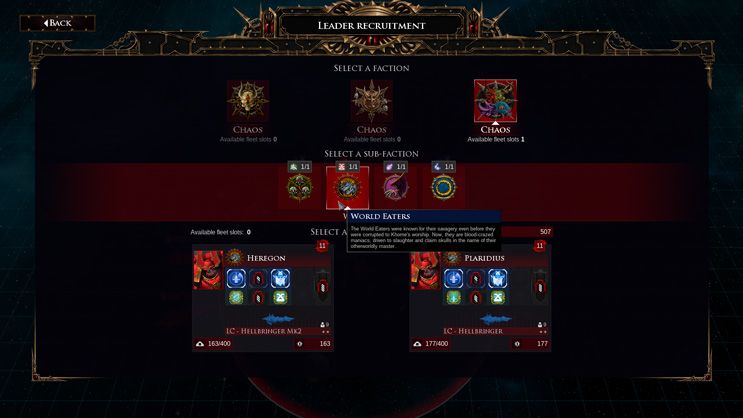 Pleasing the Chaos Gods will grant you their Gift of Chaos. How you do this is up to you. Captured planets can be offered up to the God of your choosing. You can:

Performing each of these actions significantly raises the cost of upgrading the planet. Upon making the offering, the God in question will grant you their Gift. The number of Gifts you receive depends on the bonuses and penalties of each planet. Certain bonuses provide extra gifts, while penalties never provide any Gifts. It’s up to you to decide whether upgrading your planets faster is more important than offering it to the Gods. 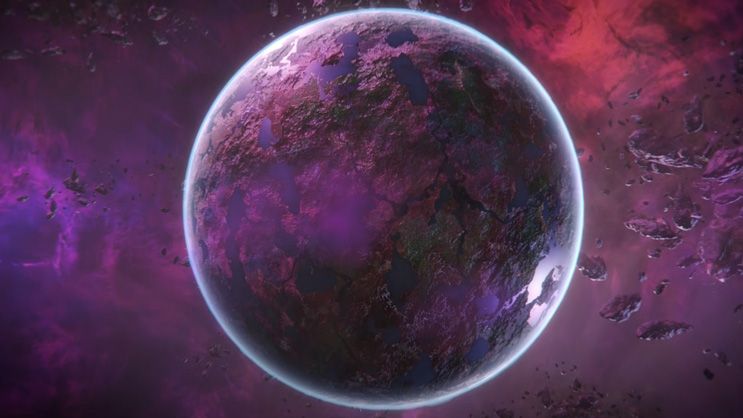 After reaching renown rank 3, secondary missions will start to appear in battle. If you accomplish these missions, you receive Gifts of Chaos. Only one secondary objective may appear in each battle.

Khorne: Blood For The Blood God!
The player must kill X troops on enemy ships.

Slaanesh: Dark Ritual.
A selected player’s vessel (not an Admiral) must not suffer any boarding action.

Tzeentch: Veiled Portal.
Defend a Chaos Portal throughout the entire mission. The Veiled Portal is a unit that can be targeted by enemy ships.

We hope you enjoyed this taste of the basics of the major new features in the Chaos Campaign! Further changes, including balancing, will arrive in the free Update. Look out for the blog post covering these changes next week! Please keep in mind that the details of the features described are subject to potential change prior to launch.

So now there are 3 chaos factions? I assume one is undivided and one is the divided. What about the third?

@Aram_theHead Maybe its more like daemons, astartes, and the lost and the damned? Or certain legions?