Skalgrim mod v.1.3 released!
This topic has been deleted. Only users with topic management privileges can see it.

So the lastest version of my mod is up and ready for download. Enjoy. 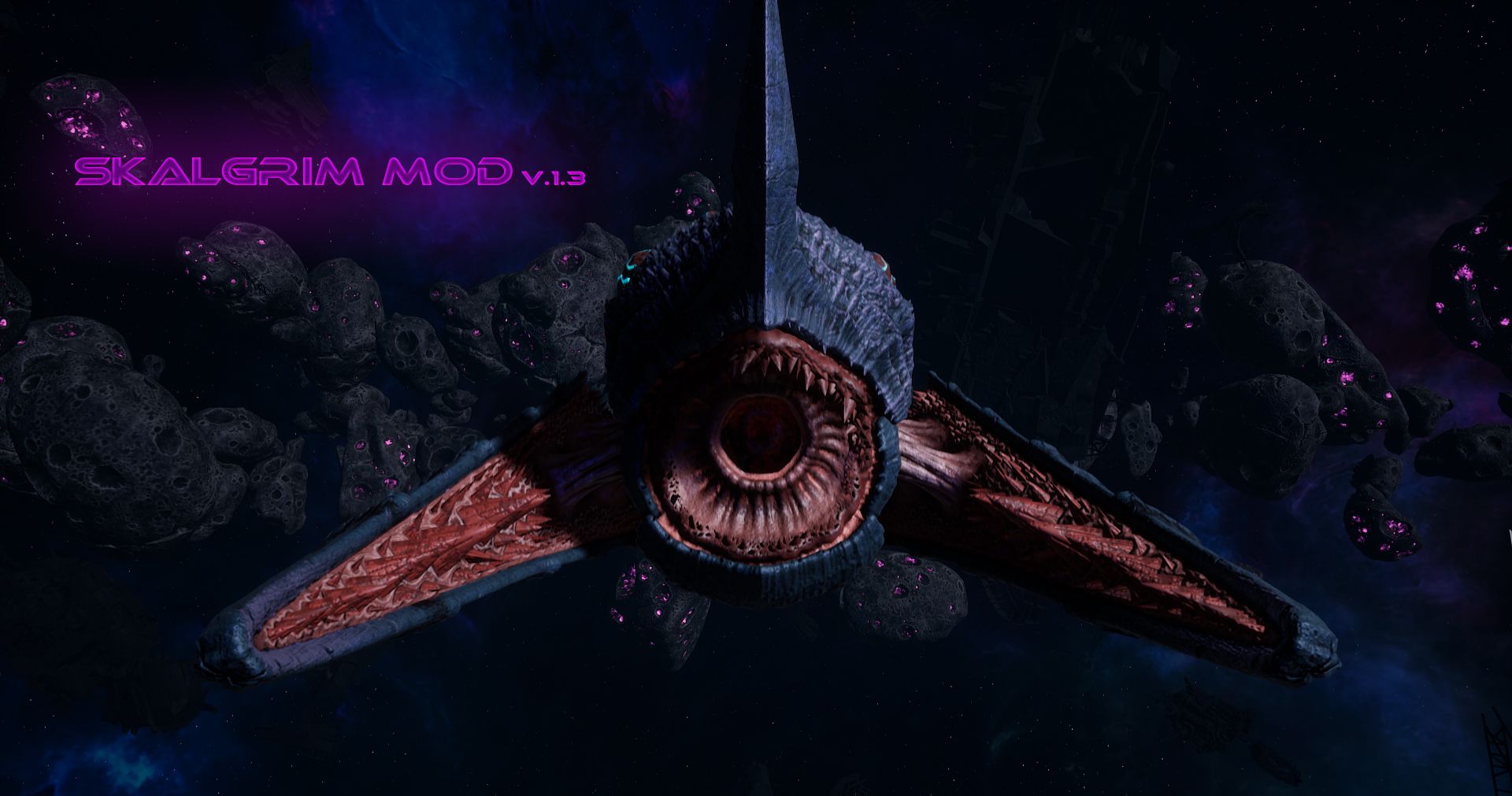 This version of the Skalgrim mod includes several new ships, balancing and further work on the original mod.

Skalgrim mod changes stats for Ordnances like fighters and bombers, decreases their reload time and makes them better and more worth the points spent on carriers. It changes the stats for weapons, units, and campaign related things. It rebalances the game and makes for several times larger battles by both lowering shipcosts and increasing the amount of points available for both fleets and battles.Fleet sizes grow with levels just as in the original game, but to much greater sizes. You can also have more fleets. It rebalances critical hits, making bigger ships more resistant to crits. It rebalances morale, but increasing the rate at which morale regenerates, and several morale related effects. It buffs many abilities, meaning that your choices matter more as a admiral.I'v rebalanced the difficulty levels for campaigns as well. If you want a challenge, its yours for the taking.

The Skalgrim mod does not strive to be perfectly balanced, but guarantees massive battles unlike that in the original game including some new content. Balancing and changes are also an ongoing project, so check back for news. Im just one guy working on this mod so don't expect to much.

New Campaigns should now be easier for the first two battles, and you should no longer be outnumbered by a 2:1 ratio.

Heavy Artillery Lance Turret has been nerfed to 376 damage from 416.

Speranza, a Battleship for the Admech. Replaces the Endurance Light Cruiser.

Major rework of Admech forces that buffs weapons, and differentiate their cruisers as follows:

Dictator Cruiser - Carrier with 4 launch bays and one Lance turret.

Lunar Cruiser - Gets to keep its Nova Cannon. Increased price because of this.

Necron ships are faster, have faster turnrates, higher and faster regen, crewcount, regen of crewcount, better weapons, and can jump farther and faster. They are the OP faction that others should fear. But their ships cost alot more now than any other faction. You will always be outnumbered. "Good" I hear your inner Necron Overlord say, "more chattle to strike down."

This is a behemoth, massive, slow, but with more weapons and range than the standard Cairn. Including the new Weapon Defensive Particle Whip.

Weapon Defensive Particle Whip has been nerfed to 725 from 825 Damage. Reload has been decreased to 23 seconds from 25 seconds.

Necron Ships have been increased in price.

I'v redone Tyranids from the ground up with a major overhaul of the faction. They now have much better weapons, all ships have a constant regen, they deal more damage from their shields, they are faster and can turn faster, and their abilities have been buffed just like the other factions the mod affects. This has made them into a very dangerous foe. They also get some new ships.

This behemoth is a true monster. Gigantic -while lacking in bioweapons- its bulk and its added Tyranid propulsion abilities, its Ancient Psychic Scream, its Hooked and Feeder tendrils combined with its resilliance makes this a terror on the battlefield. Be aware though that unlike other Tyranid ships it cannot cloak itself due to its vast size and will as such be a prime target for enemy fleets and heavy weapons and ordanance.

New Battleship: Bioplasma Hiveship that only has Bioplasma weaponry. (Replaces the Hiveship)

New BC: Swarm Ship that only has the Feeder/Hook Tendrils, and lots of shields (1200) meaning that this ship can soak lots of damage and deal lots of Area Damage over time. (Replaces Corrosive Tentacles Devourer Epsilon)

New BC: Hardened Clutch Devourer that only has massive claws for close combat damage. It is a specialized ship that is much faster than other Tyranid ships of the same class, has more life and armor.(Replaces Corrosive Clutch Devourer)

Also note that all ships that have any of the Claws-weapons are faster and geared to actually use this weapon. Ships with Hook/Feeder tendrils do more damage/troop damage etc. Pyro weapons do more critical = flame damage etc.

This will be subject to balance for the next version of the mod as always.

Pictures for new ships are still the old ones. They can (sometimes) be unlocked in the campaign as if they were still their old ship-classes.

The Endurance LC for Imperial Navy uses the same name-instance as the Speranza. Its called Speranza now.

When playing Necron Campaign the first battle will put you against a Speranza class Battleship - To win this battle stay back and only use necron fighters/bombers. Alternative you can wait with installing the mod until you have completed this battle and saved your progress.

Important information:
This is made for single (skirmish and campaign) play. Using or trying to use the mod for online (multiplayer or singleplayer play might get you permanently banned unless you deactivate the EAC as per installation instructions.)

NOTE: You can probably play this with a friend- if you both have the same mod version. Have not tried it.

Its higly recommended that you start a new campaign even with changes of modversion (easy has been made a bit easier for the n00bs) at normal or hard difficulty (have been made harder for the pros). Certain ships, defence stations etc will otherwise keep their old stats and not be completely affected by the mods changes.

1: Pray to the Omnissiah.

2: You need change the launch options in Steam. This is done by right-clicking on the game in Steam - Then selecting properties - Then Set Launch Options. Here you need to write -NoEAC . Good, now you need to start up the game. It should read Stormancer disabled in the top right corner. If it does, you are now free to start installing the mod.

3: Make a safe copy version of your gamefiles.

Copy all files in Battlefleet Gothic Armada II\BattlefleetGothic2\Content\Data and \Content\Localization and \Content\Splash (your games install directory) create a folder somewhere for them and name it whatever you want. This is your original files, swaping them with the modded lets you go back to previous configurations if you so wish. Also note that during updates of the game you might need to replace files from your modded versions with the newly added ones from updates if you want the mod to work.

2: Extract Skalgrim Mod from .rar file. Replace all (or selected) folders and subfolders and files with the ones in the rar-archive.

3: Pray to the Omnissiah.

3: Play and gasp in wonder as your might fleets lay waste to your enemies.