Sandstorm Tutorial Bugs
This topic has been deleted. Only users with topic management privileges can see it.

Eh, I'll move this to Technical. It's more bug-related.

So, I loved Insurgency: Source's Tutorial, and I'd love Sandstorm's to be the same. At the moment, though, it's kind of broken, so here's what I wrote down while fucking with the Tutorial in-game:

Note: All of the Objectives I list are actually the real Objective names (I think) and not the ones provided in-game. The in-game ones technically end at Mike, but the actual objectives end at Victor. This is because each Tutorial location indicator is technically an objective.

-> The Tutorial used to start with a black screen, and then the black fades off and you see Mikee yeeting about in his chopper. Now, there's no black screen and it can fuck with the voiceover timing if you go too fast.

-> You can actually resupply right at the start of the Tutorial, in the spawn area. Wasn't something you could do IIRC.

-> You can mod your G36k or M9 (which you couldn't do before, IIRC), but you cannot change what pistol you have equipped or unequip your G36k. You can also change explosives, gear, etc.

-> At least for me, the game lags on every bot spawn. Hard. Every time I kill a bot at the counterattack on Romeo, for instance, I'm guessing another spawns in instantly because I get lag spikes on each kill.

-> Bots have several seconds of damage immunity upon spawning in at Objective Hotel (the first building you have to clear). This can really fuck you up if you breach too fast (i.e. door charging).

-> A couple of bots are in spots that don’t really make any sense.

-> If you switch to the Commander prior to Objective Sierra (where you have to switch to Commander), you have an annoying problem. You have to first resupply as a Rifleman, and then Resupply as Commander. This takes a couple minutes using the resupply box.

-> During the counterattack, make the tree leaves and branches act as a solid barrier to the enemy bots' line of sight. Currently, enemy bots can see you and shoot you through the tree branches and leaves, and it's virtually impossible to see them, even with the SVD or PKM's PSO and ACOG scopes, respectively.

-> The Insurgent Technical that spawns after the Gunship support call often doesn’t get driven up to the bridge, where it is then supposed to be blown up by Assassin’s rockets. In many cases, bots ignore it entirely.

-> Sometimes, Assassin actually gets shot down lmao. It's pretty rare, but I've seen it once or twice. 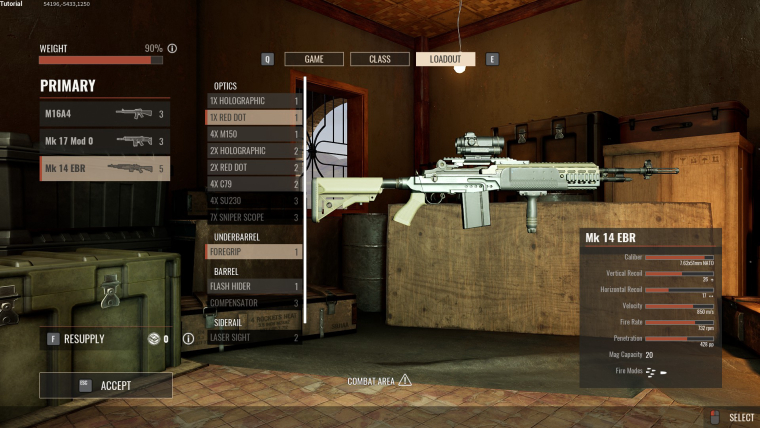 -> You should probably cap how fast you can turn the Dshk on the Techs. I can hit a mouse button a couple of times to boost my DPI and just yeet the damn gun around.

-> The Security Technical you jump into on Objective Tango still occasionally crashes into something at the end lmao. It’s much better overall, though, when it comes to running into shit. Honestly, this seems to have gotten worse.

-> Also, using the Admin panel and either restarting the round or switching teams really fucks up the tutorial.

EDIT: As of April 10th, I've got more bugs in the Tutorial. They're listed under the black line here.

-> At the start of the Tutorial, some weird UI shit pops up now. Two "unknown" weapons and mags for my G36k that I don't have. 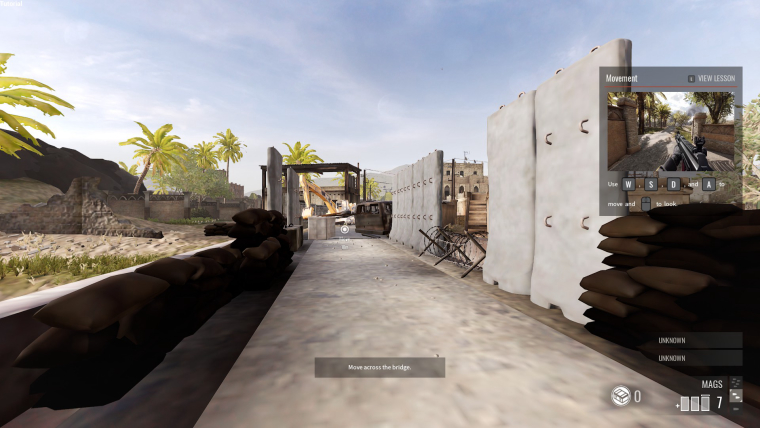 There are several bugs right at the start with the first Insurgent you have to take down.

-> If the Insurgent kills you, then you respawn back at the bridge with the M4 again. However, this M4 lacks weapon attachments that the original one had: 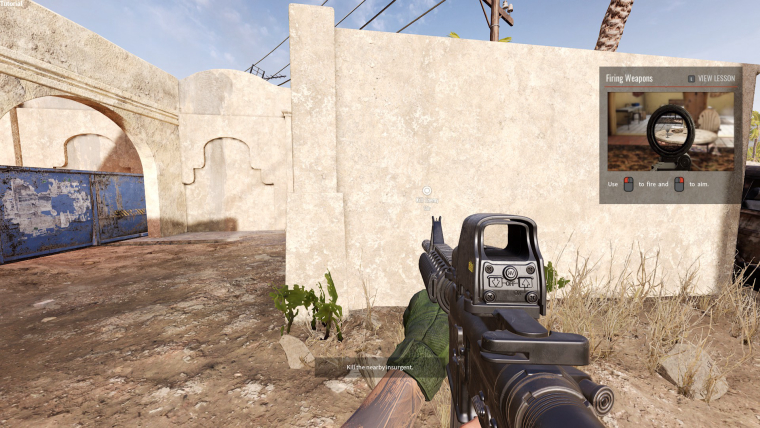 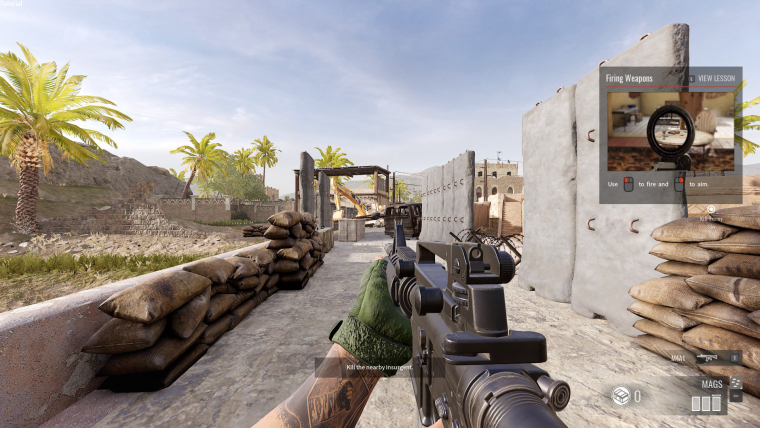 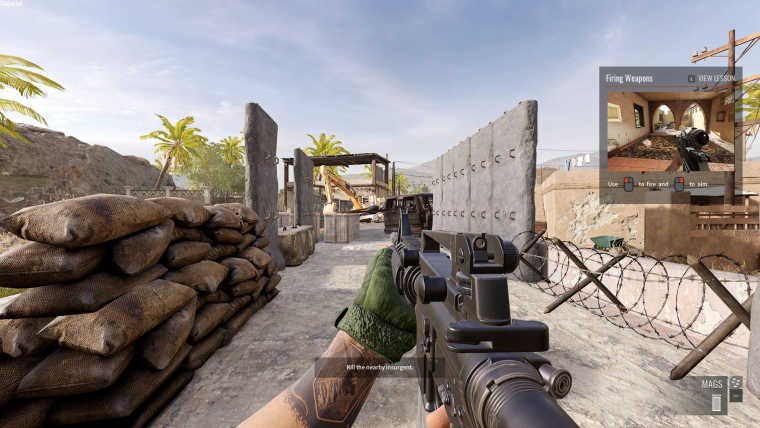 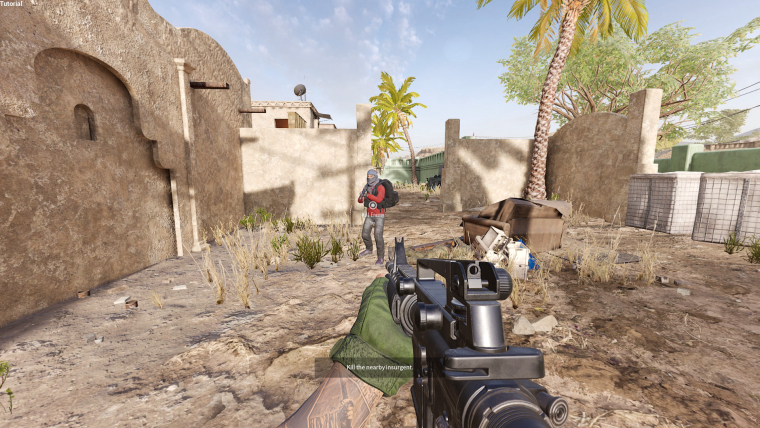 -> If you kill the Insurgent, but he fired off his entire mag, then you cannot scavenge the mag out of his gun and cannot continue with the Tutorial. 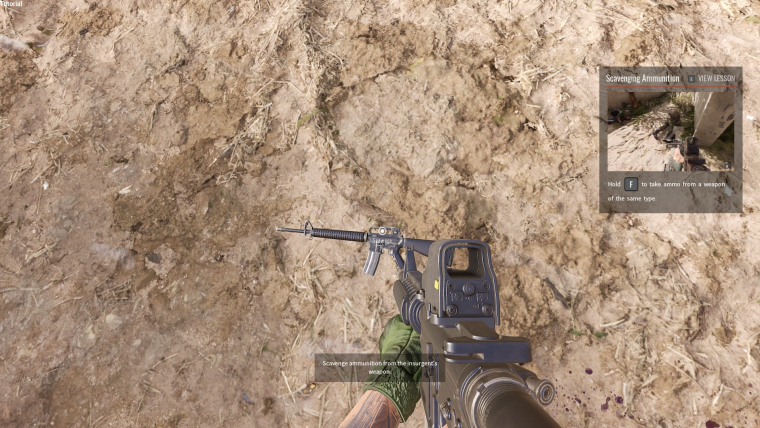 -> You'll trigger the audio to rig the weapon cache upon entering the room with the cache. However, this audio will trigger even if you've already blown up the cache.

-> If you happen to die while on the objective to call in the Gunship Support, Mikee will repeat the previous voice line to call in a Gunship two times. This happens every single time you die until the Gunship call is over and completed, as far as I can tell.

-> Somehow I managed to really fuck up one of the Technicals at the end by just moving around on top of the hood. Sent the bitch flying. Also, the Techs seem to run into each other at the end multiple times.

-> One more thing: Once you regroup with your teammates, you don't have to fire a single bullet for the rest of the tutorial. Your teammates are invulnerable and can kill every enemy for you with ease. Doesn't really match up with the Ins2014 tutorial. Mikee was unkillable in that one, but there was actually a punishment for dying instead of just instantly respawning (AKA you were forced to start the attack from the last checkpoint). Being able to indefinitely respawn in the tutorial in Sandstorm with no consequences doesn't really teach the player anything.

Bumping as the tutorial is still bugged.

Thanks for the list! I'll pass it on to the team!

@chaton Gonna bump this one again. Not only are these bugs still in the Tutorial as far as I'm aware, but there's a bunch of other ones I found as well.

These new bugs are all listed under the solid black line.