Campain ecomomics
This topic has been deleted. Only users with topic management privileges can see it.
M
M
Madtoffel Reply Quote

I don't know if I am doing something wrong, but while playing the imperial campain at medium difficulty and I am nearly broke and loosing money all the time. I am at the point in the campain where you get these huge Tyranid invasions everythere and have to kill these chaos champions, but I only have 5 fleets with about 4-600 points which all exept one only have cruisers. I have unlocked battleships a few turns ago but can't afford them, I can't even afford to replace the ships that I loose.
Does somebody else have have this problem ?

Take and hold and upgrade the forge worlds. Aggripina is key for me in my hard game as has lots of resource worlds in one easy to defend system. Hive worlds and industrialised worlds give resources too. To the bottom left of Aggripina and 'attached' is another forge world which can take a battle station as well for defence. Can just shuttle your defensive fleet between the two when warned of attack. Those are the only systems I'm actively protecting and making around 250 a turn. Weirdly Cadia system has never been attacked despite being undefended all game.

ou get these huge Tyranid invasions everythere and have to kill these chaos champions, but I only have 5 fleets with about 4-600 points which all exept one only have cruisers. I have unlocked battleships a few turns ago but can't afford them, I can't even afford to replace the ships that I loose.
Does somebody else have have this problem ?

The problem is trying to go all out fleets too soon, if you keep building new ships to the limit, you're going to have a hard time because your income will never grow. I'm at the same point you're at, and because I use specific fleets for specific functions (Like say, smaller fleets for defending fortress systems) in the first part of the game, I'm now in a situation where even with around 15 fleets around 700 points, I'm still earning around 1200 monies per turn.

Economy is very important, and it's worth it to upgrade forge worlds and mining worlds closeby them in order to up your resource gain instead of trying to increase your fleet and thus run out of funds. It's even worth it, if that situation arises, to just give up on specific systems being attacked by enemies, if those systems don't give you a resource or tactical benefit, just so you don't have to over commit.

I am at turn 35 normal difficulty and have over 500 income. Early the fights were hard, as I barely spent anything on ships. Mining worlds increase the income of ALL your systems that are connected. As for systems to conquer, i made a beeline for forge worlds, followed by hive and mining worlds, i would not do objectives until it was past urgency level 1 to grab as much territory as possible, as a result I am only on the mission Eradicate the Plague. I have so far avoided taking Arilla Bay, as i do not want to be causing invasions.

side note, does anyone else find it weird that Agripinaa gives reinforced armor research rather than Agripinaa Patter shield?

Wait, what? I am at the same point, with 20,000 resources on the shelf and 1200 points per turn...oO And I have the maximum number of fleets. You certainly did something wrong long, long ago in the very first turns.

My economic tactic is: Focus on the second Forge World in Cadia right the start. After liberating Demios Binary, you go straight for Xersia, as it will also give you resources. After this, go for Cadia itself, then to the left, the Agri World system, and then up to Kantrael. With these world you have a lot of shipyard capacity and resources. Though the shipyards are more for quick repairs. Now reinforce your existing fleets a little and capture the whole Cadian Sector before triggering the story battle in the Cadia System. Please note that you get a fresh fleet for free if you manage to save the ships of your ally in this mission, so no need to build one. All the while prioritize building up your Forge and Hive Worlds instead of building ships.

Next sector to unlock is Nemesis Tessera. Largely worthless but also pretty save thanks to the Obsidian Depths which locks down the whole sector save for Aeldari and apparently Tyranids. The system in the north is a Hive World, get it. Liberate the whole sector, upgrade all planets at least a bit and especially Obsidian Depths and the Hive World. You should have something like 50-100 resources per turn now and 4-6 fleets.

Now Agrippinaa unlocks. Liberate the border system and probably the next one, and wait for the Chaos fleets attacking out of the Agrippinaa system. As soon as they did this, invade yourself. This system is a major resource power house. Liberate the sector before going for the story mission and don't forget to upgrade the multiple Hive, Civilized, Industrialized and Forge Worlds as also the Mining Worlds.

This is my usual early campaign walkthrough for the Imperium. At this point you should have enough fleets to fight your way through any obstacle and make enough resources to build up multiple planets per turn. Also build up Agri Worlds if nothing else is available, as the discount stacks up ever further and comes in rather handy later on.

Just saying though, I only lost once in my whole campaign play until now, and I only lost some 6 ships of the line so far, though probably a dozen or more escorts.^^

Thanks for your advice, seems like I did everything wrong with my economy. I am holding Cadia and Agripina since the beginning and parts of Belis Corona, but I forgot to upgrade the worlds regulary while rushing ship building and campain missions to not let the panic bar (urgency gauge) get to high/higher than one. I only did a few random upgrades here and there so that many worlds still are on level one and a few on two. And does connected systems mean only the directly connected systems or the whole sector?
Looks like I can start a new game now because I can't hold my territory with only these few shrinking fleets and have no money for any system upgrades or ships.

@madtoffel You can reset the panic bar with battle plans same with invasions. So don't forget to upgrade your listening outpost in the gas cloud at the Exeltra Minor system, Cadian Sector. VERY important. Also get any battle plans from enemy ships during battles. Connected systems means exactly that: They have to be connected via warp lanes and systems under your control.

Upgrading planets gives you massive resource boosts, for example a Forge World gives you 20 on 1, 40 on 2 and 80(!) on 3. So it earns back the upgrade costs in just two turns for the last upgrade, with upgraded Agri Worlds even quicker. I had every single planet save for some Agri Worlds and minor stuff in the Cadia System upgraded before I even left the sector...though I already played the campaign during Campaign Closed Beta, and there all the Hive Worlds did not work, so Forge World upgrading was extremely vital.
xD 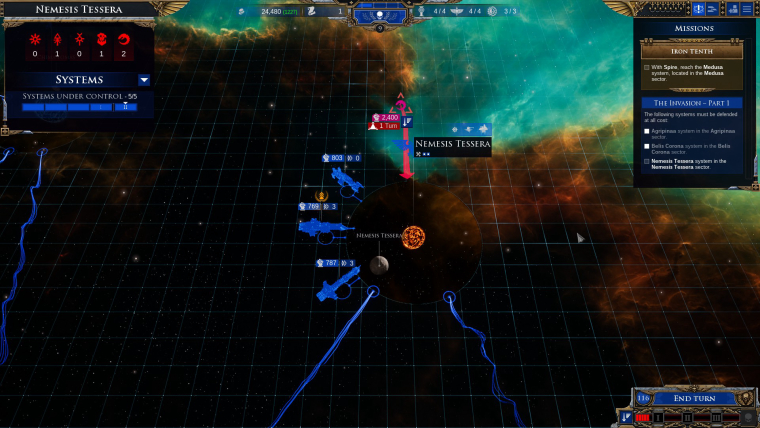 Just so you see how it looks in my campaign.

I just started a new game and had everything on max level with +200 before the campain mission (+150 after because of the useless light cruiser fleet you get there). It also seems like a good idea to just waste a few turns if you can to get the extra money and doing the last upgrades, which is something I have never done before. Thank you all for your tips.
The Emperor protects!

And letting the urgency meter go up at first isn't that big of an issue, early on in the campaign, it just means you're getting enemy fleets at you that you can oftentime easily handle, giving you some nice experience!