campaign movement can go trough enemy occupied territory
This topic has been deleted. Only users with topic management privileges can see it. 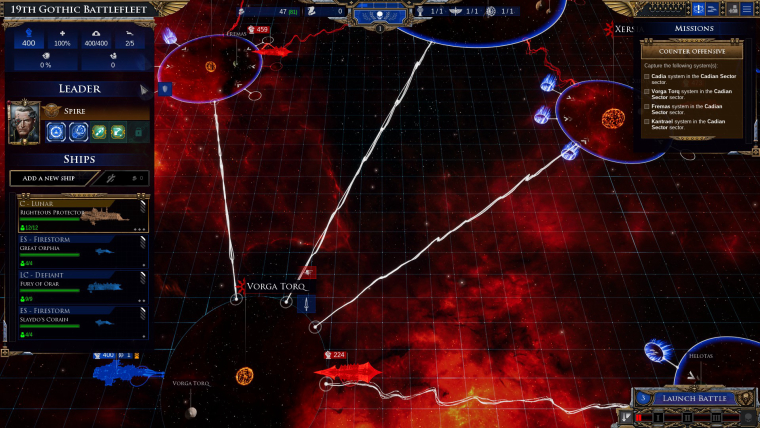 That's intended. In fact, the campaign tooltips tell you that.

It also makes sense in the lore, because you aren't traveling through real space. you enter the warp, you navigate to your destination, then you leave the warp. Which means you don't have to pass "Through" cadia at all.

I am no expert on lore, but I think that in 40k, ships can leave and enter the warp okay, but demons need a special hole to do it easily, and the eye of terror is one such hole. So the "Gate" part of cadia is in reference to the evil gribblies, not so much man made ships.

Also, of course, by holding cadia, they are limiting your incursion to 2 additional hops behind cadia. So chaos couldn't get right from cadia to terra. They would have to eventually land in some imperial held system under this game's rules.

@timmietimmins
Cadia guarded the only known navigable route to and from the massive Warp rift known as the Eye of Terror, a passage called the Cadian Gate. The world's dangerous proximity to the Eye of Terror made it necessary for the people of Cadia to heavily fortify the planet. Cadia was always the first target of the Warmaster of Chaos Abaddon the Despoiler's Black Crusades. These were the massive assaults the Forces of Chaos launched every few Terran centuries from the Eye of Terror in an attempt to break out of the Cadia Gate and invade the Imperium proper as they did during the Horus Hersey.