All players who have pre-ordered will now automatically receive access to this beta lasting until the official release of the game (January, 24th).

This Pre-Order Beta will feature the skirmish mode in multiplayer and against AI, as well as the basics of Battlefleet Gothic: Armada 2’s epic battles with the campaign prologue and a taste of the Imperium and the Necron campaigns.

Please keep in mind that this is an actual Beta and we'd love to hear your feedback about the game. Don't expect an entirely polished experience as we're still working on ironing out technical issues and balancing.

You can post your feedback about the game in the Steam Discussion or here, in the official forum.

It's your first time playing the Battlefleet Gothic: Armada, and you're feeling a little overwhelmed? That's understandable, there's a lot for you to take in when you first launch the game.

We've written a handy little guide to help new players get to grips with what to do when they first launch the game, and introduce the basic key mechanics, as well as showing you the easier factions to play.

[Solo - Prologue & Campaigns]
Firstly, you'll need to learn how to play the game. To do this, follow the steps below: 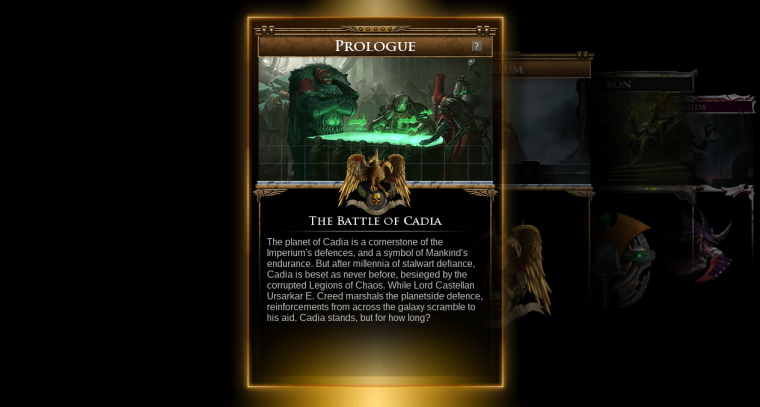 This launches a short series of missions set during the Fall of Cadia. Here, you'll learn how to move, select units, how stealth works and how to bring war upon your enemies.

Please note that you are unable to save during the prologue.

Once the prologue is completed, you'll be ready for campaigns!
You can now launch the Imperium tutorial to unlock both campaigns.
Please note that all the tutorial informations are displayed in the game help when pressing escape in the campaign.

In this Pre-Order Beta, skirmishes are available vs AI players, as well as against other human players in 1v1 and 2v2 modes.

[Battle mode - Multiplayer or vs AI]
To start setting up a skirmish or a multiplayer battle, you will need to select Battle on the main menu. From here, you'll be able to play any of the twelve factions featured in Battlefleet Gothic: Armada 2.

For players new to the game, we recommend playing one of the less micro-intensive factions, such as The Imperial Navy, Chaos, Necrons or T'au.

To complete the faction selection, you have access to sub-factions.
In most cases it only changes the fleet color. A few sub-factions also grant you access to new skills (see below).

Once you've selected your faction and sub-faction, you'll need to also select two skills and upgrades. The locked skills you see here unlock when you play multiplayer matchmaking and gain experience.

Then, select your fleet. For new players, we recommend using one of the premade fleets, to get a feeling for how that faction plays.
You will also be able to create your own custom fleet. But let's do this later, when you are more at ease with the game.

You also have opportunities to tweak the match to your liking before starting.
To open the Skirmish map settings, click on the wheel button on the bottom-left corner of the screen.

Battle difficulty and enemy faction selection
When playing against an opposing AI, you are able to choose which faction to play against.
To do so, click on the Launch button (the big one, you can't miss it). A pop-up will allow you to choose the enemy faction as well as its difficulty.
Indeed, you can reduce (or increase) the difficulty of your opponent by changing the fleet points they have available.

"I have some friends on steam playing the Beta too, can I play with them?"
Yes, of course! To do this, you'll need to invite them to your battle. From the Battle menu, simply click "Invite Player" on the right side of the screen. After inviting them, you can play against them, or with them in a 2vAI mode. In 2VAI, each player will have 600 fleet points available to them.

Thank you, and good luck out there!
Focus Home Interactive and Tindalos Interactive