What are the devs doing about these hackers?
This topic has been deleted. Only users with topic management privileges can see it.
O
O
O-Face Reply Quote

I'm honestly seeing various hackers in the game, lots of recordings, too busy with work to spend a day editing and posting right now, but I know you guys deny all existence of cheating in PC games without video evidence (lol) so here is something I saw, clearly these guys are running rampant:

This is why I restrict myself from 3/4 of the game and only play COOP, this, and the filthy snipers 200m of objectives who spend whole game sniping you every single time you try to go in a doorway or window. It sucks but I'm fed with PVP for now, too much years spent playing with these rampant issues (OK snipers are more OK than cheaters :D).

What are the devs doing about these hackers?

EAC is banning them in waves.

If you spot an actual cheater in the game, feel free to report this individual directly to EAC via this form:
https://www.easy.ac/support/sandstorm/contact/report/

I have been reporting people to EAC via the report link, thanks for letting us know.

That being said, Honestly man, your game is RIDDLED with hackers. I have a couple copies of the game and I'm not playing on O-Face right now specifically because it's a joke at the moment, and I don't want my main account's stats all fucked up because of a bunch of fat losers using paid cheats.

It's REALLY out of control. I am seeing, recording/verifying and reporting at least 2 cheaters every match. They are easy to spot but people are worried about calling them out and looking like they are noobs...but it's rampant...it's obvious and it's a joke.

If I were you guys I would add an additional layer of protection, I duno if it would mean admins overwatching each game like CS, but SOMETHING else....the hackers are pissing all over the Easy Anti Cheat.

On eGO servers, I haven't seen one hacker but I'm keeping my eyes wide open, thanks for the heads up O-Face.

225 hours on the game, never saw a guy that I would for sure call cheater.
For sure it's a problem in every multiplayer game andthere may be some but I never encounter them so @O-Face I think you're a bit too overwhelmed with the idea that there is cheaters everywhere my dude, just enjoy the game and get better.
Good thing that you report them when you see one tho.

Oh god one of those "my dude," guys that claims he hasn't seen a cheater. I'm always curious what these guys' stats are...and if they are completely oblivious or just trolling.

Look at my thread “security issues” and the post with title “cold facts” if you are interested in estimating or seeing estimates of amount of hackers in different games. Devs do what they can in all games, as it make games less popular when playing against cheaters, truth is there is no perfect solution existing, and will not for a long time in any game of this sort, mostly because a lot of data is stored on the users computer and can therefore be manipulated.
If 5g internet (more than 1GB/s) is a widespread thing in 10 years the whole game (any game) could be streamed and only take keyboard/mouse input from users (removing most hacks); until then it’s impossible to solve completely for any devs.

Amount of losers/cheaters in Sandstorm is probably somewhere above 3% as that seems to be the approximate amount of cheaters in this type of game, and look my other post to learn how to use this info if unfamiliar.

@o-face I haven't noticed a cheater so here are my stats. Over 365 hours in the game. I play East, West, and Europe sometimes. 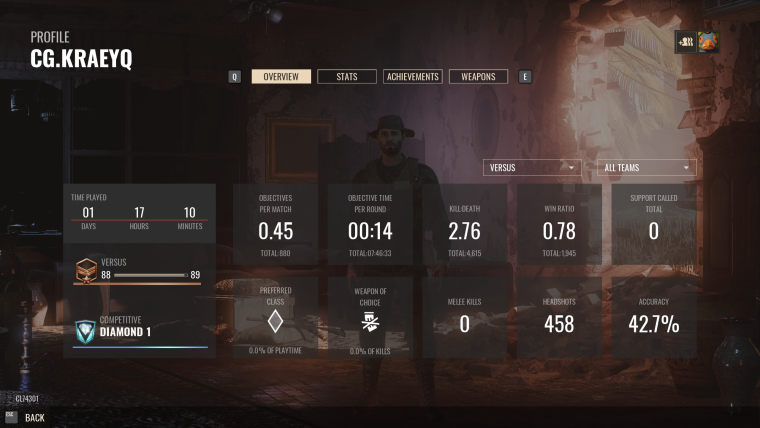 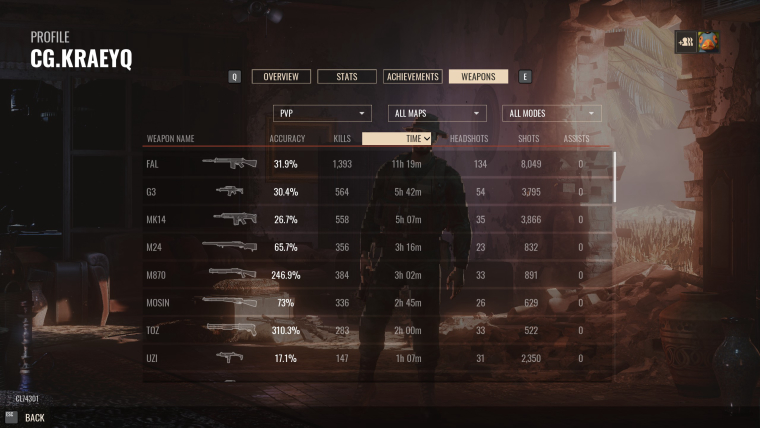 I think it is completely rational to play many games without noticing cheaters, simply because there is almost impossible to be certain of less obvious cheats by gameplay alone, and it is not possible to detect several cheaters every game at a high certainty level. Not noticing cheaters or throwing hackusations will of course not mean that they do not exist. Several famous you tubers have been proven to cheat without it being legal to write about it in this forum as stated in forum rules. One of the largest games in the genre pubg have been proven to contain above 3% cheaters by the developers together with eac themselves, so it is natural to extrapolate that similar numbers will be present in similar games.

I think the best approach is to only accuse someone directly by the official report channel so that eac can analyze that player in the way they see fit, and that we as players in most cases can have a suspicion at best in most cases.

Games like these are fun to enjoy and a lot of matches can be won fairly by skill alone.

When playing against a team that use a private comm channel, it may often feel like being cheats present for some players without that being the case, as an organized team with skill will dominate unorganized teams by using cooperation strategies not possible to pull off solo. So play to have fun and don’t worry too much about rankings. As it is impossible to have the highest rankings in the long run in any fps anyway in today’s pvp scene in any game from home computers.

Riddling forums with hackusations is in disfavor for all pvp enthusiasts, because there exist no gaming company in the world who got this problem all figured out, and either NWI or any other developer is more at fault than any other company as they use the same anti cheat companies to mitigate the problem. Anyway eac and battleye is better solutions than vac, which is obvious if you learn how those 3 different systems function, so we got the best protection we can currently have, though it will be in all our interest to provide feedback that leads to better protection.

in the competitive mode, very often there are players who, with 100% certainty, know where you are at a certain moment, if you are hiding in an ambush. The score is usually 15-0 at the end of the match.

I agree that is a strong indication of wallhacks or esp (extra sensory perception). I personally prefer large pvp gamemodes 32 players+ with 16 players + on each team, because if there is a cheater on one team, many times players on the cheaters team will call it out themselves and kick the cheater. Also if you have a high suspicion you can go in spectating mode and watch the suspicious player for a while without your team having trouble as they are still at least 15 more players - I have seen several players leave a match when I started spectating them in other games.