Lets bring back - Survival gamemode.
This topic has been deleted. Only users with topic management privileges can see it.

Hey forum users,
Let me know your thoughts on if you'd like the Survival gamemode to be added into SandStorm or would you prefer another gamemode all-together?

Survival mode:
Players need to sweep and clear the area from safezone to safezone with their team to collect more re-supply points in an endless battle to survival waves on enemies. Under the cover of darkness they must equip the right gear for the job from nightvision to torches/flashlights to aid in the in fight.

Hope this inspires someone!

[below is a quick edit of what the survive tab might look like ingame, ideally i would like the image to have a full moon-lit sky, but i dont have all day to edit :} ] 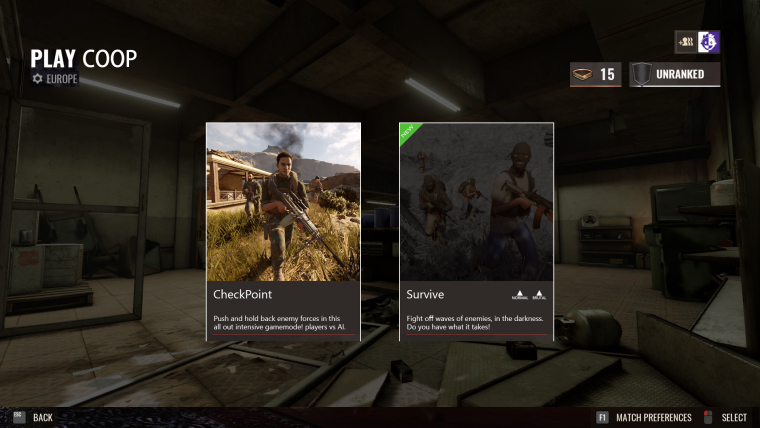 Have a great day.
From MrDaruth.

No really tho, that was like my favorite gamemode in Insurgency. I would love if they added it in.

Survival but with a day and night cycle and you have to scavenge weapons off of dead enemies.

Make the areas you run to and spawn in extremely advantageous every so often, maybe having loose grenades or rockets here and there, or maybe a .50 mounted facing one of the roads.

HQ will tell you which safe house has not only been resupplied, but also reinforced, and a capture zone and resupply box will be present in that safe house. If the majority of the surviving team runs there and chooses it as their spawn, your teammates can respawn there every 45 seconds for 5 minutes, until the zone is contested & captured by enemies, or until another safe house is taken.

Hostiles will immediately default to trying to overrun that specific safe house Checkpoint Defense style, rather than searching the map or camping safe houses. This sort of "Holdout" can be used as a diversion so that other friendlies can sneak to the next safehouse, or it can be treated as a sort of "insurance" in case fire support is being called by the enemy, or you suspect a fair amount of your team is going to die again.

After the 5 minutes are up, HQ will inform everyone that "Nobody's left at X Objective, Move out!", or "They're sending something big, MOVE!". At 6 minutes, enemy fire support will target that objective. Typically chem gas and explosive drones on INS, and an A-10 or new fire support option, the TLAM-E on security, and that'll knock out and destroy any turrets or sandbags that were generated for that objective. Contrary to regular fire support, in this game mode, you CANNOT survive it if you are in the radius (Read as on the OBJ).

(General Traits of TLAM / Tomahawk: The Tomahawk takes about 30-45 seconds to hit point of impact from confirmation, and makes a very audible noise, similar to the rocket barrage. A commander has about 2 to work with, and is essentially treated like a single artillery shell with a much larger blast radius, and specifically an EXTREMELY HIGH wall penetration value. Surviving the TLAM requires moving down to lower floors or away from the front of buildings. It's designed as a bunker buster to get enemies off OBJ, similar to the IED drone, but while the IED drone can go inside,this can't.)

I figure this might add a little more depth to gameplay without making it a non-stop camp fest, or "just" running like a chicken with your head cut off.

I wasn't a big fan of the mode in Ins2, mostly because I don't like game modes with no way to win other than to get bored. The concept is cool, but it would be better if there were some kind of final objective that would end the game. Especially with maps as large as they are now, making the team cross the map to an extraction point could be really tense and fun.

yes .. but I dont like endless waves . Id prefer to have some winnig ending ...

So here is my EXTRACTION game mode based on Survival:

That could lead to intense more diverse situations. Team could move slower together or if somebody will run too fast to extraction alone he wont be able to defend it easily and if he dies that place will be full of enemies that rest of the team needs to fight to get extracted (while still being hunted) ..

Or to add more events there could be few AA nests (pickup truck with AA HMG and sandbagged AA possition) randomly around map (on ground and roofs) that you need to find first. If you dont do it first extracting heli will be shoot .. that wil give you location of those AA nests (sound and visual cue ... tracers .. specialy in night) and than you go after those and new heli will be sent. If you let the heli to be shot down you need to go to crash site and destroy the wreck of heli (incendiery, C4 or by activating it like weapon crate) before you can extract.

That wil prolong the game and force players to move on map more actively, not just speed running through the safezones ..

What was one of the key aspects you liked the most?
(examples: night time, endless waves, surviving on low resource).

Oooooo i like the sounds of that @kraeyq !!
and it's more 'plausible' now with Unreal-Engine-4.

Surviving through the night as it breaks-into Dawn.

Great suggestions, i'm sure the devs will appreciate.
Really like how you focused on more variety within the mode itself, to potentially improve it for SandStorm.

Gives me an awesome co-op 'singleplayer' feeling, nice one!

I like the addition of an extraction point to finish off the round, maybe best of 30 rounds or 50 would suit your vision also.

[rounds need to be high enough to make them a 'worth' while survival mode while also being hard to win, thus bringing back players to try again, is why i stated a higher round cap like 50].

Thanks for your suggestions, lets see if they inspire the devs in some form.

Adds a spin on the gamemode overall that seems fun and exciting in my opinion.
In-regards to choice between heli's flying in or just clearing the wave, its gotta be heli's, that would be so awesome to see and would make the potential ending great! in every aspect, gameplay, player emotion, videos, marketing for the mode etc.

Really nice suggestions! The devs look through these official forums so i'm sure it'll be a great read for them.

Isn't that basically Checkpoint, the coop gamemode we already have? ^^

@grabbinpeels1 well the safe zones are basicaly the same as in Survival mod and you start with Pistol only getting points as you go. But yep in essence it is mix of Survival, Checkpoint and Outpost mods with some randomization and multiple ways it can goes and end .. I just need Survival to have end game ..

Checkpoint structure is linear one point capture that is always the same. Here you would have mutliple safezones at the same time, randomly postitioned radiostation on one of them, randomly located AA guns you have to active search for.

Team can split up, part is searching for AAs, rest is getting through safe zones to meet up on extraction point. Also there is no point in just speed running it since you cant do anything as single player (except destroying AAs).

Isn't that basically Checkpoint, the coop gamemode we already have? ^^

My suggestion: make "safe zones" optional. Place a number of them spread out on the map, and make capturing them the only way to respawn dead players. All safe zones are usable at any time, and the players have the option of which, if any, to capture on their way to the extraction site.

I like the idea of an extraction helo or truck sitting and waiting at the extraction zone. Players who make it need to defend it until all other players either make it or die. A bit like the final extractions in the Left4Dead series.

@maa_bunny people wont bother to capture half the time .. specialy if only 2-3 guys are dead .. safezones are there to revive players, get points and spend them on gear, activate another wave of enemies ..