Console Mods
This topic has been deleted. Only users with topic management privileges can see it.
B
B
BakWo0dsGori11a Reply Quote

I dont think we are quit understanding the importance of the mods here. This game has been released on the console for OVER a year now. Still no hope in sight. I saw something talking about fixing working mirrors and what nots..people are not going to ever see those mirrors because they quit playing the game because its losing its touch. I dont see how its hard for anyone to realize how BIG this game would BLOW UP if it had the mods the pc has. I live in south Alabama..im telling you, your sitting on a goldmine here. This is an awesome awesome game...we really need to see some mods fellas.. SOON! Idk if you watch these youtube videos of your game and these pc mods, but go look at a fee of em and youll see what i mean. This should be a 100% main priority to take this game to the next level..we are talking forza big... Mx vs atv big..this could go viral...right now 9 out of 10 people have never even heard of this game. I have been playing a playstation my whole life ive had every one of em. I had never heard of until i stumbled across it on youtube...this game could be huge..your prioritys are in the wrong place.

@bakwo0dsgori11a Maybe do a little research first, because its not like, poof all pc mods are on console. There is a LOT more work involved than you could ever dream of, its easier for them to create a new game and get it all linked up before the release than rebuild the whole system and engine they already have and even that will take more time than you could think of. And also, how much people you think they have employed? You compared it to forza, but keep in mind that their team is probably way bigger.

they still advertise mods on their website for consoles to this day... if you lacked the team, skills or time to implement something you advertise then would it be wise to advertise plans to do so? it's not like the devs didn't dig this hole for themselves, plenty of people would have bought the game without a mention of mods.
But that's not what happened is it. 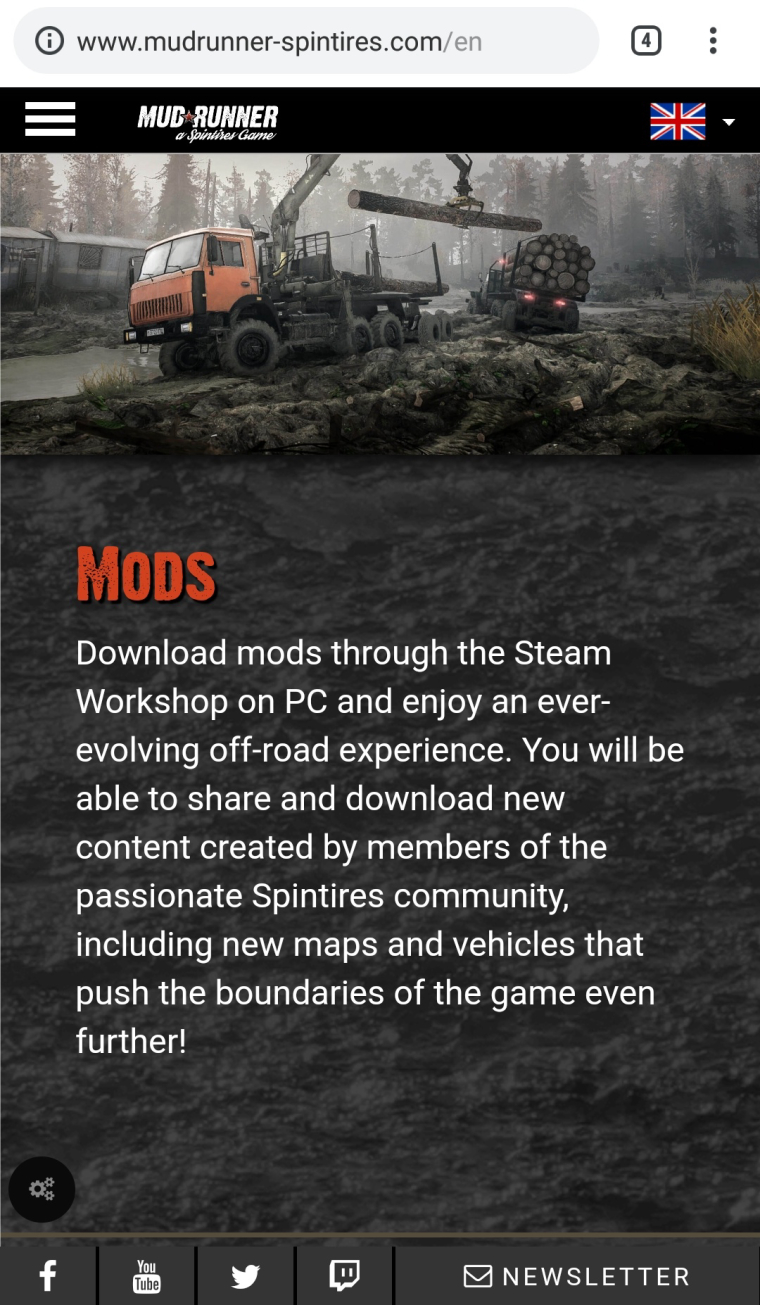 Sorry, maybe I'm overlooking something but I don't see it on their site^^

It's called false advertising , if you are out of the Usa you can do it as much as you want, oovee said this game was going to be like beamng.drive and it never got to that point (the official contents) some mod makers including myself took the challenge to make stuff move and act like irl
Focus promised taking the best mods out there and port them to console in a dlc and you got it in the name of American (drifting and stuck in mud, coded to suck) wilds , maybe they changed some stuff because everything is op in the workshop and made for trails and rocks and not logs and mud

P.d
People don't reply to this type of topics, just let them sink a force them to read the official regarding console mods topic, of they come to your topic asking you to do console mods then you report them as spam and keep your topic on track

You don't need to post a thing to support your argument as I'm not debating wether or not they advertised mods, I already know the answer.
Im just simply stating that I will not be investing my money into anything by these developers in the future if they do not resolve the issue in some way.

@countonvine why not post the disagree in the "Regarding mod console...." topic??

I find it interesting FS19 to my understanding created by Focus, is pumping out tons of player created mods and all sorts of stuff. Its pretty awesome. Can't comprehend why they wont do it for Mudrunner or if its even the same team... The American Wilds DLC was a sweet little teaser but I think I speak for a lot of us whe I say we want more on console . . . . . . . . its painful

People, get your facts before questioning about the devs.

Why not closing all topics regarding Mods on consoles for Mudrunner - THIS WILL NOT HAPPEN!

Before Mudrunner was released on their FAQ's they did say they would look into mods on console and they would try. I even got an email from their support saying they would look into it but it wouldn't drop when the game drops. I was told 6 months or more. Then shortly after the game dropped they said "Nope mods are not happening". I seen in 2 different times they would try and then as soon as it dropped they completely cancelled the idea.
I have a gaming PC so I play on PC but a lot of my friends want to play and only have consoles. I told all of my friends wait for mods or don't buy it because I bought it on my console as well hoping they would do mods on consoles and then they pulled the rug out and said no.
I played it on my console for probably 2 hours and it got stupid boring and I uninstalled it.
I also have the PC version as well and make stuff for it like I did Spintires but I won't be buying a Mudrunner 2 unless it's a 64 bit version and a few other minor adjustments.

well what if they were looking into it and it wasn't possible, what now?
i mean sure, you could put accusations of them wanting to sell more copies to console players in anticipation without even having really looked into it, but people always are like "YOU PROMISED THERE WERE GONNA BE CONSOLE MODS, YOU LIED, FALSE ADVERTISEMENT, GO TO JAIL REEEE!" when all they said was "we will try"

well they didn't try hard enough. back to pc for me i guess wasted my money