Free Open Beta Weekend LIVE!
This topic has been deleted. Only users with topic management privileges can see it.

Starting today and running through the weekend, an open beta period will invite everyone to try the game for free on Steam. This includes every map, weapon, coop & PvP game mode and all other content found in the final game.

Competitive matchmaking will be available on full release. The game is now playable totally for free to everyone on PC for this limited period between 8am PST today through 9am PST Monday. We look forward to your feedback and we hope you enjoy the beta this weekend!

Insurgency: Sandstorm is a game of team-based tactics and objective-oriented gameplay in a fictional, contemporary Middle Eastern conflict, complete with player versus player, competitive matchmaking and co-operative game modes versus AI. Your soldier’s appearance, weapons, attachments, armor, and equipment are all up to you. Call in airstrikes, use vehicles with mounted weapons, and equip a wide range of specialist weaponry from grenades to drones to C4 explosives.

Prepare for a hardcore depiction of combat with deadly ballistics, light attack vehicles, destructive artillery, and unprecedented audio design putting the fear back into the genre. Death comes fast, ammunition must be carefully managed, and the environment must be tactically navigated at every step toward victory.

We also invite you to read the latest blog by NWI CEO, Jeremy Blum where he discusses the future of Insurgency: Sandstorm and what you can look forward to as we continue to update the game!

Those who pre-order Insurgency: Sandstorm receive a 10% discount as well as an exclusive in-game tattoo cosmetic to show their veterancy in the years to come. An additional 10% loyalty discount will be given to fans that own the original Insurgency. This additional discount will be offered until the end of March 2019.

what to do if you have green screen in game? 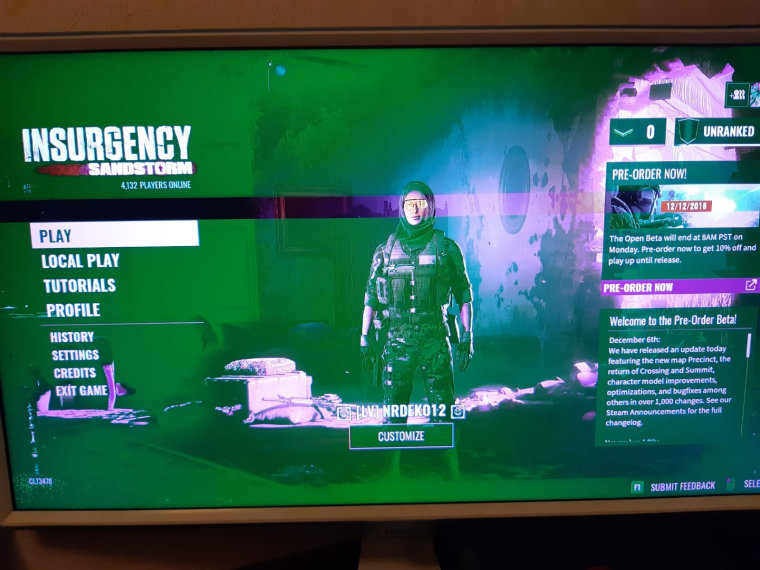 CAN SOME ONE HELP ME?