Pre-Order Beta 1 - Welcome And How To Start
This topic has been deleted. Only users with topic management privileges can see it.

We’re really happy that you’ve chosen to join us for the Pre-Order Beta stages of Battlefleet Gothic: Armada 2! This first beta introduces two modes from BFGA2: Prologue and the Battle mode.

In Prologue, you will be able to learn how to play the game, as well as discover the story setup for the game.

In Battle, you’ll be able to play one of three modes: Skirmish, which allows you to play any of the twelve races in the game against AI players. Here, you can play against fleet sizes of a default of 1200 points, but are able to modify them to make it easier or harder by size of the fleet they can deploy.

You’ll also find Multiplayer here, where you can play against other players in 1v1 or 2v2 battles, with fleets of up to 1200 points. In 2v2, this will be 600 points for each player.

While playing these modes, please keep in mind that this is still a beta, and that we are still actively collecting feedback on the way that the game plays. If you have any issues with faction balance, bugs or performance, please ensure that you let us know on the official Focus Forums.

Otherwise, please read the post below to learn some important information about how the game plays. 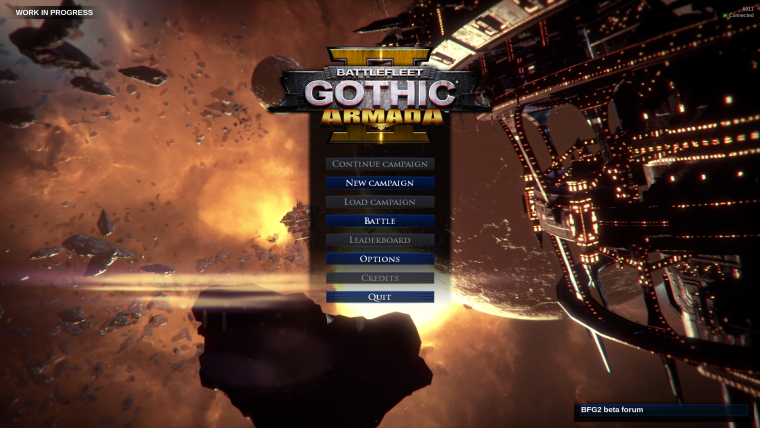 To access to this mode, clic on the "Battle" button of the main menu.
Once you have selected it, you will have to pick the Faction and Admiral Profile you want to play with.

Here’s a screenshot of the menu: 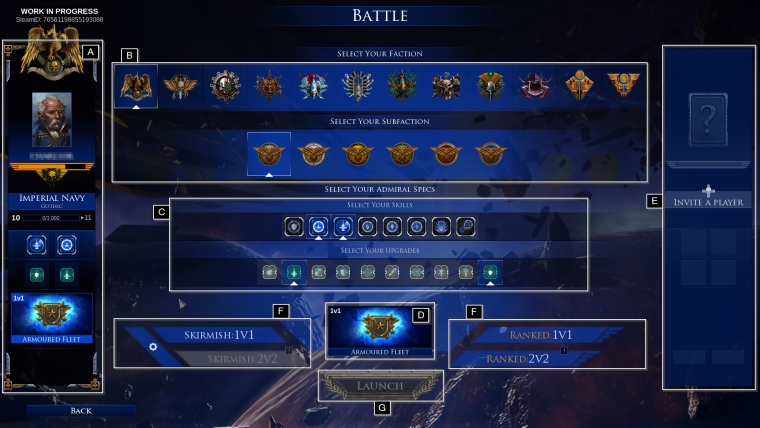 C - Select your Skills and Upgrades

While selecting your fleet, you can create your own custom fleet with the ships you prefer.

The first line ship you choose will be your admiral ship.
The number of escort ships authorized in your fleet is based on the number of line ships you have in your fleet and on their tonnage.
Stats and attributes of the selected ship are displayed at the bottom of the screen.
You are limited to a maximum of fleet points, depending on the game mode you want to play in: 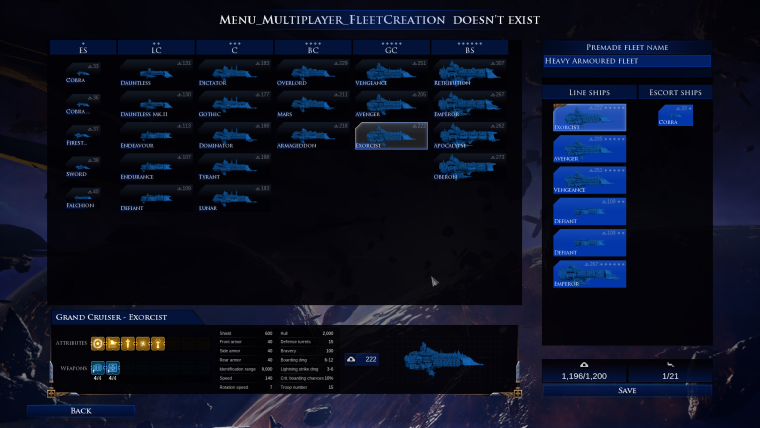 Your ships and your opponent’s will be deployed by default.
To change the deployment place of a ship, select a ship by left-clicking on it or on its ship card in the right panel and right-click on the position where you want it to be.
Hold and drag the right-click to rotate your ship.

Click on “Ready” once you’re happy with the deployment position of all your ships. Both players must be ready for the battle to start.

Reminder: if you want to quickly re-deploy your ships through keybinding, you quick-skip ships in the ship cards list by pressing Shift. 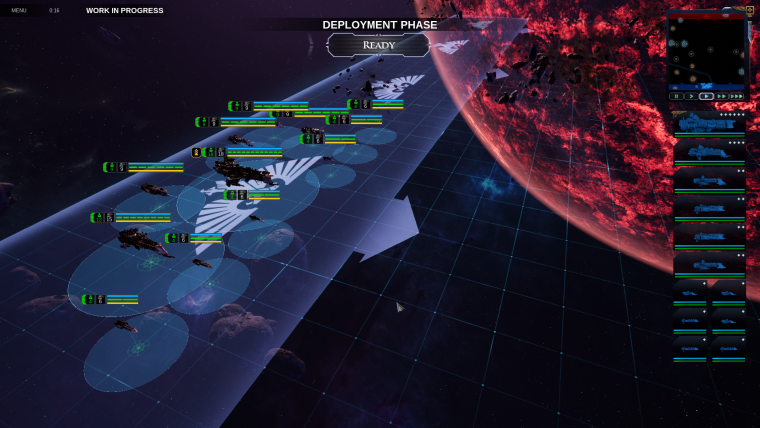 Here’s a screenshot of the in-game interface of Battlefleet Gothic II: 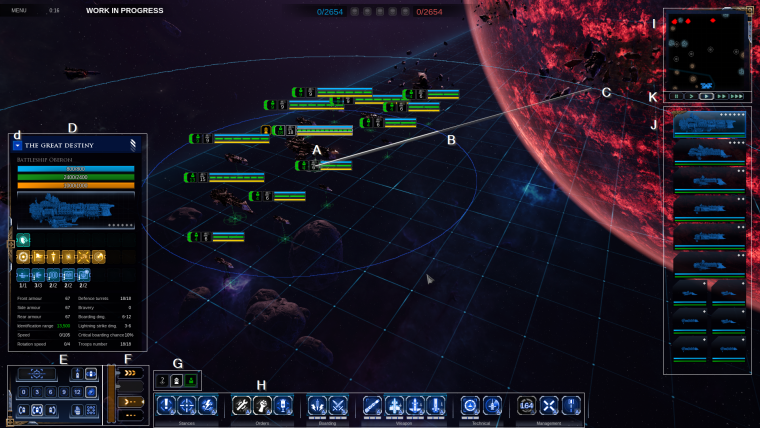 Also applies for the main ship of a multi-selection

Note: You can reduce this panel using the “v” button ( d )

Note: when selecting an enemy ship, you can set a level of priority and target specific parts of this ship.

Maneuvers are different depending on the selected faction

A selection of multiple ships will display the available skills for the whole selection.

J - Shipcards of your whole fleet

You can select a ship from this panel. The currently selected ship or main ship of a multi-selection is highlighted and framed in white

Only available in solo games against the AI

This section is aimed at the player returning from BFG1 and want more info on some new features in Battlefleet Gothic: Armada II. 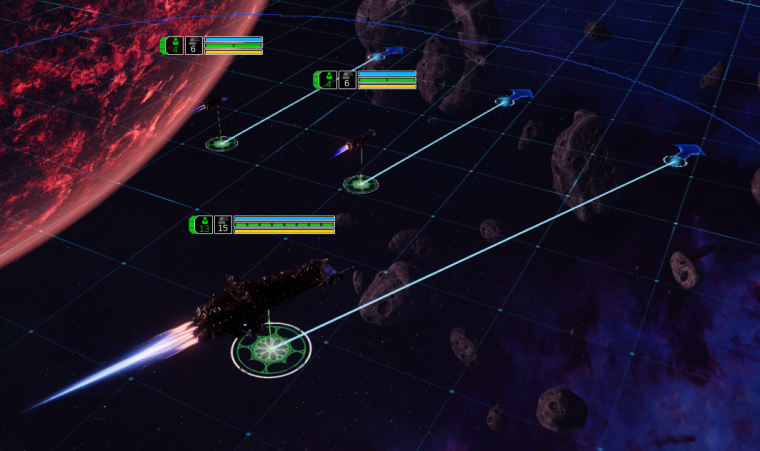 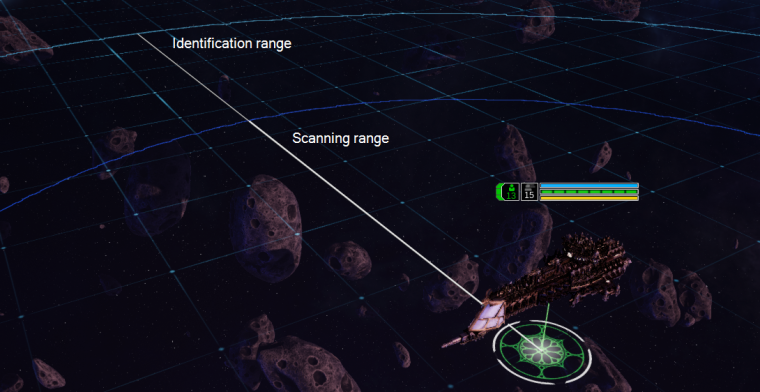 If you are playing against an AI, there are different speeds that you can set.
You can change the speed with the buttons at the bottom of the minimap. The speed varies from slomo, to a full pause, to accelerated speed. Pressing Spacebar still triggers the Tactical Cogitator.

Please note that these speed options are not available in any multiplayer mode (PVP or coop against AI).

In BFGII, you will be able to use all the skills of your current multi selection.
When you click on a skill while selecting multiple ships, it launches it on all the ships that can do it.

In case of Weaponry, that means, for example, that you can launch all your torpedoes at once.
For targeting skills such as boarding, you’ll have to select a target for each skill launched (imagine they are stacked in your mouse cursor).
You can hover a skill to see the simultaneous range and/or direction of each ship as below: 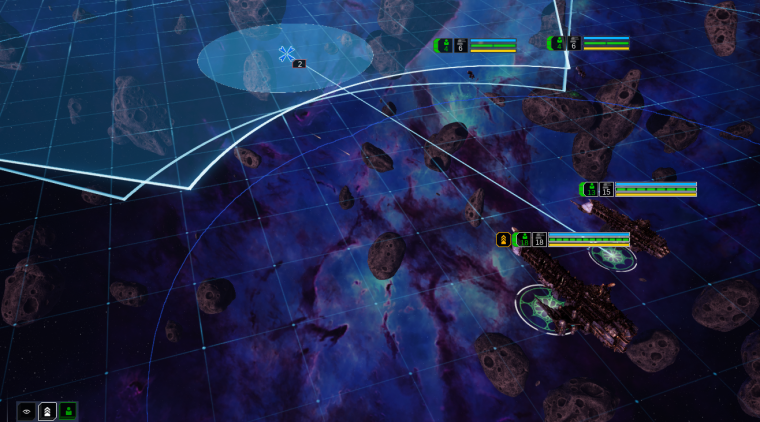 IMPORTANT: Skill auto-launch is no longer available, the players will have to be careful about correctly using its skills.

The weaponry and boarding skills are now limited to a maximum amount of charges, in order to prevent infinite cannon nova and torpedo spam while not moving in the map. Each weaponry skill has x3 charges.

Each charge of the same weaponry is independent, torpedoes and melta-torpedoes have 3 charges each. A ship with both types of torpedoes can use them up to 6 times (3 times each) before running out of charges. You do not replenish charges inside a battle, but the charges are recovered between each fight. Please note that the cooldown for the same skill are linked however.

Ordnance have been improved quite heavily. Each ordnance is also limited by a stack, with each different ordnance having its own stack. Ordnance is no longer limited in range.

Fighters are now a target skill. Player may target a friendly ship, an enemy ship or a location in space. The fighters will go to the destination, and intercept all ordnance and torpedoes coming their way. The fighters can also be used to scout, as they have a detection radius. At last, fighters can destroy defence turrets that protect line ships.

Assault boat and Bombers can be launched without restriction of range but can only target enemy ships. Assault boats trigger boarding actions, while Bombers deal hull damage.

One last thing, if your ordnance finish its mission and comes back to its line ship, you regain the used charge. If you lose it, the charge will be consumed the same way as a torpedo or boarding skill.

Special orders “Lock on Target”, “Brace for Impact”, “Running Silent” and “Reloading” are now stances that retain their gameplay effect till the player changes it.

The “Running Silent” stance is cancelled when the ship is detected, therefore it is cancelled when using Maneuvers. Resetting your ship to Cruising Speed or stopping it will reinitialize the stealth mode when possible.

The available stances are different based on the faction and ship’s tonnage – for example, a battleship cannot do a “Running Silent”.

New emergency orders have been added to help you in dire situations such as “Call to Arm” or Emergency Repair”.

Please note that orders effects might have been modified and you should carefully read the orders and skills description (e.g.: Emergency Repair no longer recovers a small amount of Hull Points).

Boarding actions have been heavily modified in BFG II. They no longer are instant and do not cause critical damage anymore.

Each ship has a given number of troops as seen in the ships stats:

Once a boarding is done, the troops will fight inside a ship and the results will be made after a delay.
If the attacker wins, the number of troops inside the ship goes down by 1 and the ship suffers a permanent debuff on its cooldown and weaponry reloading rate.
If the defender wins, the boarding troops assaulting a ship are destroyed.

Likeliness of winning a boarding action is based on the troop efficiency, this allows us to reflect more accurately the different factions in Warhammer (for example, Adeptus Astartes are better in combat but fewer in number).

Besides, troops number works with some steps, as you can see on the previous screen. Each step has the same exact troop number. When the current troop number drops to 0, the step switch to another one, and add a light critic to the ship.
The different steps are the following: green (1st step) ; yellow (2nd step) ; red (3rd and last step).
So when you read "18/18" on a brand new ship (green step), there are actually 18x3=54 total troops remaining before a drifting hulk.

If the troop number of a ship drops to zero on the 3rd step (the red one), the ship will no longer have any crew member left to manoeuvre it and will become a Drifting Hulk (see next screen).

If a ship has 0 troop left, it becomes a drifting hulk. A drifting hulk has its skills, weapons and movement disabled.
The player can take control back over his drifting ship with a boarding action from another of his ships, granting it 1 troop.
The player owning the drifting hulk can also scuttle his ships to make it explode. 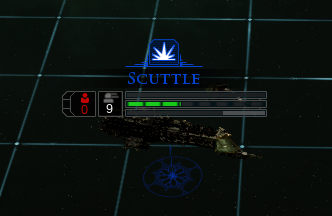 You can set your ships in a column formation.

To do so, select multiple ships and click the Group Order skill in the management tab.

Click then on the ship that will be acting as the leader. The other ships will follow its path.

Morale is no longer a hidden stat, each ship has a base morale of 1000. The morale value is modified by multiple elements such as damage taken, ships tonnage, an allied ship being destroyed, specific skills and more.
Each ship slowly regenerates its morale at the rate of 0.5 every second.
You can follow the morale value of your ship on the orange bar in the UI.

Once the morale reaches zero, a mutiny occurs. The ships tries to escape the battlefield.
The player can execute to regain control the ship but will lose half of its troop if he does so.
He can also use a rally order from his admiral ship to stop the mutiny.

The rules of the multiplayer game mode are now as follow: 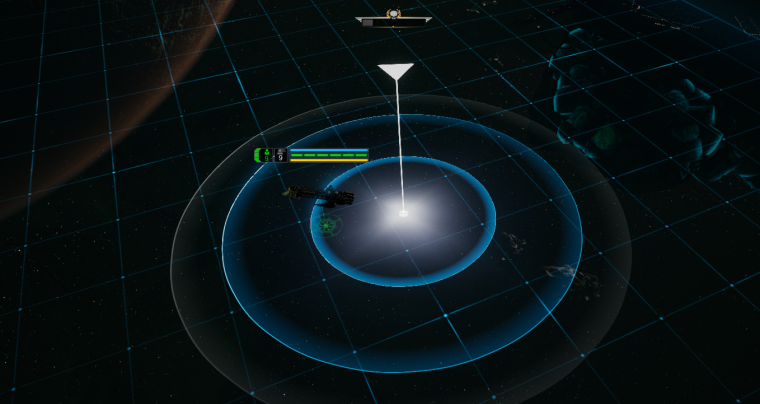 Note: UI feedback and balancing are still in progress. Do not hesitate to share your feelings on these matters.