Devblog #4 - Skirmish & Multiplayer
This topic has been deleted. Only users with topic management privileges can see it.

Greetings Admirals, and welcome back to the devblogs for Battlefleet Gothic: Armada 2. Today’s topic is multiplayer and skirmish modes, giving you a look into the non-campaign offerings you’ll have access to not only come release, but as part of the first pre-order beta starting early December.

This includes ranked play, 2v2, as well as standard versus AI, across a massive variety of possible matchups, battlefields, and environments.

The base skirmish and multiplayer game is a randomly generated map with five capture points and a number of possible environmental effects. These range from those familiar to players of Battlefleet Gothic: Armada, such as gas clouds and asteroid fields, as well as weirder phenomenon new to the sequel - a fleet of space titans migrating through the area that cause heavy damage to any ship they come into contact with, or pulsing solar radiation that render shields useless.

All of these settings can be customised before a skirmish game, letting you pick the point totals of fleets, which environmental effects will appear, whether to use the capture point Domination ruleset or the simpler Deathmatch mode, and so on. 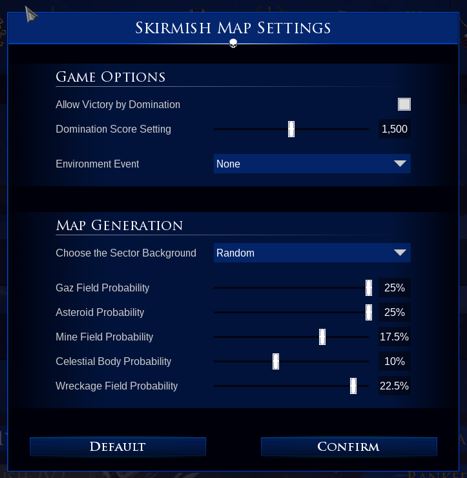 In Ranked play, fleets are set to the new maximum of 1200 points, increased from the original game for larger, more action-packed battles, and environmental effects are turned off. Capture points are on, with randomised locations to make every battle different, and internal logic to ensure battles will never be unfair, but will require dynamic tactics. The same is true for 2v2 ranked, only each player fields a fleet of 600 points of their chosen faction.

For those that want to get right into the action we have pre-defined fleets across a broad spectrum of playstyles, while more advanced players can customise their own faction fleet with any combination of ships they like.

On top of all this, a number of quality of life changes have been implemented to make multiplayer and skirmish games better than ever. Balance has been improved across the board, a process that will continue through our two pre-order beta phases. We’ve also made changes to menus and ergonomics to make it faster and easier than ever to get into a battle, and multiplayer progression is rewarding in terms of cosmetics and new options for skills and fleet upgrades.

Care was taken to ensure this never feels like a power reward for playing more, but simply new options and ways to play. This progression system is only available in ranked mode, as a way to further reward those who jump into multiplayer and experiment with different fleets and strategies.

In ranked play, every battle impacts your position on the global leaderboard, filterable by faction. Hone your skills to be the best admiral in your faction!

We believe we have a complete and exciting offering for multiplayer in Armada 2, which will delight new players and series veterans alike. We can’t wait to get it into your hands officially early next year, as well as take your feedback and make changes in the upcoming pre-order betas.

Battlefleet Gothic: Armada 2 releases on Steam in January 2019. You can already pre-order for Beta Access before the release of the game, and a 10% discount! http://bit.ly/BFG2Steam

Loving the rest of the news! my only "Gripe" would be the low 2v2 fleet score - 600pts a side is FAR too close to BFG1's 2v2 - Ideally (game engine/balance allowing) should be nearer 1000pts a side.

will there be a point decay over time for ranked, if an admiral/account is no longer active?

Are we still getting Skirmish Progression in singleplayer? Because I adored that system in the first game.

When in December? I'd love to know so I can schedule some playtime

last edited by
U
U
UncleKulikov Reply Quote

For the 2v2 Skirmish battles, can 2 players be on a team fighting against 2 AI opponents?

When in December? I'd love to know so I can schedule some playtime

Edit: and it's live! The first pre-order Beta will take place December 5 to 12 and gameplay trailer is here. Cheers!

Are we still getting Skirmish Progression in singleplayer? Because I adored that system in the first game.

The progression system is only available in ranked multiplayer.

will there be a point decay over time for ranked, if an admiral/account is no longer active?

As far as I know, there isn't any decay for now.

Not going to lie, that's a little disappointing. Unlocking new ship classes and upgrading those new ships as you spent time with the fleet was by far my favourite part of the first game. Are we at least getting something interesting to replace that? Or is it just "everything is available from the very start"?

Not going to lie, that's a little disappointing. Unlocking new ship classes and upgrading those new ships as you spent time with the fleet was by far my favourite part of the first game. Are we at least getting something interesting to replace that? Or is it just "everything is available from the very start"?

I think Custom Game has fulfilled the need for Skirmish. You can basically go into a game with everything unlocked so you can test your fleet against the AI to your heart's content.

@lkhero
Not really the same thing for me. I actively enjoyed the feeling of progression from the original system. Having everything unlocked from the start takes some of the magic away from the first time you could use a battleship-class ship in one of your fleets.

Not necessarily a complete deal breaker for me (I'll see if I like the game from the previews and by trying the beta for less than two hours), but I'm becoming less and less excited by the game the more I hear. Seems like it's doing everything it can to appease the multiplayer base, which I could not care less about. In doing so, I'm losing out on more and more things I liked from singleplayer...

@netheos To be honest this game will never be a huge competitive hit no matter how much love or balanced is introduce because:
Purely balanced match is boring when you have only a few type of ship and weapons and really few abillities and that the battle is mostly kill the ennemy or hold that point .
The franchise is not really obtimal : it's 40k nowhere near a "balanced" universe
The player are not really into that type of stuff : the first one lose most of it's multiplayer base quite rapidly if i remember not because the lvl up system was boring (was the only thing great i would says) but cause having battle after battle without engagement or really meaning IS boring.
Maybe it will be in campaign but what this game need is a persistent multiplayer type of game : something to make you care if you lose X ship and make you want to warp him out (cause right now don't even see the point ) . As well as a system that allow you to have custom amount of points in to the battle like instead of point you have a fleet and you choose how much ship you bring (you won't bring all your fleet cause you need it for other battle) .
Something like :
You have a fleet of 10000 points and some objectives on a map, you dispatch your fleet between few objectives and "reserve" and the ennemy do the same (you don't see totaly what he does) and when you enter end turn each objectives contested launch a battle between the vessel there and when it ends you gain point (build more ship?) depending of the objectives . And all the ship that survive can be used for the next turn . It would make big battles and small ones to were saving your ship IS an option .
tl;dr : This game doesnt need balanced flat 1200 point battle with some global effect for unique change that have no other meaning than ranking you . It need meaningfull and various (in size , objectives and gameplay) battle even if it's not always fair.

Yep, I'm afraid the second game will have even less PVE non campaign content than before. Which was already minimal, compared to DoW series and other such games.

The progression was bad for PVP, but it stayed for abilities, and it will only unlock in PVP.

There should be no progression for PVP. Perhaps it should not even have abilities and upgrades.

PVE should be as it was in BFGA1, with the same upgrade systems.

Exactly! There are a lot of players who don’t prefere PVP. Me and a lot of my friends enjoyed the skirmish in the first game and progression and ship-leveling was the only thing kept us playing the game. If there will be no PVE progression and building a persistent, personal fleet would be a nobuy for us all (almost 30!! people of our 40k Club).
Devs read forums (steam etc.)!!
Think of it if you really would release the game like this!
Think of your other promises (bigger fleets for example) you made!
Don’t tell us, what we want to have in the game!
Listen what we want or you will lose money and confidence!

last edited by
B
B
Bentleydog Reply Quote

As a primarily single player focussed gamer it would be much more enjoyable for me to have a option to modify the points available in a skirmish battle (say between 600 and 1800) to allow me to vary my fleets more.

no skirmish XP. so I'll pass on this one entirely.

Also, gating stuff in MP is absurd anyway, either its a level playing field, or you should ditch ranked entirely.

Edit - Devs are adding this in for release.

Point One:
I agree with an earlier poster that 600 is WAY too small for 2v2. For a game which claims to raise the scale of battles 600 is far too limiting.

Please ensure that EVERY faction has a Battleship available to them and that the points cost of them allows every faction to field 2 as part of a 2v2.

That said either ship points should be adjusted to allow those combinations or 2v2 should simply be bumped up to 700 or 750 points each to allow every faction to take those ship numbers.

People very much the ability to customise their ships and NAME them (or at least create names from an approved faction wordlist name generator similar to that which names the ships at present) in multiplayer, be it skirmish or ranked.

Each ship should be customisable and saveable with 4 additional upgrades alongside the two chosen at the faction select screen as part of the match.

Basically bring back some of the Engine, Generator, Hull, Deck and Weaponry skills of the first game but lower the buffs they give so that players have the ability to make small refined adjustments to how they want their fleet to play.

5% is not much and in fact just a random figure I pulled to show that even with such a small change the PSYCHOLOGICAL attachment the player has to their customised fleet and feeling that those changes make the fleet behave different to other 'builds'
(all of course unlocked from the get go) enables the game to have a deeper level of strategy.

The first games problem was matchmaking and the level system and pitting players together that had full unlocked skills vs players who had very little or were starting out.

Please in a future game update at least return these upgrades to the multiplayer for skirmish at least but seein git in 2v2 multiplayer ranked would also give the game more longevity.