Rating weapon variety across all classes
This topic has been deleted. Only users with topic management privileges can see it.
Q
Q
Quadsword Reply Quote

Rifleman / Observer / Commander:
Pretty good overall. All 4 rifles for both factions feel like they have their own distinct niches. The G3 is a good mid-range heavy hitter, the M16A4/A2 are nice all rounders, and the G36, M4, and both AKs, while there is some overlap, still feel relatively distinct.
The only thing that bothers me is the fact that observers and commanders just get standard rifleman kits with nothing unique. I feel like these classes should get a unique weapon or two to make them a little more interesting. Perhaps an ACR for security and maybe an AS VAL for insurgents?

Breacher:
Not so great if I'm honest, mainly because it feels like every primary the breacher has access to gets overshadowed by the shotguns. It's not that the other weapons are bad, it's just that they don't really compare. Why would I take an MP7 that'll run me at least 7 supply to get it configured properly, when I can have a shotgun with flechette rounds for less than half that cost? Not to mention the carbines are also available to the advisor, so you may as well just pick advisor and leave the breacher kit for your teammate who might want to use a shotgun.
The breacher not only needs its current SMG choices to be a bit better, but also have a few more to pick from. Perhaps a UMP45 for security and a PP-Bizon for insurgents?

Gunner:
One gun per faction. Boring. Not to mention the current meta favors using the LMGs in a somewhat unorthodox fashion, essentially running them like high capacity assault rifles rather than MGs.
I'd like each faction to have weapons that act as counterparts to one another. Maybe security could get an M240B or M60 to act as their counterpart to the insurgents' PKM, and insurgents could get an MG42 (yes, they've actually been seen using these) to act as their counterpart to the security's M249.

Demoliton:
Not much to say. Standard rifleman kit with some more explosive options. Bit annoying how you don't start with full ammo for the underslung launcher / reloadable rocket launcher and have to fill up from a supply cache.

Marksman:
About what I expected. One bolt-action and one DMR. My only gripe is that bolt action rifles can't reliably one shot targets, so they seem redundant when compared to DMRs. Much as I'd like to see more DMRs and BA rifles to pick from, they'd likely just end up being alternative skins rather than different weapons.

Advisor:
I think the insurgent advisor gets a bit of a raw deal here. While the security advisor gets the L85A2 and Mk17, the insurgent advisor only really gets the FAL (I don't count the SVD since it's also on marksman). Insurgent advisor needs some more love. Maybe something like an AN94 (Though I understand if this wouldn't be realistic since, as I understand it, the AN94 is pretty rare).
Additionally, I don't really get what the Mk17 is supposed to be good for. It just seems like a crappy version of the G3, currently.

The advisor class could have some pretty exotic weapons depending on what country they're supposed to be from or just an excuse to have some fun weapons that don't really fit.

Having an advisor on your team could also unlock certain weapons/equipment for other teammates if you want to give them a reason beyond fancy guns.

Totally agreed on nearly all points.

Commanders IRL tend to just have basic rifleman weapons, though sometimes geared more for longer range engagement. It might be interesting to give them access to the Marksman's DMR options.

The Insurgent Adviser does get the AKSU as well. But maybe also give them access to a Security weapon like the M4A1 or G36?

@maa_bunny I just think it could be a neat way to distinguish the commander and observers from common riflemen to give them some more unique arms.

Really, though, it's just an excuse for me to have those two guns in game

Forget about AN-94 and AK-12. First one was a controversial gun, produced in a very little numbers and second wasn't even in production at all. Even if Insurgency is not depicting any certain conflict, it's not so detached from reality. So, unique or scarce firearms are not welcome.

@chonma-ho AN94 I perfectly understand not being in, but I could've sworn the AK12 was supposed to be the modern replacement for the old AK pattern rifles? Maybe I'm confusing it for something else?

@quadsword You're correct, the AK-12 was selected as the official replacement for the AK-74 within the Russian Army earlier this year. Budget cuts within the Russian Army have slowed adoption, so only a handful of units have been equipped so far, and US sanctions against Russia have severely limited the export market. For the immediate future, the rifle will be very rare outside select Russian Army units.

@maa_bunny even if AK-12 is adopted it was seriously simplified. Here is the picture of two rifles. One of them is customised AK-74 and other is the current version of AK-12. 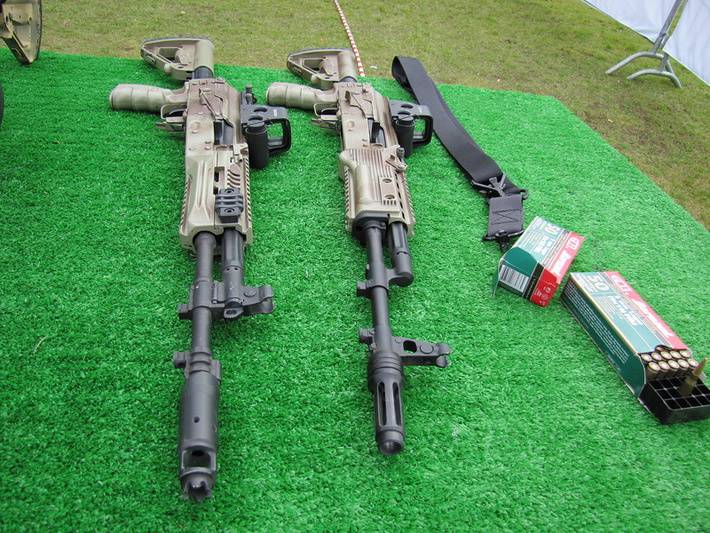 Why would someone need one more AK-74?

-> Not bad choices IMO, although the G3 with a Long Barrel is pretty OP since it one-shots Heavy Armor players.

-> Shotguns are disgusting. Personally, I think it's good that shotguns are actually good, but the other weapons are extremely redundant in comparison.

-> Could definitely use more weapons like a Galil (AR / SAR) or maybe even battle rifles like they had in Ins2014.

-> Yeah, that half-assed ammo you get for explosive weapons is pretty annoying.

-> Bolt-actions need to just have a Long Barrel by default IMO to give them more consistency (although the M24 just needs a straight-up damage / velocity buff bad) as well as the ability to add other barrel attachments like suppressors. Personally, I think the Long Barrel should just be taken out of the game due to how strong .308 battle rifles become with that attachment equipped, as well as the slight redundancy (you're not supposed to be doing long-range sniping as a Rifleman or Demolition man anyway).

-> I've got posts somewhere about possible Ins Adv weapons to add later (EDIT Found it). The Ins Advisor does get the FAL but it's a counterpart to the M14 EBR and he doesn't get anything to counter a L85 / SCAR-H. I also think he just shouldn't get an SVD at all. Give that to the guy who's actually supposed to be a sniper.

Norinco CQ (really just an M16, but I'd like to see more Chinese-made weapons for insurgents)

@MAA_Bunny ..and AK15 - they are both in service - until the end of the year the factory said they are ready to deliver to all armed forces important quantities. They invested in modern machinery (saw that on Youtube - RT channel [RT = Russia Today])

@CHONMA-HO ...in the meantime Russian chosen AK-12 and AK-15 - they are already in production