G3 reload animation.
This topic has been deleted. Only users with topic management privileges can see it.
I
I
immortalwombat Reply Quote

So I noticed theres a mag dump animation where you kick out the mag like you would with an ak. Sitting here trying to do that with my g3 and it really doesn't seem to work like that. the mag well is too long. They dont drop out freely either. Have you guys tested this? Maybe it just dosnt work with my mags or rifle. The recoil is also way to forgiving in game. It is a 308 battle rifle.

That's a good question. I don't have a G3 to try it out on, but I can certainly see how it would be quite challenging. I know it's possible with an MP5, but you need to get the magazine to line up just right - it's not nearly as easy as with an AK.

you can do it with a Lee Enfield lol, as long as you press the mag release with your finger because it is located in the trigger guard, thus unreachable from another mag. it makes sense the mag well is too deep on the g3.

@immortalwombat I've never been around a real G3 but if you hold the mag release would it just fall out kinda like all the M16 variants and similar ones?

@immortalwombat I've never been around a real G3 but if you hold the mag release would it just fall out kinda like all the M16 variants and similar ones?

No from my understanding, the G3 uses the "tilt" mag release system like the AK variants use, meaning you have to physically tilt the mag out rather than being able to drop it like AR15s can. imagine the mag is held in place by a hinge for example.

@zucchini is the hinge on the same side as an AK or SKS or what have you though? I could watch a video I guess but I'm lazy

exactly the same, https://www.youtube.com/watch?v=YAwM71383C0 watch how he has to rock in and out the mag for it to leave and enter the gun

It's been a little while since I've driven a G3, but I don't believe the G3 has rocker mags like the AK series or M-14. The mag well is deep enough to not need two points of attachment. It's mag release works like the MP5, with the thumb paddle activating a cross-bar very much like the AR-15 mag catch.

The mag well is shallower than the AR-15 or SCAR-H mag well though, so a lot of people will still index the mag to the front of the mag well and insert it with a slight rocking motion. But I do not believe it's necessary.

With an MP5 it's technically possible to hit the mag catch and have the mag fall out on it's own. The mags aren't smooth though, so this technique is not very reliable, especially with an empty mag. I can even actuate the mag paddle with my trigger finger, but it's not a very comfortable stretch.

@zucchini Don't own a G3 pattern rifle myself - but to my understanding it's not exactly the same as an AK at all. The AK variants have a locking lug on the front of the magazine that acts as a pivot - not a hinge - for the magazine to rock back into place, with very little actual magwell at all to support the magazine:

HK's design however has a much deeper magwell - but it's angled - so the front surface is much shorter than the rear. This means that while the magazine can be inserted directly upwards - at a slight angle - it's easier, to rock it into place, pivoting on the shorter and higher front wall of the well:

If anything - the AK system is a "pure" pivot design. The M4/AR15/M16 is a "pure" vertical insert design - and the HK is something of a hybrid of the both - a more aggresivley slanted - straight-insert that can be rocked for more leverage.

As you can see in this other video over at MAC, and in-fact, in several other G3 videos by Polnar - the magzine can be inserted freely directly upwards: https://youtu.be/lovWMChEZ2A?t=539
In fact in most of their "speed reloads" Polenar's presenter clearly shows this: https://youtu.be/sKBWRRGSkW0?t=36
Every time they dump a magazine and tug it straight out - rather than rocking it. As to why they always leverage it on an insert? Most likely a technique to ensure the magazine is seated and clear any possible fouling.

https://youtu.be/Ds3zqUCduTM?t=283 bonus link of Jerry doing his usual insanity and again - dropping the magazine straight out of the well.

Can the 'speed reload' animation in sandstorm actually be done? With a worn enough mag / receiver. Probably. Would any trained soldier be likely to do it that way? Possibly? I'm not one so I can't say. But the mechanics of the rifle don't completey prohibit it. People seem to be missing that the mag in the animation doesn't drop free. It's swiped out with the fresh magazine, AK style. If it works with the pivoted AK mags/well, it probably has a chance to with the G3.

EDIT: As clarified by @zucchini and @maa_bunny the trigger guard simply wouldn't allow the same technique as the kalashinov family without modification (or clipping). The whole fast-reload animation needs to be re-thought, my bad.

Either way, it doesn’t work the way it’s currently portrayed though, right?

@11-11-11 LUG!!! I couldn't remember the bloody word thanks XD hinge was just a way of thing about it. from my understanding the only reason you can't to an AK style - use the new mag to flick out the old technique on the G3 is because the trigger guard gets in the way, as you can see in the pictures above

My primary concern about the reload animation in the game is I'm not sure you can physically actuate the mag release paddle with another magazine. I just don't think the geometry between the release paddle, trigger guard, and magazine allow it to be possible. But, I don't own a G3, so I can only make a guess based on past experience.

I just don't think the geometry between the release paddle, trigger guard, and magazine allow it to be possible. But, I don't own a G3, so I can only make a guess based on past experience.

Yep I'd have to agree. Unless the user has particularly long enough fingers to press the magzine release button while swiping out the empty mag (and most people don't, that button is genearlly considered unreachable unless you're a giant or have tentacles for fingers) 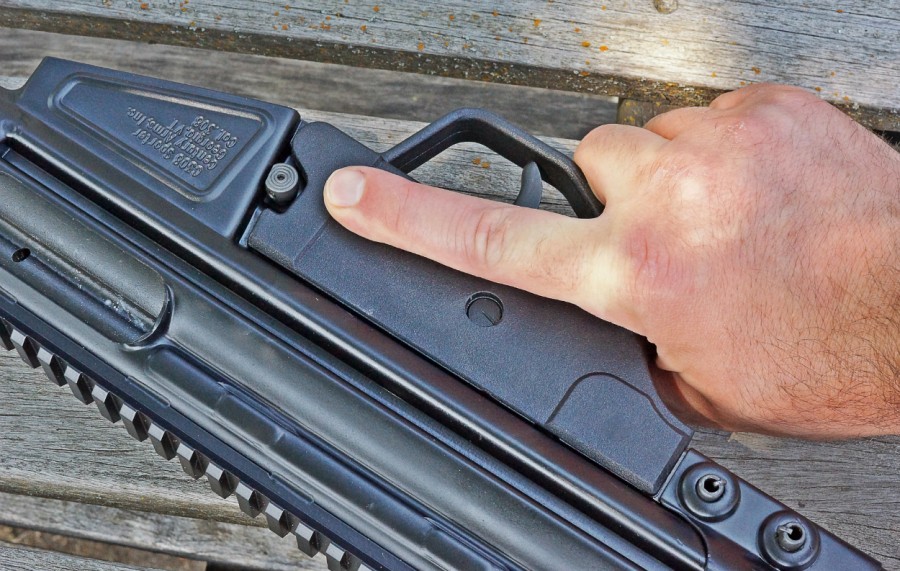 The current in-game animation is at best highly impractical - at worst - only acheivable by allowing the new mag to clip straight through the trigger guard.

Either way I agree - the fast reload animation needs a rework to bring it back into the realm of possibility.

The best option may be to do something like the G36 reload animation where the character uses their thumb to active the paddle and push the old mag out.