video spintires mudrunner america wild
This topic has been deleted. Only users with topic management privileges can see it.

please correct me if I am wrong, but this is a platform for vehicle transports ??? 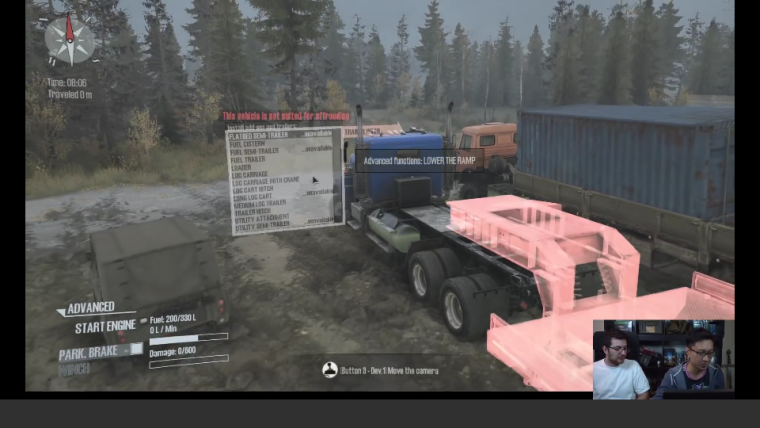 @fabio-brasil yes but might just be work in-progress to become 4 garage points, but never lose hope

I'm just referring to the weather change in america wilds, the rest of the maps continue same thing

Check out an existing summer map. You'll probably see it looks just like this America DLC. I just played one last night. It's a lot more colorful than the usual fall scene, which most of the stock maps use. I agree those are more gray, but I wouldn't say excessively so.

new video but it's short

@sodoma
More than likely the other map with be just a slightly different variant than the one showcased. I had hope and was looking forward to this dlc but now I'm really disappointed and definitely not going to purchase this dlc. For one the f150 and blazer are 2wd which is a waste because both are more common in the 4wd variants here in the U.S. Also the maps just look dreary and boring, why do they always have to be fog covered and gloomy. The maps need more color and lighting, this is not at all how the locations that these maps are based off look. This seems to still be located in the Russia. The dev team could of revived the game and took a step towards the better but they just failed and took a step backwards. Yes they put in some iconic american vehicles with licenses. But they made them 2wd ( blazer, f150)which is pretty much renders them useless in this game due to the kind of maps we get (correct me if I'm wrong). Honestly the only part of this dlc that would be cool for console users would be just having the humvee, blazer, and f150. Now the functionality maybe not so much, but when it comes to the maps just from what we have seen in the video you might as well save your money and just play The Ridge or Downhill. Not trying to be all negative but this dlc seems to just be a slap in the face to the user, I know not everyone will feel this way and I'm sure the diehard fans will come out and try to troll this post

I had hope and was looking forward to this dlc but now I'm really disappointed and definitely not going to purchase this dlc. For one the f150 and blazer are 2wd which is a waste because both are more common in the 4wd variants here in the U.S.

Why are you spreading misinformation here? What's your agenda? The first video clearly shows these vehicles are 4WD.

@unster link me that summer map

@fabio-brasil i want to see those 2 tractors in action

@zamal
This is the summer map I was playing last night:
https://steamcommunity.com/sharedfiles/filedetails/?id=1355968376

Among the stock maps, I believe both DLC maps (Valley, Ridge) are summer maps.

@unster is this good for logging and challenging too? cause thats what i do

@zamal That's what I'm after too. I could give you a whole list of maps that I've enjoyed but I'd have to look them up. The one I linked to seems good. I've only played it for about an hour or 2. I don't play any maps that don't have logging, are too easy, look like they're of poor quality, or are unreasonable in some way. Another summer map that I enjoyed and is probably more challenging than this one is called Last Chance. Look it up in the workshop. There's also a Siberia level (I don't remember the exact name) that has a nice late fall scene with some snow on the ground.

I use summer remastered and nvidia freestyle... even on stuck maps I got the same effect like in aw video.... so this dlc is simply useless for me... all the vehicle's are available as mods...
Can recommend to everyone use summer remastered...it makes every map looks like summer (has better textures...new plants.... everything is green) and frèstyle us much better than reshade.... more filters...easy use...

@unster like I said correct me if I'm wrong, the video I saw only showed them being 2wd ,now the bison is only 2wd that's to be expected though. But as for everything else including the maps and setting I'm pretty much spot on. Still feels like the setting is Russia, just gloomy and boring. I don't know why they dont add in more color and get rid of the fog, that's not at all how the U.S looks in the regions that this is based off.

@sloppyslingers The fog is most likely because the engine can not display distant objects correctly, maybe it is also about performance issues. Anyway, such a fog in the game in 2018 is absurd. The range of drawing objects is also very poor, fog is hiding objects popping up. Maybe I'm wrong, maybe someone knows other explanations.

@sloppyslingers
What video did you see that showed them being 2WD??

My opinion is that Longridge is overrated. I played it to completion but I found it more annoying than challenging. There's no way in real life the people working there wouldn't build a ramp or bridge here and there to eliminate the ridiculous lengthy detours.

"...There's no way in real life the people working there wouldn't build a ramp or bridge here and there to eliminate the ridiculous lengthy detours."

Unfortunately usually we build bridges only to stolen lands...