Vehicle Presentation - Introducing The Chevrolet K5 Blazer!
This topic has been deleted. Only users with topic management privileges can see it. 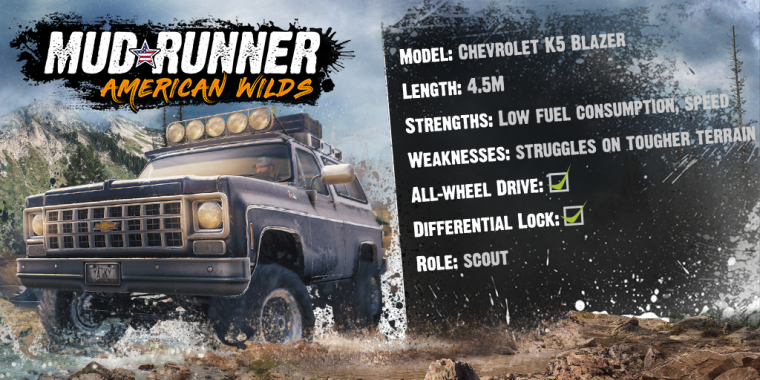 American Wilds is a new DLC coming to MudRunner Fall, 2018! This large DLC will introduce brand new content to the game, including several new vehicles, two new maps and a whole new location - The United States of America!

Today, we're very excited to be talking to you about the Chevrolet K5 Blazer!

Vehicle Description:
Able to use four-wheel drive, and equipped with differential lock, the Chevy K5 Blazer is a powerful all-terrain vehicle. Able to pick up high speeds, the Blazer is able to zip around the map and scout out tricky routes very easily.

Strengths:
At home on the roads, the Blazer is nimble and equipped to scout out new trails as your starter point vehicle, making it your best choice for a point vehicle in the early game.

Weaknesses:
While the K5 is self-sufficient enough for long scouting trips, it's smaller add-on complement means it won't be spending the whole game without support.

Good job, I can not wait to see the big monsters.

the appearance looks great, faded and rusty as it has to be,

last edited by fabio brasil
U
U
Unster Reply Quote

I wonder how this one will compare to the existing mods (appearance-wise). There are some really good mods of this type of vehicle (K5, K10) already available.

Seems like we got ourselves a new driver folks...

I assumed a K5 Blazer does OK on tough terrain? I know Spuns do.

I assumed a K5 Blazer does OK on tough terrain? I know Spuns do.

@martin-ward-444
Search for it, it‘s just 274 times mentioned in the last weeks

last edited by
B
B
BRazz989 Reply Quote

@brazz989
That guy needs a more aggressive tread on his tires. There isn't much to grip the mud with. Tire size isn't everything.

So hyped for this DLC! brighter colours. Decent 4x4 trucks and hopefully some real mountainus terrain with lots of side trails to explore! Keep up the great work on this game. The last update with improved transmission and softer tire physics really improved the gameplay for me. A sequential gear shift option would be amazing instead of three low 1 high gear. Being able to shift through more gears would really put this game on another level.

@jayson
I always thought the engine sounds were pretty good in this game. What doesn't sound good to you?

looks good, cant wait to try it out, im really hoping its not going to handle like the blue uaz

Really hoping for a k5 blazer from Chevrolet....

well would u look at that, dreams come true and with rustiness as well.

last edited by
B
B
BRazz989 Reply Quote

Really hoping for a k5 blazer from Chevrolet....

well would u look at that, dreams come true and with rustiness as well.

They certainly do! We both got or way lol. I can't wait to take it for a spin!

@unster when you play a lot of Forza and own 2 Cummins deisels and an international DT466 then look at spintires you'll see. I do love how the Jeep's and the B-131 sound. Also the c-4203010 but other then that yeah. Also the 4310 grinds gears on neutral