The Surge - The Good, the Bad, and the Augmented - Challenge Modifiers
This topic has been deleted. Only users with topic management privileges can see it.

Welcome to a new article unveiling more about The Surge's newest expansion - The Good, the Bad, and the Augmented, coming to PS4, Xbox One and PC October 2.

In the bowels of the CREO facility, you'll explore an old and abandoned Quality Assurance lab created to push CREO’s tech to the limit. Warren will face Dr. Rischboter’s deadly test chambers that, for some reason, feel like torn straight out of a twisted Wild West TV show!

The mad doctor’s training rooms are accessible through several access points spread over the environments of the base game. The testing chambers are numbered from 1 to 9, each room being more difficulty to finish than the previous one, but also more rewarding.

Each stage can be customized with a series of modifiers which also alter the rewards for beating the room. As shown in the screenshot below, you can combine up to 4 of 16 insane modifiers available. You can pick a maximum of one modifier for each row. 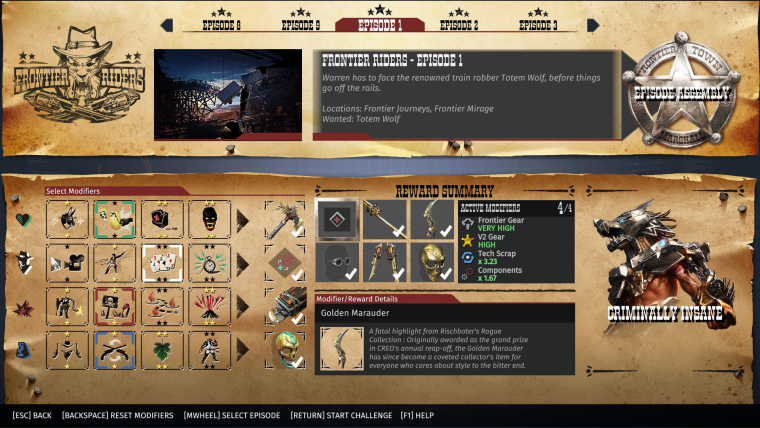 Here is the list of modifiers and their effects:

Lactose Tolerant - After losing health, recollect it as cheesy treats. No injections available.

Leech - Player and enemies steal each other's life. No injectable use.

Chrono-Master - Performing moves makes time move faster than normal and increase the damage you deal. If you do nothing or get hit, it'll slow down again.

Short Fuse - If you don't cut limbs, enemies will go out with a bang!

Fire and Brimstone - Fire traps scattered all around the facility.

Epicenter - Every once in a while, a flame pit opens up right below Warren.

Arms Race - Auto-equip the weapon of the last killed enemy.

Cut-And-Go - Enter the episode without any armor, cut limbs to instantly equip the enemy's armor.

Black Belt - Dispense pain with your bare firsts - and look like a real drunken master! Hitting armored body parts will wound you.

At the end of each stage, fight against distinct Challengers, powerful opponents forged from the training scenarios who are equipped with 30 unique new equipment pieces – armors, weapons, and implants - that you can take for yourself!

The harder and crazier the modifiers, the better the rewards! Each gear from The Good, The Bad and The Augmented has an upgraded V2 version, some have even better hidden upgrades!

The testing chambers are slowly unlocked through the main story in a first run, and all available from the start in NG+. We can't wait to see you test the tons of crazy combinations available, such as the black & white "vintage" modifier

The Surge: The Good, the Bad, and the Augmented will be available on PC, PS4 and Xbox One on October 2.