Can There Be An Option to HAve Scopes Render at All Times?
This topic has been deleted. Only users with topic management privileges can see it.
A
A
AMURKA Reply Quote

Instead of just activating it when someone holds RMB, can there PLEASE be an settings option to make it so the scopes are on at all times, so that the player just has to put their eye up to it and the transition would be natural, rather than it just...turning on? Sure this might mean lower FPS overall, but it would eliminate that stutter, AND for those of use who choose to turn this feature on...the game would be just that much better.

Looking at the scopes mounted on my gun and seeing them be pitch black is really immersion breaking, especially in those cases where I'm already practically aligned with it, like in this picture. 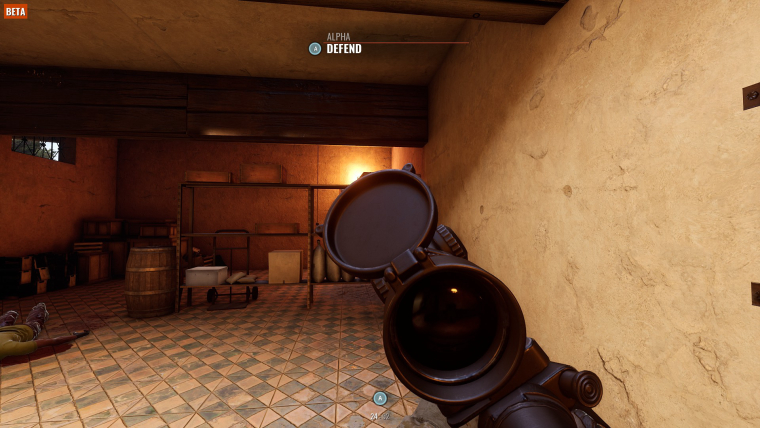 As someone who gets maybe 80-90 FPS with everything on max up to around 120-130 with everything on min (still have never had solid 144 FPS avg) this would be a great option to use all that power, instead of just wasting it on supersampling 150x or 200x.

@AMURKA Do you know what eye relief is? That's how scopes work, it turns black when you aren't close enough or don't have the right eye angle or your eye isn't in the 'eye box'.

"Especially in those cases where I'm already practically aligned with it".
You may have the correct eye angle, however your eye is not close enough.

"Pitch black is really immersion breaking".
The scope is also not pitch black, it does have some reflection and you are backed into a corner so the light is having trouble reach the back part of the scope at the weapons current angle and elevation. If you were to stand outside, it wouldn't be pitch black. Sorry to break the news to you, this is how they work.

And having the scope always show a second 'camera' image would just reduce performance straight up, every frame. I know you said this but the method that is implemented currently is efficient and optimal - only decreasing performance when it needs to (when aiming).

In the OG Insurgency, they had the scopes always show a little part of it being zoomed it, but that is incorrect.

@jarple Well thanks for being just about as condescending as possible. It really helped!

And talk about eye relief all you want...but tell me with a straight face that I should see absolutely nothing through the scope in the picture. I'm practically directly behind it. Sure it would be tiny and super vignetted, but it should still be there.

I'm really not sure why the hell you went off on a tangent about the room reflecting off the glass of the scope when you knew what I meant by "pitch black" was that no light was passing THROUGH the optic. Don't purposefully misconstrue what people say to falsely try to make your argument stronger. It really childish. Makes it look like you're grasping for material.

And why would you bring up performance at all, when I said this would be an OPTION for people who CHOOSE to enable. (You also conveniently ignored the fact that this would eliminate the cause of the stutter that people sometimes get when they go to aim with zoomed scopes)

All around sounds like you're just being a Negative Nancy. Why are you acting like it would personally hurt you to have this be an option in the game? (You know what? Don't answer that...lets keep it on topic..about the merits or downsides of the suggestion)

@AMURKA I'm not even going to finish reading your post, because it seems that you've been insulted and offended by someone who challenged and constructively criticized your post with facts. So if you think I went on a tangent, then take a good look at your own post, it's a whiny tangent. Now that's childish.

I'm not even going to bother discussing with someone who just gets defensive and upset when they are presented with facts and reasonable suggestive critique at every point of your post, such a waste of my efforts. Good luck with the feature though.

@jarple Ahh yes, the 'ol "I was just giving constructive criticism, why u mad bruh" defense. Here's a definition for ya.

Constructive criticism is the process of offering valid and well-reasoned opinions about the work of others, usually involving both positive and negative comments, in a friendly manner rather than an oppositional one.

You basically just made a 3 pt list of what was wrong with my post, without any alternatives or counter-suggestions of your own. That's not "constructive", that's just criticism...

Now back on topic: Here's a video that visualizes what I'm hoping the scope would look like when not brought into ADS.

I handle a C8 with an Aimpoint Pro at work as part of my kit. Unless we are bringing the rifle up to ready, we do not see anything in the scope.

It would be a neat feature, but honestly, it's just not realistic.

Yeah this is absolutely annoying.

I can grab any one of my rifles out right now and guarantee you I'll have a beautiful sight picture the second I shoulder it. If you don't it's because you haven't mounted your scope correctly.

@jarple said in Can There Be An Option to HAve Scopes Render at All Times?:

@AMURKA Do you know what eye relief is? That's how scopes work, it turns black when you aren't close enough or don't have the right eye angle or your eye isn't in the 'eye box'.

IF the above is the case it's because you are using a firearm you aren't familiar with and seeing as you play soldiers in this game it SHOULDN'T be the case. I'm pretty sure most humans that get involved in warfare have had basic firearms training.

IF the scope is completely black, you simply have a broken scope or it's been incorrectly mounted on the firearm OR you aren't placing your cheek correctly on the stock!
You should ALWAYS be able to see through a scope regardless of eye relief. The scope picture just changes in size and clarity, it won't go black.
Also worth noting, the lower the magnification the greater the eye relief. This is why 1-4 magnification optics are used in short to medium range engagements. You can place your head on stock several times over with great speed resulting in different distances from the scope itself but you will always have a good sight picture. They are quick to shoulder and sight onto target without losing field of view.

While I could understand them leaving this silly effect in game for the highest magnification scopes, they need to remove it for the lower ones or drastically increase the speed so it disappears faster. I'm absolutely sick of aiming and having to wait a second before I can even see what it was I wanted to shoot. At the moment all I can say is that it makes me feel as though I'm playing a character in a game that doesn't know the basics of firearm handling.

Edit: Just to clarify, the above photo showing the scope blacked out is correct. I have no problem with that. My argument is 'once' shouldered there should be a clear sight picture but I am getting about 1 second of black before clarity.

@AMURKA Within 1 frame into the video that you linked, you're post idea has already become flawed. Nice reference material. Usually you'd link items in support of your idea, not one's that completely provide counter evidence. The scopes in game are not direct replicas with exact eye relief on an individual scope / brand basis, so perhaps the scope in game is blacked out at that distance. The game isn't 100% mil-sim realism. If you want that, go play something else or go back to OG Insurgency where that was the case.

Now back on topic: Immersion. That is what you want right? Rhetorical and already self-countered in your own reference material. I've seen enough destruction in one day, I'm out. Good luck once gain.

@sharpeyehodgey said in Can There Be An Option to HAve Scopes Render at All Times?:

Edit: Just to clarify, the above photo showing the scope blacked out is correct. I have no problem with that. My argument is 'once' shouldered there should be a clear sight picture but I am getting about 1 second of black before clarity.

That's exactly the reason I made this post. Bringing the scope to your eye isn't fluid. When you go to aim, you don't see the picture growing until the picture is clear, its literally just black>black>black>POOF perfect scope picture.

It's notably different when you have settings set to low scope quality. the transition is much smoother, and while the player brings the scope up to their eye it scales up the zoom linearly.

With scope settins on high the gun is brough up in the same animation, but the scope itself just stays black until the very last millisecond and then POOF it turns on the 2nd render picture. I'm just arguing for that scope picture to be always on, so the transition will be more natural, and it will have the added benefit of eliminating the huge stutter some people get when the 2nd render of the scope "turns on". (for the cost of lower FPS overall)

More examples of times you should be able to see through the scope. 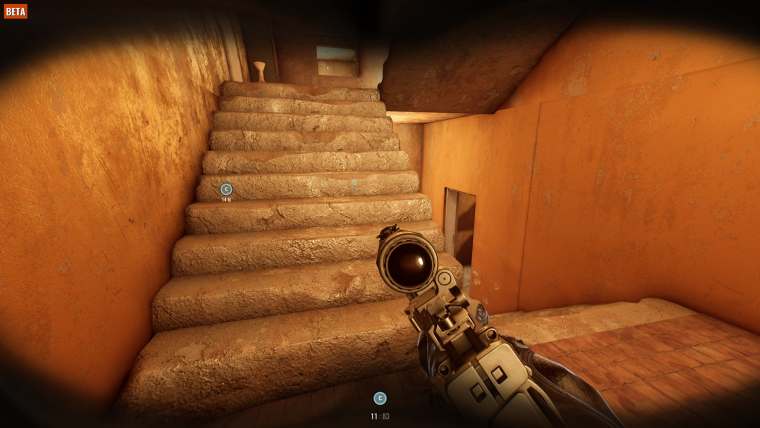 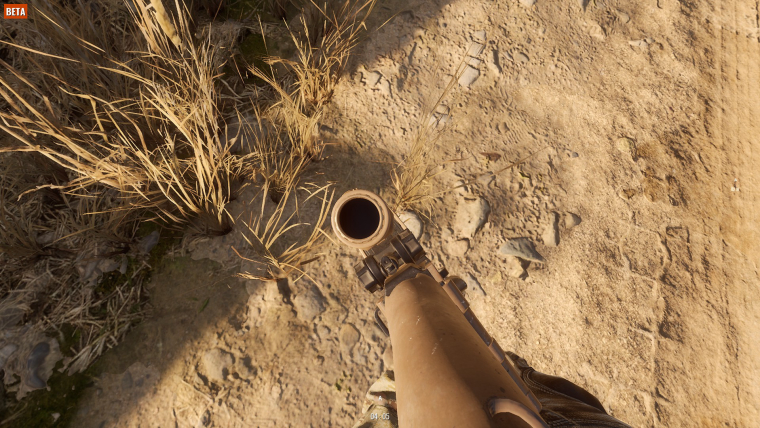 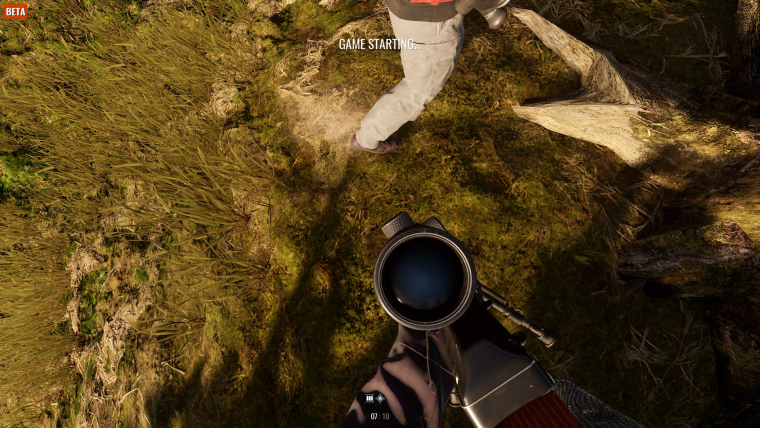 Basically any gun with a scope when you lean left and look down.

NWI could do something similar to Ins2 where you do occasionally see through the scope.