Is Hitreg still poo for bolt actions or was I trolled by armor?
This topic has been deleted. Only users with topic management privileges can see it.

watch this clip and tell me what you think.

First clip I was near on center and somehow the shot didn't register. Second clip seems to be an armor hit or at the very least a shoulder shot, got the blood splatter but no kill.

Was it hit reg?

as for the clip. 1st shot you nicked his shoulder and backpack. Second shot...just as expected, you shot him straight in the vest. 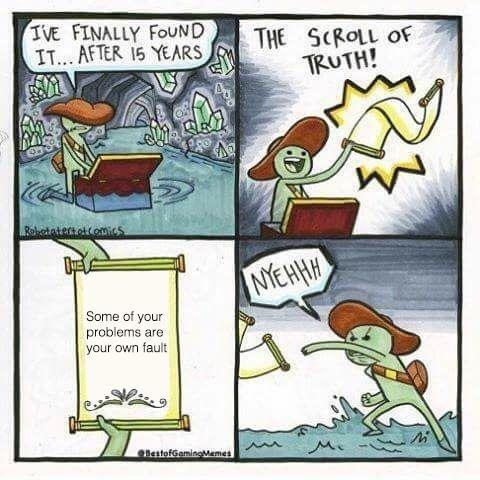 ... You could have lead with that as a constructive response, but instead you troll.

Good for you buddy. Now move along.

It's clear you missed the first shot, you might had to aim lower if the game models zeroing and you were zeroed higher then the distance to the other player. The shot clearly hit the ground behind him, i also don't know if the backpack of a player is in their hitbox and what modifier it has for damage, too.

Looks like you hit an arm shot on the second guy, i was going to claim you might have hit the second guy in the leg but i can't see that.

On an unrelated note, your sensitivity is too high, it's picking up you jerking your hand up and right when you click, you might want to try loosening your grip in the mouse too.

@amurka said in Is Hitreg still poo for bolt actions or was I trolled by armor?:

AWP's in CSGO also fail to one shot players in arm or leg hits on common occasion.

@biass Well at least you both knew what I meant when I said AWP. (expecting a one hit kill on everything)

I've already posted this in a diffrent thread but there is definitely something wrong with the bolt-action snipers, as I've had bots eat a headshot like it's nothing and then remember that being shot in the head is very-not-good only on the second follow-up headshot.
And I've had unarmored bots take 2 centre-mass shots and die on the 3rd.

I'm probably going to try and record this non-sense tonight when I get off work, this happens fairly often for me.
(Atleast it's good headshot practice though)

My bad, I forgot to mention it happened yesterday.
In the previous thread that I brought this up I did add that this kept happening even post 6th Sep patch.

Oh ok then yea I guess we need to keep problem solving it then. Having the gunplay feel snappy and responsive is key.

But I will say that almost every single "video proof" I've seen lately has just been them missing, or them hitting armor. (or arm, then armor behind it)

Haven't seen a "headshot not working" video since the patch.

if you can look past the clips being a bit messed up (especially the last one) and me playing like a bot, see here: https://youtu.be/r5_pKXMpslU

I also have had issues with bolt action snipers, taking more than one shot to kill. Even head shots.

@EastClintwood there's been a rumor going around that most of the rifle calibers including the calibers used in the bolt action snipers take around 2 shots to kill, which is kinda ridiculous because that just intentionally makes it where snipers are actually useful compared from what they were in insurgency 2 as they were always guaranteed a one shot above the legs.

I tested both bolt actions out on an offline match. Every single shot to the chest (regardless of armour worn) resulted in a death. Try it out for yourselves, main menu LAN option.