Network Issues
This topic has been deleted. Only users with topic management privileges can see it.
D
D
Dark1202 Reply Quote

Still having network problems. I'm rubber banding, players cut off on their mic, but for some reason hit detection works great.

My Internet connection is far above normal broadband standards and internet speed tests clock out at 1 ping, 195 mbps upload and 179 download. These speeds are nearly twice of what the maximum display is on the speedometer.

Yet, strangely I'm having network issues. None of my other games come even close to this. Also, several players I've talked to in-game have experienced this as well, so at this point I know I'm not an isolated case.

@dark1202 speed test doesn't mean shit in this case. First as far as we know you might be in Alaska and pinging the nearest local router. Second for gaming it's not about the speed but the latency and integrity of the connection. Losing packets might get you a lot of rubberbanding. So yeah it's hard to say from this picture.

Ok, that's fine. So how far away do I have to be from a server to get an accurate picture of my ping? The region I'm playing in is the same one that I'm living in... So I assume, to determine the upper limit I'd test it with a server that's still in my region, but as far away as possible.

Ok. So I just ran a speed test using a server that's in the furthest city as possible from me, but still in my region. 33 ping, 161 download, 131 upload. Everything maxed out on speedometer again. So I think we can take that one off the table. Also, pretty sure speed is a factor in gaming so I don't think this is an accurate statement on your part. Otherwise people with a 56k connection could play online with everyone else.

In addition, here are some other people I found having the same problem (high speed Internet, other games are fast as hell, this one has high ping issues).

Feedback is somewhat accurate in asserting that speed is rarley the most important networking variable when it comes to gaming. These days most infrastructure can support the speeds that game traffic requires (rarely more than 100mb/hour or 30kb/s).

Check out this graph by the excellent Youtuber, Battlenonsense - who has built their entire channel around investigating and explaining the networking behavior of multiplayer games: 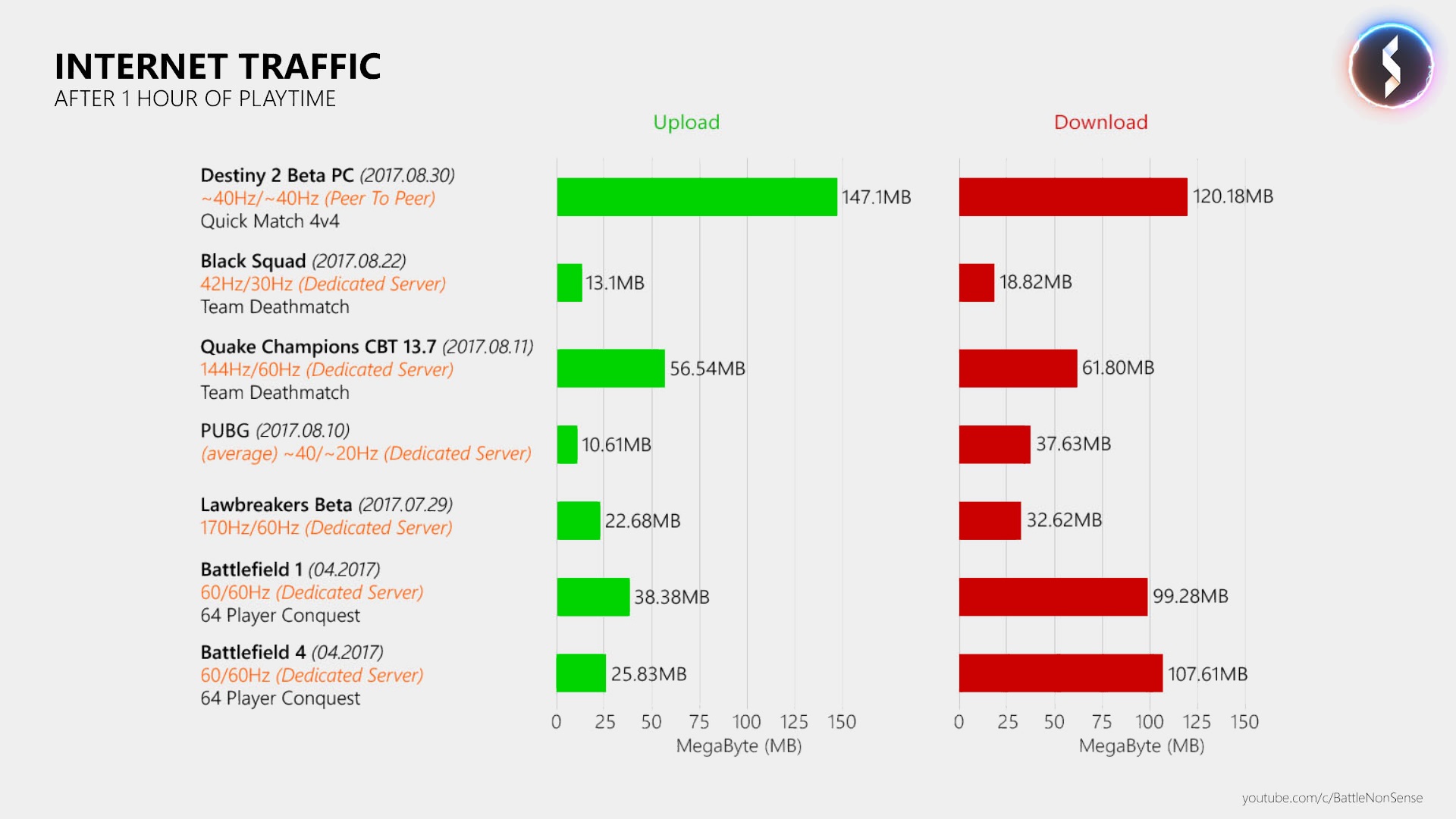 I highly recommend anyone who wants to know more about how multiplayer games tend to function, and the important factors of your connection for gaming - check out Chris's video covering the basics of game networking.

In the case of Insurgency Sandstorm? The game already has the option to show an overlay detailing how much bandwidth up and down it's using in realtime, as well as the ping to the current server. We don't know for sure the accuracy of these stats, but it's likely ping and things like packet loss and bufferbloat are more important than raw upload or download speed. All of these can easily be checked by running DSLreports test (be sure to choose the appropriate test for your connection type).

Wow... very interesting. Thank you for taking the time to post that information.

Also, what about the servers themselves? A lot of people are claiming on the links I posted that it may have something to do with the servers hosted by the game. Which would make sense.

Why else would all these people, including myself be able to run other games with 0-75 ping but this one has crazy ping spikes?

@dark1202 The servers could potentially either have problems with bugs related to the Beta builds, or may be overtaxed/underscaled for the amount of players that are on them right now. Or there may be systematic issues with the games networking code. We simply can't tell at this point without further investigation.

last edited by
I
I
inigowilson Reply Quote

Use https://testmyinternetspeed.org/ for internet speed test. This calculate right value and provides solutions for network issues.