Body armor balancing suggestion
This topic has been deleted. Only users with topic management privileges can see it.
K
K
KiroV_ Reply Quote

Navigating around the forum, I saw many concerns about the heavy armor and TTK. After some damage tests, I have several suggestion that should be made to balance out the impact of armors (especially Heavy ones).
Here I will assume Heavy armor is Level 3+ Body armor type.

This is how feedback and suggestions should be given, instead of the so common style that gamers with entitlement mentality scream out on forums nowadays (especially on the steam forums).

I agree with the ideas, can't really comment what percentage a weight penalty should be etc. I don't how well you could sprint in heavy armour irl, probably not that fast. Accelerating to full speed in heavy armour should be also much slower imo!

There should definately be a movement penalty after getting shot.

Personally I would even go further and do what they did with the HE/AP system. If something is so good/important that the "choice" to pick it is no real choice after all, then just delete it out of the game. I also don't think that the armor system actually adds anything really useful to the game. I think we should get a third option for carriers so we have light, med and heavy carriers that will have a impact of how many ammo etc you can carry.

If it stays in the game it should massively slow down players. Sprinting speed should be at least reduced by 30% and the overall stamina should also be lowered to at least 30%. Just being more vulnerable in open fields does not seem too much of penalty for me, considering that most map have a lot of cover.

Armor should also only protect the chest area if that is not already the case. I do hope that armor is not simply a direct buff to character health.

I agree that we definitely need some sort of action happening when a player is getting hit by armor. As suggested i think players should get things like a blury vision and aimpunch. Apart from that I think it should instantly reduce the stamina of the player to 10% what he currently has left. So if the player is lucky he can quickly get to the next cover, but not just run away.

If they using the old mechanic from INS2, the light and heavy armor should reduce damage by 50% and 80% for the whole torso area respectively.
But due to the lack of AP/HP making armor too effective, I suppose the area protected by armor should be reduce, like making it protect area that really have the armor plate covered 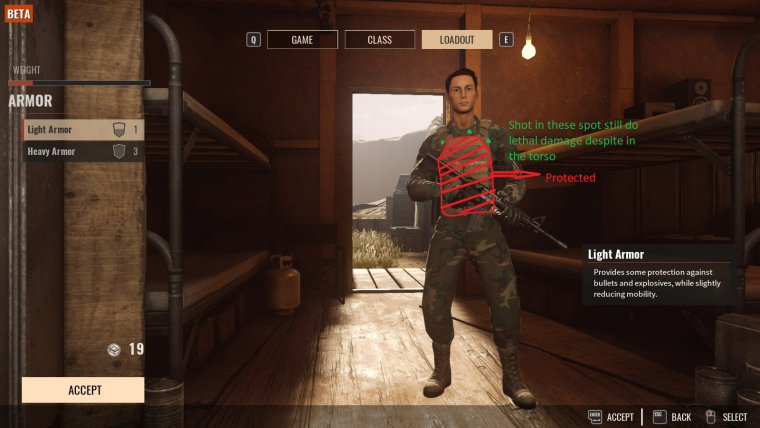 I hope this will help people less reliant on armor and encourage people going for other area like shoulder, underbelly apart from the head.
About the stamina, how about a smaller debuff on the speed of wearers, higher stamina decrease rate that slower them down the more they run (making them run for short distance from cover to cover, instead of brawling)?
Also the weight system should be less generous like in INS2 since we can buy a RPG, AKM with GL, Heavy vest and Armor and running around like Sanic.

Decreasing the armor hitbox is a good suggestion. I'm bumping your post because this idea is a unique one.

You know how your characters momentum carries you into a slide if you attempt to crouch while sprinting? What if trying to do a 180 decree turn while sprinting at full speed made you fall over on your back if you were wearing heavy armor?

looks as though the heavy armor would have front, back, and side ballistic plates. From experience, with a full load of ammunition this would add around +50lbs to your body depending on the ammo type you're carrying. The little groin flap is only kevlar, no real protection, except from shrapnel. The penalty for heavy armor is definitely not high enough. Even the light armor would add 30lbs.

looks as though the heavy armor would have front, back, and side ballistic plates. From experience, with a full load of ammunition this would add around +50lbs to your body depending on the ammo type you're carrying. The little groin flap is only kevlar, no real protection, except from shrapnel. The penalty for heavy armor is definitely not high enough. Even the light armor would add 30lbs.

Yes, 25kg(50lbs) is a lot. Even 10kg(~20lbs) is a noticable difference in feeling of the movement real life. I know this is a game, but I think real life should be used as some sort of reference here. How fast can you accelerate to sprint speed with extra 25kg(50lbs) weight on you in real life?

Or how fast can you zigzag?

Exactly what I was thinking about. I hope the devs will accept this suggestion.

A solid bump for this post. As a long-time (1.4k hours deep) insurgency 2 player, I also found the armor to be too powerful and not carry enough of a penalty to movement. I hope NWI will take into the consideration all the feedback they get regarding that matter, especially great feedback like this post here, and integrate that into sandstorm in as-balanced-as-possible way. I'd like to see pistols and small-caliber firearms becoming viable again, rather than everyone packing heavy armor and the largest caliber of gun they have access to.

Well TBH, the effectiveness of pistols against all body armour is non existent, they are horrible for shooting people with, when compared to a rifle. So pistols being crap is realistic.

Accurate hitboxes for armour is a very cool idea if it can be implemented. I'd like to see customisation rather than 2 choices. Just let us put stuff on our armour like we add accessories to a firearm.

Plate Carrier as a base and adding NIJ level 3 or 4 armour, side plates, groin protection (no rifle resistance for soft armour), neck guard, arm guards, A PROTECTIVE HELMET (rifle rounds still go through). Every accessory obviously costing points and weight

Is it okay if I bump it one more time?