Add the Option to Delete/Easily Edit Loadouts (Please Change Goddamn It)
This topic has been deleted. Only users with topic management privileges can see it.

With many combinations of all of the weapons, equipment, ammo, and armor, it's convenient to create loadouts, but for people who want to organize their loadouts with detailed titles, it's annoying to get stuck with loadouts with misspelled names.

I wish there was a way to easily delete or edit loadouts than before. Aside from being stuck with accidently misspelled loadout titles, there is no easy option to edit current loadouts, and the only way that I know of to update current loadout is to save a new loadout with the same name (and if you accidently misspell the name of the loadout you want to update, you're stuck with two loadouts) 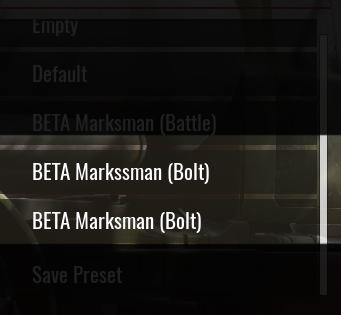 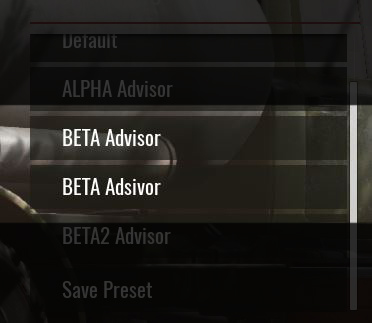 [EDIT: For god's sake, please upvote this suggestion instead of just passing by. I argue that this issue would be one of the easiest issues for NWI to fix. Personally, this will help playing the extended BETA2 version of INS:S way more bearable for all of you highly organized players!]

I agree. I like to customize a lot, and it's overwhelming with so many. A delete button next to each preset load-out, say a red 'x', would suffice. I expect to see this in the final version, I hope to see it in one of the Beta updates...

I came to the forums for a very similar suggestion. I found myself going through the majority of the first few matches I was in messing with load outs.

I think it would be really important to have the ability to customize them without being inside of a game.

Pretty sure that's what the "Loadouts" section you can get to in post match and main menu will be eventually. It's just not done yet.

I've never created a load-out before lol, but there should be functionally to do such a thing.

Most likely when the game launches, the reset hopefully wipes the saved load-outs as well.

@jarple Never have either for any other FPS game that has the option to have loadouts, but I found myself experimenting with loadouts in Co-Op from experimentation before applying them into P.V.P. to something fun like a pistol-only loadout or a "suicide bomber" loadout.

I have at least three loadouts for every class so far, and being OCD, I like to name them with good names that slightly explain what loadout "does". For example for the Security faction's Marksman, I have a loadout with the MK14 EBR with a Holosight, Foregrip, Laser Sight, and Compensator. To me, that's being CQC with a battle rifle, so I named that loadout "CQC Marksman".

And sometimes, I accidently misspell my loadout names, and it's a common annoyance to see my spelling mistake, unable to fix or delete the loadout...

I really hope in the final release, there will be an option to edit or delete set loadouts.

@quenty Ikr! There are so many weapons with a large opprotunity to customize. No way I'm starting a match without organizing a few loadouts.

I hate not able to edit or delete loadouts easily. My loadout title's spelling mistakes is personally one of the most annoying thing in the game with the TTK and the BETA2's current optimization.

@maa_bunny Yeah, I'm hoping that someone from the NWI development team sees this suggestion. I don't think it'll be that hard to add in an option to edit and delete loadouts.

I'm serious, I'm no programmer at all, but this option seems like something to easily implement. No changing/balancing the entire gameplay or restarting the entire game's structure from the ground up, just opening the option to edit something already in the game.

If I'm wrong about this, then I'll say sorry ahead of time. Despite that, my suggestion is not asking for new weapons, gameplay rules, balancing rules, graphics, player models, weapon balancing, etc., I only want to fix my spelling mistakes for the loadouts I'm stuck with either by editing or deleting them.

BlueMouse Reply Quote
to delete loadouts in a jiffy and a double-click to edit the title.

That would honestly make me so happy to continue playing. BETA2 would be SO BEARABLE for me personally.

@BlueMouse Oh yeh I have some slight OCD tendencies when it comes to classes and stuff, but, not so much in this game. I'm more worried about the game itself because I want another great military FPS game to sink into, I haven't sunk into an FPS in a loooong time (talking about 6+ years, I was burnt out from CoD/BF back in the days of the Xboc360 ahah).

I hate having to rename things the same as I named them in the alpha to replace the setup.

I came to the forums just to post this very request. I'm sure it will be in the final release but hope to see it in a beta update soon as it is a very useful and needed feature.

In the meantime...these load outs have to be saved somewhere right? Is it possible to delete them from wherever they’re saved in the files? (A lot like how everyone was supposed to delete their character customization files after the alpha)

I support that request !

So I went looking for it, and apparently it doesn't exist anymore. In Beta 1 there was a "Loadouts" tab that was accessible from the "Customization" section in the main menu, and from the post-match screen. Clicking on it lead to a screen that just said "Coming Soon" so clearly it isn't finished yet, but I assume it'll be in the same place when it's completed. It looks like something that is absolutely planned, but hasn't been completed in time for beta.

Here's a screenshot I found online showing one of the old locations for it: