Roots of Innocence - A Tale As Old As The Hills
This topic has been deleted. Only users with topic management privileges can see it.

Welcome to our Roots of Innocence series of articles, where we unveil more details and info about the making of A Plague Tale: Innocence, the upcoming adventure game by Asobo Studio coming 2019 to PlayStation 4, Xbox One and PC.

A Plague Tale: Innocence takes place in 1349 during a period of turmoil in France. War and disease ravage the country, creating a great setting for the team at Asobo to tell the story of Hugo and Amicia De Rune, our two protagonists. 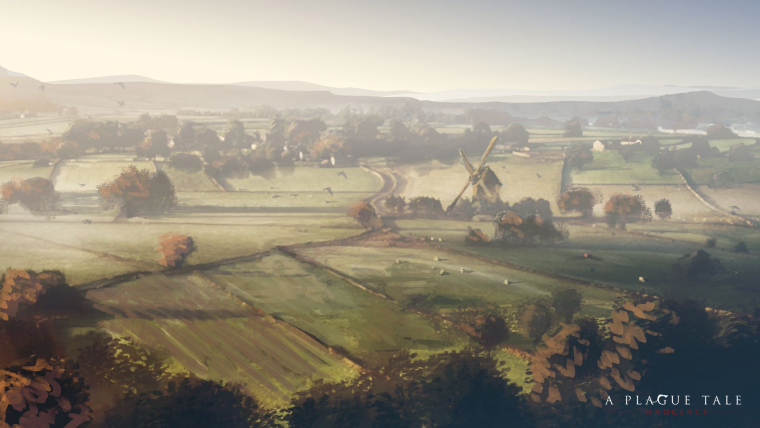 What interested the team at first was the clash between the innocence of children and adversity: war, disease and death. The 14th century and its epidemic bring a lot of opportunities in term of scenery, characters and story. It’s a good period to introduce alchemy to as well, which suits better to the authentic tone of the game chosen by Lead Narrative Designer Sébastien Renard. Alchemy allows us to feature upgrades and improvements to the projectiles used in-game, while staying realistic.

To help the team to picture the environments the player will travel through, Art Director Olivier Ponçonnet and Artist Damien Papet produced concept art of the landscapes and settings inspired by real life spots close to the studio in the South of France. Some concepts have become actual places in the game, while others are only references for the team.

The 14th century is a very brutal time. Great empires are collapsing, the Hundred Year’s War is raging between the Plantagenets and Valois families and the Black Plague is decimating the population. Despair pushes the survivors to burn entire villages to stop the scourge, but it’s already too late and the dead quickly outnumber the living. The Black Plague will spread everywhere in Europe, killing 26 million of people, half of Europe population. At the start of A Plague Tale: Innocence, the plague has just reached the South-West of France and is getting closer and closer to the De Rune Castle, the homeland of our heroes.

The design team have put a lot of work into translating the setting into the game. Lead Game Designer Kévin Choteau explains that it’s the difference between realism and reality: the toughness and dirtiness of this time is so far away from our modern frame of reference that it has had to be filtered to reach the player. If the game were an exact replica of the reality back then, dialogue would be incomprehensible, and the violence would seem ludicrous and gory.