Faction Trailer & New Release Date
This topic has been deleted. Only users with topic management privileges can see it.

Originally planned for a release in September, Battlefleet Gothic: Armada 2 will finally land on PC in January 2019. These couple of additional months of development will allow the team to polish the game and add extra content for the game's release!

In order to involve players during this extra development phase, we’ll organize not one but two pre-order betas. More details about the dates and content of these pre-order betas will be communicated shortly. 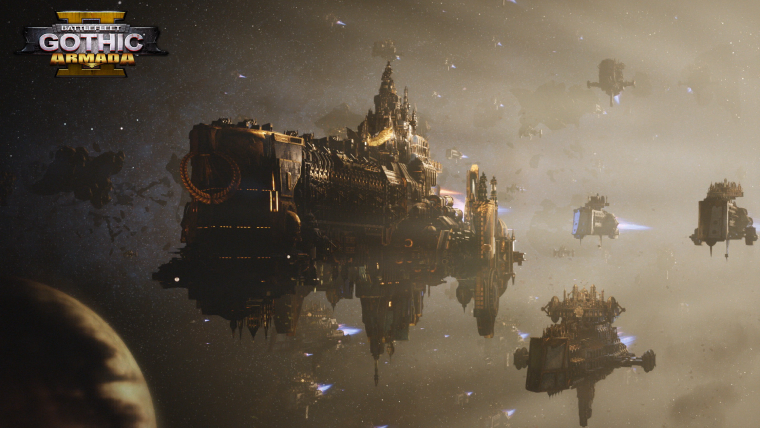 See all the fury, glory, and fear of the 41st millenium’s deadly space battles in the new Faction Trailer for Battlefleet Gothic: Armada 2. The enigmatic Necron collector Trazyn the Infinite narrates the trailer, perusing his hoard of the galaxy’s most mysterious artefacts and fearsome warriors, introducing you to each in turn.

Set after the devastating events of the Gathering Storm event wreaked havoc upon the universe of Warhammer 40,000, Armada 2 features every faction from the original Battlefleet Gothic tabletop game. Each one has been updated and revised for the modern setting with new ships, new lore, and the same bloodthirsty need for galactic domination. Whether you’re a fully corrupted Chaos cultist or a fan of the ever-curious, never-outgunned Tau, you will find a fleet for you within Trazyn’s archive.

Battlefleet Gothic: Armada 2 is available for pre-order on Steam, offering Beta Access before the release of the game, and a 10% discount!

Woooooooooooo Trazyn. Best faction's best boi gets to narrate the trailer it seems, and its beautifully done to, thanks for alerting us and delivering some new content! The second beta is a nice trade off, and I have to ask, are some new necron ships going to be in that extra content? And what was that necron battlestation looking thing in 0:46-0:48? Well, either way good job, and keep and the good work.

kinda pissed off that the devs do this at the last moment and dont even update their main website. Still says September. and given we dont even have a beta for us people that pre-ordered is sad.

Battlefleet Gothic: Armada 2 is available for pre-order on Steam, offering Beta Access before the release of the game, and a 10% discount!

Does this mean we should expect an open beta some time soon?

I'm so happy that those who should truly rule the universe and not just the galaxie are back in a game.

Ty for that. Who cares about one or two months of more development time if we get a game closley without glitches and bugs.

The communication is extremely low here making me worry about the development getting further pushed back.

The last game was also delayed, and no it didnt help

@Lucinator That may be, it was in not even a bit self explaining and for sure it's a stupid concept to get big ships at least better work with diffrent upgrades. That may would've attracted more people.. many things we could talk about but in the end i won't loose the hope for this one getting much more userfriendly. I mean the way you had to controll the ships was absolutly horror sorry but really. xD But whatever i'm not gonna loose my hope.

The communication is extremely low here making me worry about the development getting further pushed back.

Yeah, that's always been the problem with these guys. The games themselves are good, but the company is aggressively bad at community management. It's literally the only reason I never bother recommending them my other gaming friends. I can suggest they join with this community that seems to be actively hated by the publisher, or they can go to Total Warhammer and have Sega in contact with the community basically 24/7.

Pretty easy recommendation which one to suggest.

The devs (especially Ugo!) are actually pretty active on the closed beta discord. We chatted with Ugo a lot about game balance and stuff.

The devs (especially Ugo!) are actually pretty active on the closed beta discord. We chatted with Ugo a lot about game balance and stuff.

Which is all well and good for those few folk, but most of us don't have access to that.

@romeo I understand the frustration, and the worst part is the activity on the closed beta discord is really good so the guys who are meant to be talking could be really good community managers... if they where allowed to talk.

@jamodon Are they still active? There's been a couple pieces of feedback I really want them to hear.

I like it immensely. It has lots of complex fleet composition and I'll try to play multiplayer now, as I've finished all 3 Campaigns.