New Insurgency: Sandstorm video features and Closed Alpha coming soon!
This topic has been deleted. Only users with topic management privileges can see it.

We’ve been very quiet over the past few months busily working away on development of Insurgency: Sandstorm, the sequel to our award winning Insurgency franchise coming to PC, PS4 and Xbox One next year!

As 2017 draws to a close we are excited to start sharing more progress with you and over the coming weeks will be producing a series of short videos and posts highlighting some of the exciting new features you can expect in Insurgency: Sandstorm next year, along with details on how to get involved with the closed-alpha in a few weeks’ time.

Here is the first in a series of short videos about some of the upcoming new features and improvements being developed for Insurgency: Sandstorm:

This first video shows a work in progress mechanic where two player classes who coordinate together can call for 'Fire Support'. This can come in various forms such as helicopter minigun air support, which can be shot down.

Be sure to follow our accounts on social media to stay up to date with all the latest news! 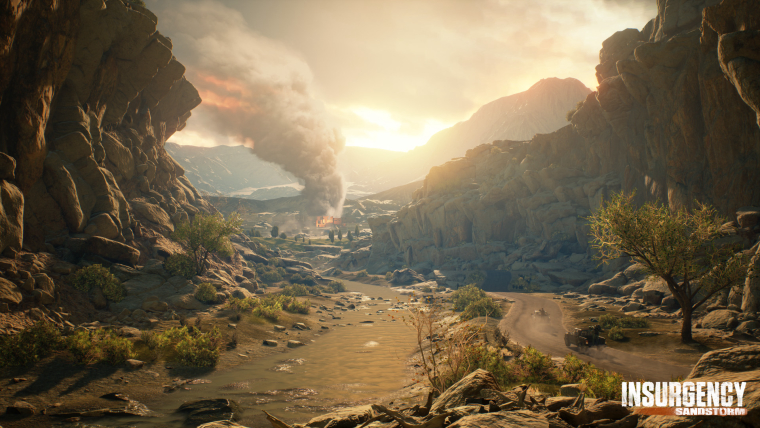 Can't wait until we see more.

Keep it up guys, great stuff! Where my Blackblast mechanic? You can get yourself killed from Blackblast in real life.

last edited by
I
I
insurgent Reply Quote

Feedback: I think the heli could come down a little faster and I really like the explosion

Can't wait to see more of that stuff

Couldn't help notice that grenades weren't in the weapon selection, does that mean nade's are assigned to a key press (G for example) or that particular class didn't have a grenade?

can't wait! the alpha should be fun.

How to get to closed alpha?

How to get to closed alpha?

We'll release more details about the Alpha process soon. Stay tuned to social networks and this forum not to miss any announcement. Have a nice day! we are waiting so long,

@vincenthorgan seems unlikely, as there's a lot more work required for such, especially when it comes to builds/updates

Console testing sessions are still being discussed. Nothing decided yet. Stay tuned here and on social networks not to miss any announcement about that. Have a nice day!

@vincenthorgan Put the console aside and build a PC dude! That way the devs can divert their attention and focus on the game and on one platform.

Other companies try to maximise their profits by releasing their game on XBOX and not working on their NETCODE.. I will not name the game but maybe you know it

last edited by
A
A
adhilhabib Reply Quote Hi, I check the mailbox every day, even after ten times a day, best regards

Best tactical fps for 2018, pretty sure