Meet the Fiery Popcorn Pole!
This topic has been deleted. Only users with topic management privileges can see it.

Our hardcore action RPG The Surge is set to be enriched even further with the release of a major new expansion: A Walk in the Park, coming December 5th to PS4, Xbox One and PC.

In the run-up to release, we decided to present you some of the 16 all-new weapons, sets of armor, and implants to upgrade and further customize the way you want to play. 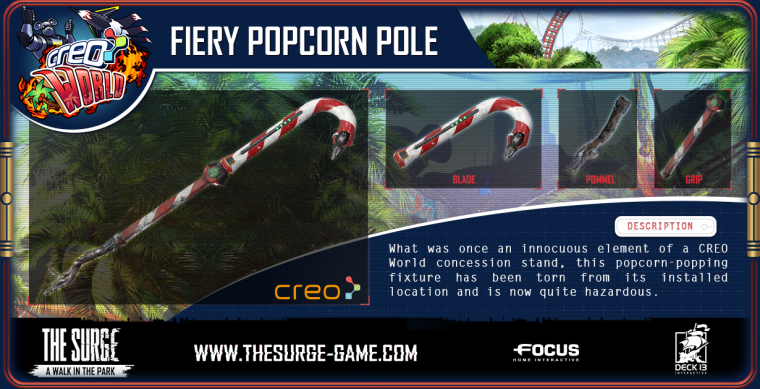 What was once an innocuous element of a CREO World concession stand, this popcorn-popping fixture has been torn from its installed location and is now quite hazardous. Exposed wiring has ignited its residual gas supply, so extreme caution should be exercised when wielded.

Warren can use this pole as a staff suiting CREO World's loony asthmosphere - he will find the giant candy cane hidden in the park.

The Surge: Complete Edition and A Walk in the Park will be available December 5th on PS4, Xbox One and PC. Pre-order now: http://bit.ly/TheSurge_CompleteEdition