Meet the ASTir Plasma Augur!
This topic has been deleted. Only users with topic management privileges can see it.

Our hardcore action RPG The Surge is set to be enriched even further with the release of a major new expansion: A Walk in the Park, coming December 5th to PS4, Xbox One and PC.

In the run-up to release, we decided to present you some of the 16 all-new weapons, sets of armor, and implants to upgrade and further customize the way you want to play. 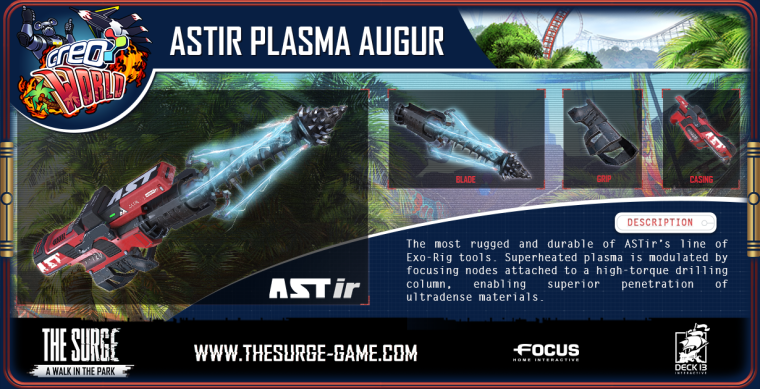 The most rugged and durable of ASTir's line of Exo-Rig tools, the Plasma Augur is an advanced application of ASTir's industrial plasma tech. Superheated plasma is modulated by focusing nodes attached to a high-torque drilling column, enabling superior penetration of ultradense materials.

A powerful heavy weapon, acting similarly to a hammer or mace, Warren will find the ASTir Plasma Augur on crazy exoskeleton employees in CREO World.

The Surge: Complete Edition and A Walk in the Park will be available December 5th on PS4, Xbox One and PC. Pre-order now: http://bit.ly/TheSurge_CompleteEdition